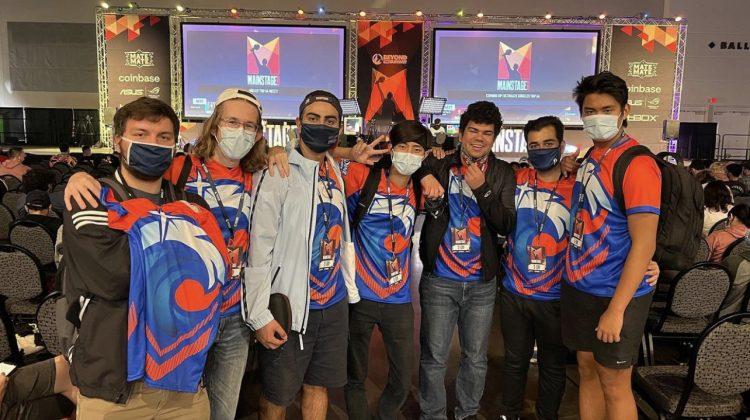 The Pepperdine “Super Smash Brothers Ultimate” team participates in Mainstage, a competitive tournament, in November 2021. The team saw an increase in interest and participation during and after the semesters students were engaged in remote learning. Photo courtesy of @PeppEsports Instagram

The world’s first gaming console, the Magnavox Odyssey, debuted in 1972 and launched what would become a booming global industry worth over $138 billion in 2021.

Video games have been popular since their early days, but in recent years, they’ve hit new highs, with the number of people who play them growing from 1.99 billion in 2015 to 2.81 billion in 2021.

The founding of the Pepperdine Esports team in fall 2019 reflects this recent surge in gaming popularity, and offers interested students an outlet for competitive play on campus.

“It’s something that we can put passion into other than just messing around with our friends,” senior Nick Santomassi said.

Esports refers specifically to “the world of competitive, organized video gaming,” according to CNN, which the Pepperdine Esports team engages in through their tournaments and competitions. The world of gaming encompasses this arena as well as general, casual gameplay for leisure or entertainment.

Santomassi is a member of the “League of Legends” team at Pepperdine, one of four game-specific teams that compete, along with the “Super Smash Brothers Ultimate,” “Overwatch” and “Valorant” teams.

While the program has been active since 2019, it saw major growth in interest and participation due to the pandemic and remote learning, Esports Team Manager and Pepperdine law student Grace Ramsey said.

“We were one of the few things that was still happening,” Ramsey said. “It was one of the few ways that you could still really interact with Pepperdine on a weekly basis, through streaming ‘League of Legends’ which is what we primarily did through COVID.”

The Esports team’s experience with growth in streaming viewership during the pandemic was not unique — streaming as a hobby and an industry grew exponentially while people stayed home.

From March to April 2020, the streaming platform Twitch saw a 50% increase in total hours watched by users while stay-at-home orders in the U.S. were at their height, according to the Verge.

“I think it’s a great avenue for people that don’t like to play but like to watch,” Santomassi said. “It’s similar to sports, like if you don’t play the sport but you want to watch.”

As gaming continues to grow in popularity and the industry booms, Ramsey said they aspire to work in the emerging field of video game law. While their own professional goals revolve around gaming and they continues to play in their spare time, Ramsey said establishing a game-life balance is very important.

“We try to preach a message, both to our team members and to the broader Pepperdine gaming community, that you can still have gaming as a hobby during college, but you need to balance it with your academics, with getting enough sleep, with eating healthy and working out and doing all these different things,” Ramsey said.

While video games are becoming increasingly mainstream and the gaming industry is hitting new highs, Santomassi said there is still a stigma that comes with the hobby, as there is with anything people don’t know enough about. He said he hopes people can continue to see video games as a form of entertainment that is fun to engage with, and to watch professionals in the field hone their craft just like any other sport.

“That’s kind of what I’d want people to understand about people playing video games,” Santomassi said. “Like it might seem childish, but it’s someone’s passion.”