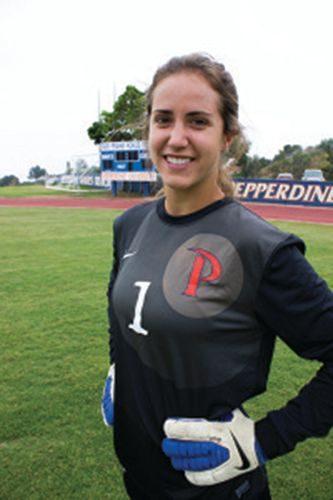 The average person is likely to avoid any circumstances in which balls are kicked at speeds of 70 miles per hour, but freshman Hannah Seabert is hardly average.

Seabert is the starting goal keeper for the Waves in her first season. In high school she faced down and saved 277 shots, including 31 shutouts. One could say she enjoys what most fear.

Seabert has already left a mark on the West Coast Conference Individual Rankings. She is number one for overall saves with 53, first in save percentage (.883) and first in saves per game (7.57). She is also second in shutouts (3.0) and fourth in shutouts per game (.43).

When asked what it is like playing at such a high intensity position, Seabert explained the thrill: “I love playing goalkeeper. I love the intensity of it and the do-or-die type situations. It can be stressful and physically, as well as mentally taxing, but I like to be pushed to my limits. To keep calm I just focus on the ball and be aware of my surroundings. It is a lot easier to do my job if I can do that.”

Seabert’s roots are in Redlands, Calif. She attended Woodcrest Christian High school where she played varsity soccer for four years. She left her legacy in the form of single-season 2011-12 school records in goals against (11), goals against average (0.52) and shutouts (21).

She was inducted into the 2011 Riverside Sports Hall of Fame as the top high school athlete. She also earned three All-CIF honors and an All-Ambassador League selection. While demonstrating her vitality on the field, she lettered in two other sports and participated in the National Honor Society all four years.

“I don’t like to give anything less than 100 percent in what I do,” Seabert said. “I put my mind, body and spirit into everything. Go big or go home.”

That passion bloomed from a love for the sport at a young age, “I started soccer when I was 10. I only played soccer at recess for fun until one of our supervisors told me I should try out for his daughter’s team. Right away I loved playing and learning the game. I liked the physicality and speed of the sport.”

Seabert found Pepperdine to be the program she best aligned with. The coaches and team’s accomplishments drew her in. She is majoring in sports broadcasting to expand her knowledge in the field of athletics.

“The team chemistry is amazing,” Seabert said. “We are a family who connects on and off the field. I am so thankful for the opportunity to play with this group of girls and be a part of the program.

“After graduation I would love to continue to play soccer whether it be here in the U.S. or internationally. If I am not playing soccer then I hope to be a reporter for ESPN.”

Seabert refuses to settle after earning a starting spot on the field as a freshman in such a high-stake position.

“I honestly just want to be the best soccer player that I can be,” Seabert said. “I have already improved so much from being here and I know that I have so much more to learn. If I were to set any records that would be awesome.”

In the years to come, there will be countless speeding soccer balls and obstacles thrown at Seabert. Regardless of the circumstance, Seabert will keep her eye on the ball every time. 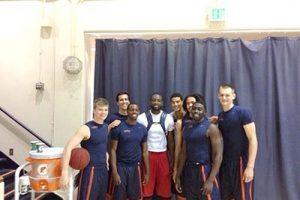