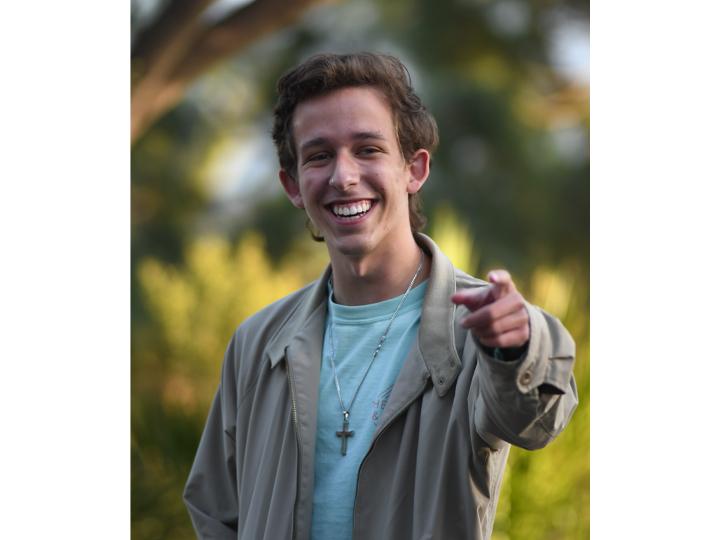 First-year Colin Wiese poses for an impromptu photoshoot on Pepperdine’s Malibu campus in March. He lived at home during the fall semester, so he said he was ready to take the next step and come to Pepperdine to start finding out his purpose.

First-year Integrated Marketing Communication major — soon to be Religion major — Colin Wiese said he realized he wanted to pursue a career in ministry after moving from Livermore, Calif., to the Malibu campus this semester after qualifying for a hardship exemption. Since fall 2020, he found ways to unite his fellow classmates while pursuing his faith.

Wiese is involved with worship at Vintage Church in Malibu and the Well at Pepperdine, in addition to leading his own Bible study. He said these experiences and his first-year seminar class, “Living a Life of Purpose, Service, and Leadership,” taught by Dean of Students Professor Mark Davis, is part of the reason he is changing his major from IMC to Religion.

“I wanted a church when I came down here that I could plug into and serve as opposed to just going as a consumer,” Wiese said. “And so I think I’ve been really lucky to have that at Vintage advantage because it’s such a family, communal atmosphere there.”

Wiese said his first-year seminar was the best class he’s ever taken, largely due to the close-knit environment Davis fostered.

“It was kind of an outlet for us to just be with each other and get through the struggles of the semester together and become such a family,” Wiese said. “Davis is so good at making people feel welcome, and making it an environment full of inclusion and appreciation for each other and love.”

While Wiese found a great community within his first-year seminar, he said he realized that many of his classmates did not share his experience. The most difficult thing about the pandemic, Wiese noticed, is the feeling of loneliness people are experiencing.

Wiese said he tried to remedy this in a small way by creating a Google form for the Class of 2024 that collected the names, ages and locations of his classmates. He posted it on the Pepperdine Class of 2024 Facebook page during the first semester.

He received hundreds of responses and compiled a spreadsheet of the information so people could see who lived near them. Wiese said first-years in Nashville, Tenn., met up with each other because of it, and another person met their current roommate from the spreadsheet.

“That was really encouraging to know that even amidst all of this, that we’re still a family,” Wiese said. “And we can still, if we put an effort forth, take this step to be a community with each other.”

He also built a community by creating a local Bible study through the YouVersion Bible App. It started as a weekly meeting with five or six friends, but grew to 15 to 18 people regularly, Wiese said.

“It just kind of felt like church camp where we’re always meeting and having deep conversations about life and how to love each other better and about the Bible and adding worship,” Wiese said. “We’re not just bonding, but we’re bonding through Christ and there’s so much purpose in that.”

The Bible study meets safely just behind Urban Outfitters in the Malibu Country Mart. The group grew so accustomed to meeting weekly that they feel noticeably different when they don’t meet for a socially-distanced gathering. He said he is proud of the community that resulted from this and the reliance they developed on the Bible.

“Praying over people and going to church and having these conversations about what we’re made to do and actually being able to live that out and study the word together, I want that for the rest of my life,” Wiese said.