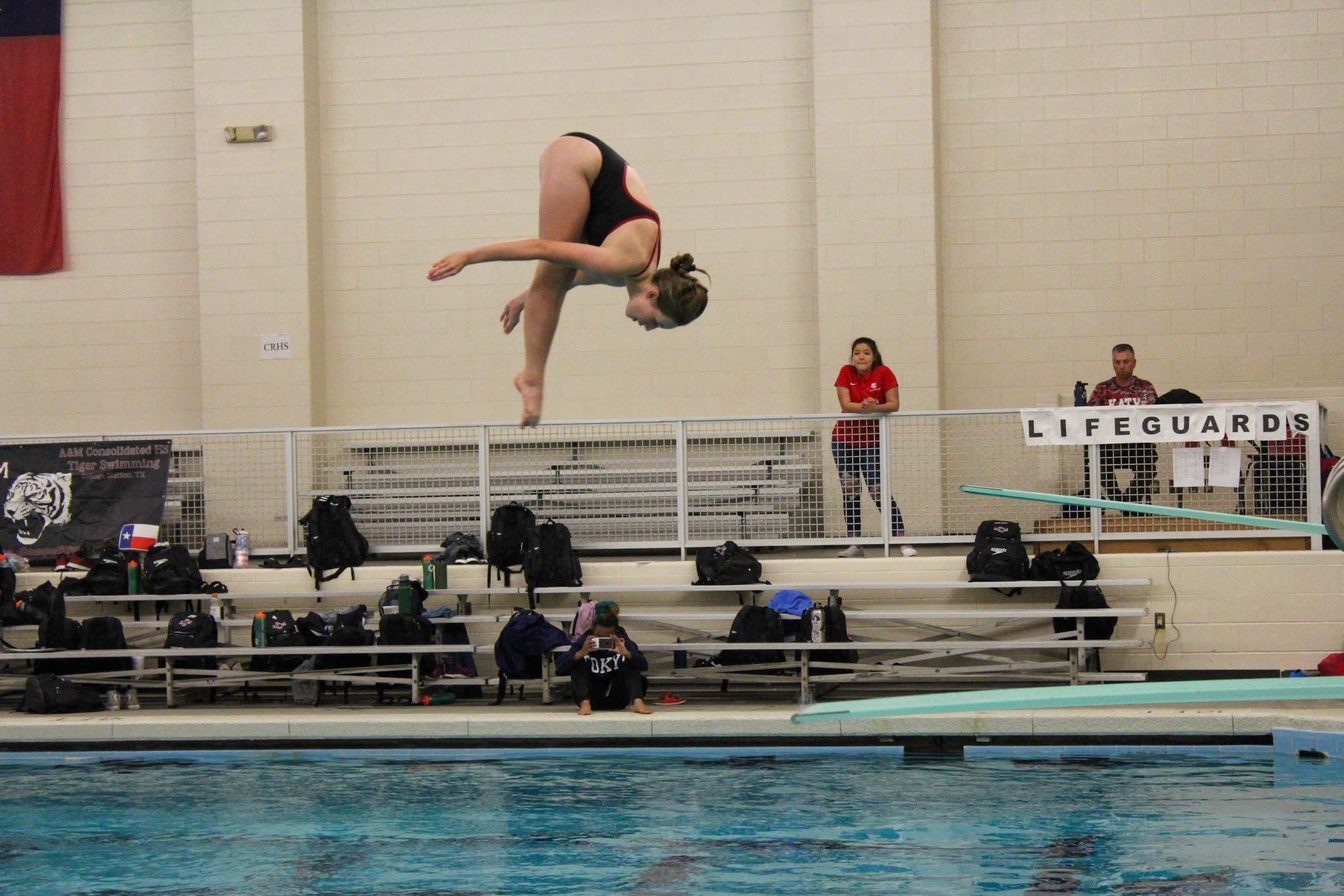 Diver Brianna Cannon performs her favorite dive during senior night. She participated in many meets throughout the season.

First-year student Brianna Cannon has been an athlete for the majority of her life, participating in several different sports and now continuing her career on Pepperdine’s Swimming and Diving team.

Cannon said a big part of her decision to attend Pepperdine was the opportunity to continue her career as a swimmer and diver on Pepperdine’s team.

“If I was going to dive in college, I wanted to dive at Pepperdine,” Cannon said.

Even though Cannon is an experienced swimmer, she did not begin her diving career until she began high school.

“I’ve been swimming my whole life,” Cannon said. “So I started diving freshman year, and turns out I’m better at that.”

Cannon said she had to work up the nerve to email the swimming and diving coach to ask about joining the team. During her senior year, the coach agreed to let Cannon be on the team once she got into Pepperdine.

“[Being on the team] was a big thing for me,” Cannon said. “I wanted to keep diving.”

Cannon wrote in an email that she was supposed to move onto the Malibu campus Aug. 8, but a last-minute Los Angeles County ordinance denied athletes the ability to train on campus. Even though Pepperdine had created a plan for athletes to return to campus, she found out less than 24 hours before her flight that this plan had been changed.

“I was so sad,” Cannon said. “I was literally supposed to leave the next morning, so all my stuff was packed and by my bedroom door. I was ready to go.”

Cannon said athletes living on campus are now permitted to train in very small groups because they qualify for a hardship. There are four phases to bring back athletes on campus; Pepperdine is in phase one, which will last at least four weeks, but the phases can be extended at any time.

“It definitely depends on LA County,” Cannon said. “I know that they’re trying to push it to where everybody comes in September or hopefully by October [to train], but I wouldn’t be surprised if we just came back in the spring.”

Cannon said she is staying home in Katy, Texas until Pepperdine receives permission for athletes to return. Even though she isn’t training at school, she is staying in shape with at-home workouts that her coaches provide. The workouts start slow with body-weight exercises and basic workouts.

Cannon said online classes bring about some concerns for her, as it will be a completely different school experience.

“I personally am a better learner when it comes to being in person because I like to sit there and be like, ‘Excuse me, I have a question’ and get it answered right there,” Cannon said.

Despite these difficulties, she said she is very excited about the idea of studying abroad in Florence, Italy, if possible.

As a Political Science major, Cannon said she has big goals after graduation and wants to go to law school, specializing in either civil rights or corporate law. Her dream law school is Pepperdine’s Caruso School of Law.

“It’s a really good school for law, especially, and that’s what I wanted to do,” Cannon said. “All of it just came together perfectly.”