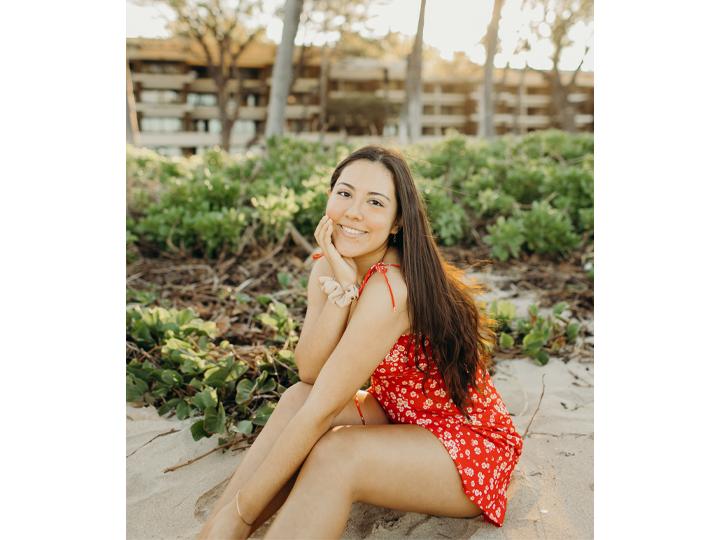 First-year Terra Hernandez poses for her senior portrait in January 2020 at Mauna Kea Beach, Hawai’i. Hernandez said she lived in Hawai’i her whole life until moving to Malibu in January.

After competing on the debate team throughout high school, first-year Terra Hernandez decided to double major in Political Science and International Studies. She said debate helped open her eyes to world issues and made her interested in politics and foreign policy.

“I’m interested in politics and our political system because it shapes so many aspects of our everyday lives,” Hernandez said.

Through double-majoring, Hernandez said she hopes to discover if she prefers U.S. or international politics. She’s currently leaning toward foreign policy but wants to keep her options open.

“My teachers in the Political Science and International Studies Division have made my major so interesting and make learning fun,” Hernandez said.

Hernandez said she planned on attending college in a big city on the mainland, but soon realized the transition from her hometown in Kailua-Kona, Hawai’i, to a major city would be too extreme. To get a taste of life in a big city, Hernandez decided to join the Global Fellows Program and do a semester in D.C. along with studying abroad in Buenos Aires, Argentina next year.

Along with joining Pepperdine Waves Debate, Hernandez met a lot of other students through her involvement in the sorority Alpha Phi.

“Joining a sorority really helped me get to know more people and especially older girls that I wouldn’t have known if I wasn’t in a sorority because we’re not on campus,” Hernandez said.

“I’m first-generation so I thought it would be nice to have that community on campus and get access to resources that I didn’t know existed,” Hernandez said. “The club has helped open up more doors.”

Hernandez moved to Malibu this semester and she said one of her favorite memories is meeting everyone she talked to on social media in real life.

“I can go see my friends in between my class break, so it’s been nice and I can structure my day more without being tied down to campus,” Hernandez said.

Hernandez had the chance to go on campus the day it opened, where she said she ate Chik-fil-A and met President Jim Gash.

“It was a celebrity moment,” Hernandez said.