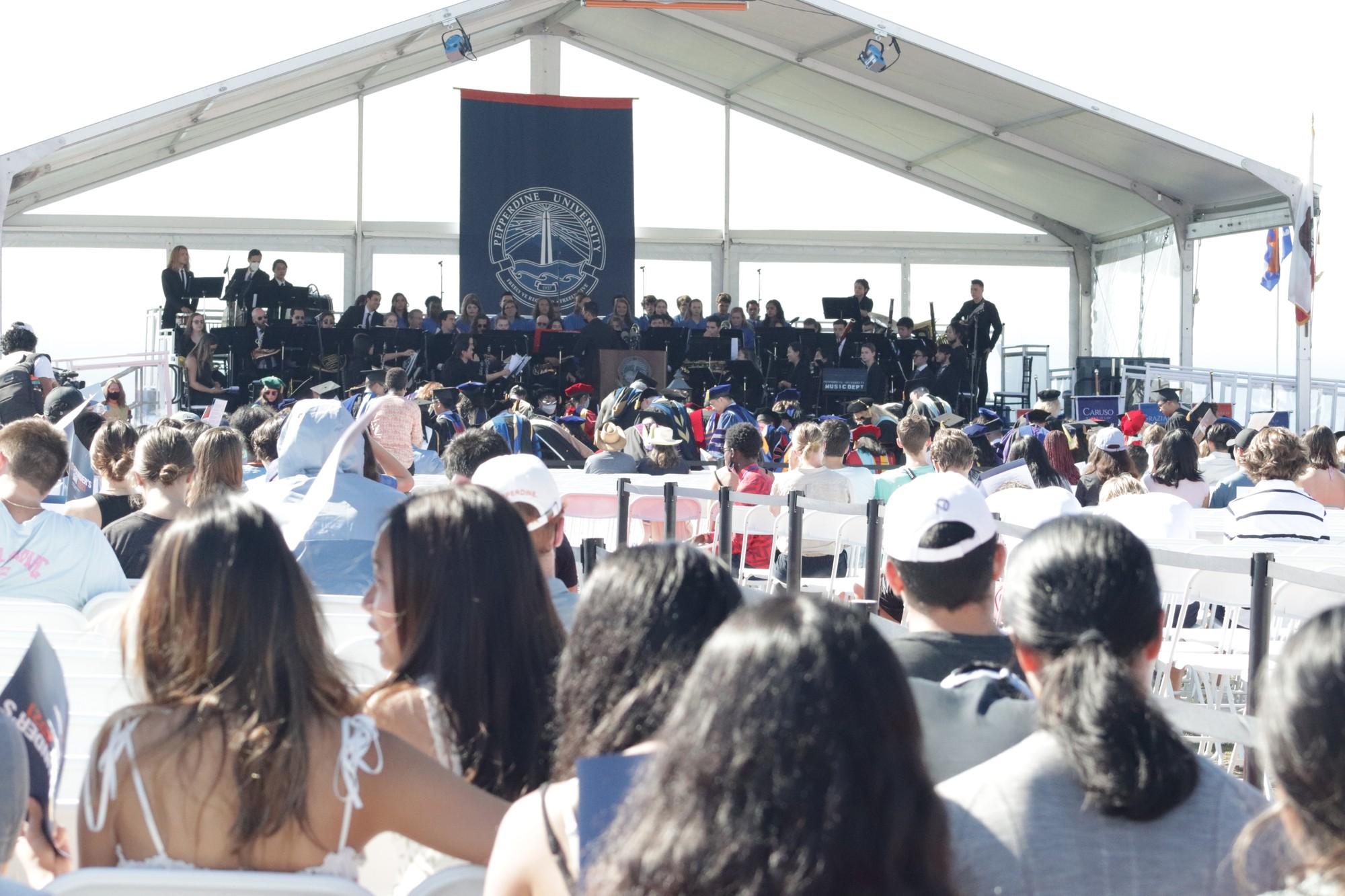 The annual event serves as the official kickoff to the academic year and allows attendees to celebrate and honor the legacy of Pepperdine’s founder, George Pepperdine.

“It reinvigorates my spirit to come back and see what they’re doing and how many people have changed this place and really made it something special,” said Mary Ellen Pepperdine Oswald, George Pepperdine’s granddaughter, Seaver (’00) and Graziadio (’01) alumna.

Pepperdine began its first academic year Sept. 21, 1937, after George Pepperdine delivered his vision for the school.

Founder’s Day is a traditional day of celebration to both honor George Pepperdine’s impact on the University and allow students, alumni, faculty and staff to gather together to learn more about the school’s history.

After a year and a half of online learning, President Jim Gash said he felt this year’s Founder’s Day was particularly significant.

“It’s especially a joyous occasion this year, as we welcome back to campus — the return of our students after 18 months away,” Gash said at the ceremony.

The hour-long event included performances by Pepperdine’s wind ensemble and women’s chamber choir, a President’s Address and the recognition of the University’s new provost, Jay Brewster.

Gash also welcomed Kimberly Hill, Olympic gold medalist in volleyball in the 2020 Tokyo Olympics, to the event. Hill graduated from Seaver College in 2012 and is the first female gold medal recipient from Pepperdine.

Hill said in the past, she was usually traveling to games or practicing volleyball during the Founder’s Day events at Pepperdine when she attended school, so she said she was honored when Danny DeWalt, vice president and chief of staff, invited her to come back to campus for the occasion.

“To be around and see the wholeness of Pepperdine as a University and to see the talent of students and how much faculty and staff are wrapped up in kind of one day — it just emphasizes how special this university is, and it makes me proud to be a part of it,” Hill said.

Hill led the Pledge of Allegiance at the event, and Gash awarded her with a golden volleyball to celebrate her achievements.

Dee Anna Smith, member of Seaver alumna (’86) and chair of the Board of Regents, delivered the original dedicatory address from 1937.

“I’m endowing this institution to help young men and women to prepare themselves for life of usefulness in this competitive world and help them build a foundation of prosperity, which will survive the storms of life,” Smith read from George Pepperdine’s original address.

Pepperdine Chamber Choir sang the new alma mater, singing the lyrics, “We will climb, we will dare to dream / The light of the lantern, it will shine through me.”

The event included the lighting of the lantern that sits on main campus next to the George Pepperdine statue, representing the start of a new academic year in person. Five representatives — one from each of the five schools on campus — lit the bulb, and Gash said that lighting the lantern will be a new tradition for each Founder’s Day celebration.

“The light from that lantern symbolizes many things,” Gash said to the audience. “Knowledge illuminating the world, a sense of direction, a clarity of purpose. It represents Mr. Pepperdine and his abiding faith — a faith that inspired the creation of this University.”

Founder’s Day wrapped up with the unveiling of the NCAA Men’s Golf Championship trophy, after the team’s victory in Scottsdale, Ariz., on June 2.

All first-year and sophomore students had to attend the event for credit for Seaver 200, and the Hub for Spiritual Life was a part of the welcoming committee to the event alongside the Pepperdine Ambassadors Council.

Sophomore Naomi Yoder was a part of the team from the Hub and said she hoped to show a warm welcome to all of the attendees at the event, as well as learn more about the history of her University.

With Founder’s Day being one of the first large gatherings on campus since the shutdown, neither masks nor social distancing were required. The event was outside, and the majority of attendees were students who are required to get a negative COVID-19 test each week.

“Our community is largely vaccinated, so I feel safe and comfortable here,” Tamilore Daniels, Student Government Association senior class senator, said. “I’m excited to see everyone back in person.”