The sound of traditional Argentine music roars from the piano keys, violins and bandoneóns on stage and travels throughout the theater while pairs of dancers move their bodies passionately to the rhythm. As the curtain goes down the audience claps furiously. Some yell “Bravo!” and the sound of approving whispers echo in the air.

These are the sights and sounds of Luis Bravo’s “Forever Tango” at Wilshire Theatre in Los Angeles. 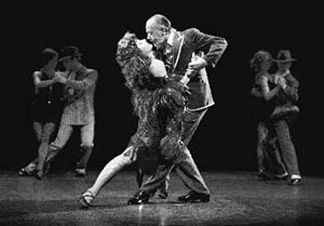 Early tango was born in the barrios of the port sects of Buenos Aires. The conditions of lower class living and their plight was expressed through dance and evolved to what is contemporarily known as the passionate and sensual tango. Eventually it became widely accepted among the upper classes and today tango is one of Argentina’s trademarks.

The two-act performance features 14 dancers and an 11-member orchestra. The company entertains the audience with 20 tango dance numbers and seven musical solos by the orchestra.  Famous Argentine singer Carlos Morel also has a few solos, in addition to dancing with the other cast members.

The striking choreography of the show combined with improvisation, humor, passion and energy symbolize the spirit of tango.

“The tango is a feeling that you dance,” creator and director Luis Bravo said in a press release. “A story you tell in three minutes. It’s passionate, it’s melancholic. It’s tender, it’s violent. You dance it with somebody — but it is so internal, you dance it by yourself. The tango represents more than just a dance — it is also a music, a culture, a way of life.”

The show demonstrates the talent of tango dancers, as well as the orchestra that accompanies them. The spirit of the music is energizing and the dance exemplifies the Argentine culture, as well as the wave of emotions — love, laughter and sadness — that are known by all humankind.

“Forever Tango” debuted in San Francisco in May 1996. There it broke San Francisco box office records for a touring musical. In 1996 and 1997 the group toured all over the world, performing in major cities such as London, Chicago, San Diego, Los Angeles and Boston.

It found a temporary home at Broadway’s Walter Kerr Theatre in 1997. Its Broadway run was extended due to its success and the group relocated to the Marquis Theatre.  In August 1998 it left Broadway after a year, known as the longest-running tango show in the history of Broadway.

Since then, “Forever Tango” has toured North America and has now returned to the Wilshire Theatre in Los Angeles through Sunday.

Tickets are available at Ticketmaster outlets, Robinsons-May, Wherehouse Music, Tu Musica, Ritmo Latino and the Wilshire Theatre Box Office. Tickets range from $29.50 to $49.50 and are worth every penny.

Every time a bell rings...