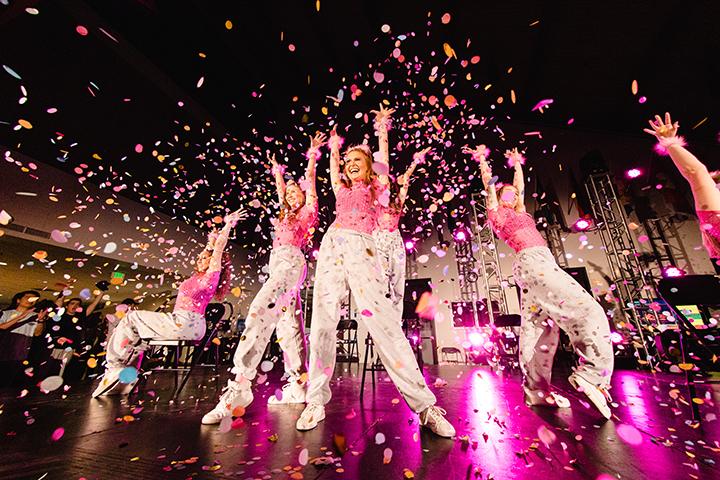 For the 13th consecutive year, Psi Upsilon hosts Psi U Think You Can Dance (PUTYCD), packing the Caf with students eager to cheer on their friends for charity.

Its founder, Sam Schmidt, was a successful Indy 500 race car driver before a life-altering crash left him paralyzed. In the 20 years since, he has molded CPN into an international leading authority on spinal cord injury research and treatment.

Long before Schmidt’s work with CPN, he was a founding member of the Lambda Omega Sigma chapter at Pepperdine, which eventually became Psi Upsilon. With Schmidt’s help in 1983, Psi Upsilon became Pepperdine’s first Greek fraternity.

“We like to think this cause is closer to our hearts than any other thing we could have chosen,” junior Gavin Duvall, Psi Upsilon’s philanthropy chair, said.

At the competition, stakes were high as sororities competed to dethrone Delta Gamma, whose wins span multiple consecutive years. Kappa Alpha Theta (Theta) ultimately came out as the winner of both the dance competition and overall philanthropy.

Junior Christina Stratton led the team, which practiced from 6 to 9 p.m., three days a week, since the start of the semester. Stratton, Theta’s chief external affairs officer, performed in PUTCYD the past three years, but this was her first time as the team’s choreographer.

“I grew up dancing 20-plus hours a week, and now, this is my only opportunity to perform, so I really do look forward to it every year,” Stratton said.

Theta has won the overall philanthropy competition for nine consecutive years but has never won the dance competition.

“Typically, we get second or third place,” Stratton said. “This year, I pulled out all of the stops to secure the win. We tried to find crowd-pleasing music, do flips and tricks, incorporate the mission of CPN by dancing with chairs and even throwing confetti at the end.”

Despite Stratton’s determination to take home first prize at the dance competition, she said she was most concerned about Theta’s contribution to the philanthropy itself.

“The real purpose of this event was to raise money for CPN, so I was proud that all of the Thetas came together to raise money and awareness of the cause,” Stratton said.

Although Delta Gamma did not come out on top, the sorority still wowed the judges and won second place. Tri Delta placed in third.

In the fraternity category, Alpha Tau Omega (ATO) was victorious, winning the first place prize for the sixth year in a row.

“The whole thing truly was not about winning, it was about raising money for the organization,” ATO performer and junior Nick Donahue said.

Donahue said they were firm in “drilling” their freshmen performers to be more concerned with raising awareness for the cause and having fun than winning the dance. Second-place winners Alpha Phi Alpha “always love performing in PUTYCD,” junior Justus Bell, Alpha Phi Alpha social chair, said.

“It gives us a platform to display some of our culture since we’re new to campus, all while supporting a great cause,” said Bell.

Freshman Psi Upsilon member Christoff Schoeller named the event’s atmosphere, community and “close-to-home cause” as main contributors to its success.

“We sell out the Caf almost every year,” Schoeller said. “That’s just the best thing we can ask for!”

Schoeller also discussed the buzz among freshmen for the event, claiming PUTYCD is “all anyone is talking about.”

“I sold a ticket to a sophomore who said his biggest regret of his freshman year was not going to Psi U Think You Can Dance,” Schoeller said.

First-time attendee and Alpha Phi freshman Phoebe Mutlu weighed in, expressing how the competition was her “favorite philanthropy event yet.” Mutlu said she was surprised by everyone’s talent.

“It was cool that everyone really made an effort for the event and raised money for a good cause,” Mutlu said.

PUTYCD is unique in its ability to get both Greek and non-Greek students involved. Non-Greek organizations such as Dance in Flight and the Pepperdine Step Team were invited to perform.

Rachel Higgins, an unaffiliated junior, characterizes the event as a great opportunity for her to spend time with friends in and out of Greek life.

“I felt welcome at the event,” Higgins said. “I don’t usually attend Greek philanthropies, but this is one I make an effort to come to.”

The Psi Upsilon men set the stage by performing the first dance of the night. With every pop and lock, the crowd could feel their enthusiasm pulse through the room, Higgins said.

“PUTYCD is the closest thing to a good time you will ever find on campus,” said junior Connor Anthony, Psi Upsilon chapter historian and emcee of the event.

“It is an attempt to have a fun concert rather than demonstrate athletic feats,” Anthony said.

Both Anthony and Duvall attribute PUTYCD’s popularity on campus to its focus on entertaining attendees. Regardless of athletic ability or talent, students, faculty and alumni can enjoy the show.

“Everyone on and off stage is dancing — everyone’s having a good time,” Anthony said.