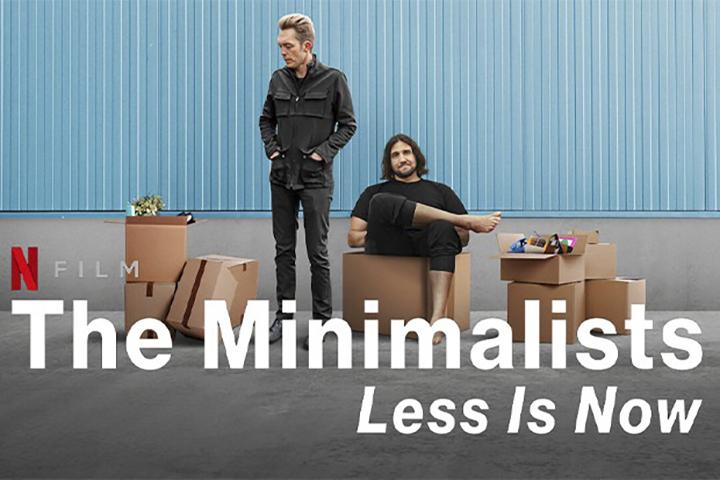 The poster of the Netflix original documentary, “The Minimalists: Less is Now,” launched Jan. 1, shows minimalists Joshua Fields Millburn and Ryan Nicodemus surrounded by storage boxes. Millburn and Nicodemus informed viewers of the current consumer culture and created a sense of urgency for a minimalistic lifestyle.

Minimalists Joshua Fields Millburn and Ryan Nicodemus, along with director Matt D’Avella, launched their second documentary, “The Minimalists: Less is Now,” on Jan. 1. Millburn and Nicodemus take their audience through the idea that happiness is a minimalistic lifestyle in their Netflix Original film.

Although the film focuses on building a minimalist movement, it does not capture the struggles that come with the initial steps in change and repetitively describes the issues of a modern-day lifestyle. Thus, it can be said that this documentary was weak in inspiration. Additionally, with a 53-minute runtime, the film is ironically long for a documentary about minimalism.

The documentary guides the audience through a series of Millburn and Nicodemus’ life events — from growing up in poverty with single parents to chasing the American dream. Once they were able to fill their lives with luxurious possessions, both Millburn and Nicodemus only found themselves unhappy and unsatisfied.

The feeling of unfulfillment from their lifestyle is further explained when Millburn and Nicodemus bring up disturbing facts about the dark side of consumerism. One of the important facts brought up is people living in a digital age are surrounded by daily targeted advertisements and online shops. This leads to creating strong temptations to make an online purchase or the need to conform to society by making purchases according to trends.

Interviews with former shopaholics or pack rats are shown throughout the film to give the audience real results of the success in living a minimalistic life. The interviewees explain their reason for living a minimalistic life and later list the positive results they have received. However, it is surprising to see those clips skip important details where the initial process of the emotional and physical change is not accounted for — thus creating a false idea that the journey to minimalism is as simple as it sounds.

Toward the end of the documentary, each minimalist describes their own principles as a method that one can use to begin their journey to minimalism.

Nicodemus mentions a packing party where he boxed up all of his belongings and took out the items needed in his daily routine. As a result, 80% of his things were still boxed up. Although these methods have proven to be successful for many, some may feel these methods may not work for a beginner who is processing detachment to sentimental items.

Although this documentary may be inspiring at first, some may feel the content of the film may have been unnecessarily long and imbalanced. Scenes where the current problem of consumerism and the historical context of the minimalists’ lives are shown can be considered repetitive and quite lengthy.

Resolutions are shown at the very end of the documentary, leaving a very limited time to address struggles when processing emotional detachment from personal objects such as pictures or cards from loved ones. Some may feel that the lack of depth in showcasing an intricate and considerate solution for beginners does not provide a strong reason for the change.

Regardless of the intention of the film to create a strong movement for change, the audience would be better off minimizing their time spent watching the film by reading a summary instead.

“The Minimalists: Less is Now” is available to stream exclusively on Netflix.