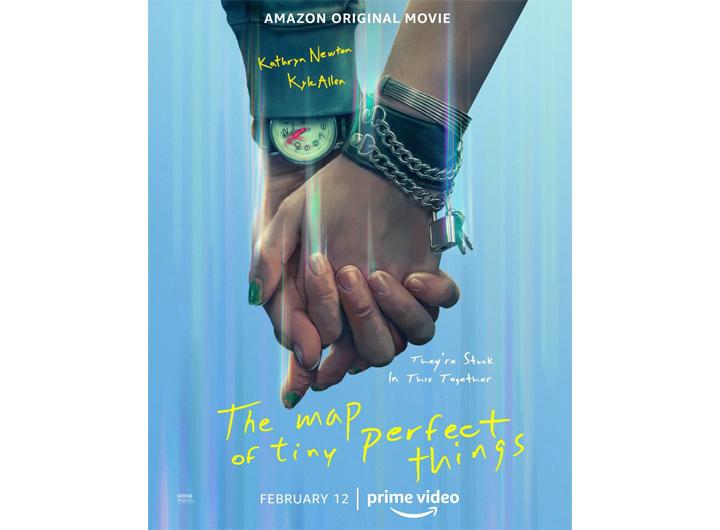 The poster of the Amazon original film, “The Map of Tiny Perfect Things,” shows Mark (Kyle Allen) and Margaret’s (Kathryn Newton) hands intertwined. Both Mark and Margaret knew they are in a time loop as their day repeats over and over again.

“The Map of Tiny Perfect Things” tells the story of a teenager, Mark (Kyle Allen), who lives the same day in a never-ending time loop. His world turns upside down when he meets a girl, Margaret (Kathryn Newton), who is also stuck in the loop. Their budding love story emerges as the two struggle to figure out whether to escape their endless day.

The idea of a time loop is popular in Hollywood films, from “Groundhog Day” to “Edge of Tomorrow” and “Palm Springs.” “The Map of Tiny Perfect Things” uses the trope to explore the true meaning of life. Mark and Margaret understand the existence of both struggles and bright moments in life and try to live with happiness and optimism.

Amazon Studios adapted the original sci-fi fantasy film from a short story with the same name by Lev Grossman. “The Map of Tiny Perfect Things,” directed by Ian Samuels, will be available for streaming on Amazon Prime Video starting Feb. 12.

The teenage rom-com discusses the true meaning of life, which adds an emotional level to the film, which resonates with viewers. “The Map of Tiny Perfect Things” gives the audience a sense of hope through the main characters’ selfless actions and their journey toward love.

Allen, the star of “American Horror Story” and “The Path,” plays the male protagonist, Mark, who loves video games, playing the horn in the school orchestra and drawing. Mark draws a map with the perfect, meaningful moments he witnesses, such as when he danced with an elderly woman to make her feel young again.

Just like many of his peers, Mark has an uncertain future about college. After he meets Margaret, Mark asks Margaret if she is experiencing any kind of abnormal disturbance.

Margaret faces a painful situation, which motivates her to explore the time loop — her mother has been diagnosed with cancer.

The time loop is a way for Mark and Margaret to escape from their daily struggles. Similarly, teenagers want to escape from the real world by spending more time on TikTok or other social networks and hardly talk to their parents. When Mark’s father tries to speak to him, they look like strangers sitting on a couch.

While the use of time loops or teenage love interests in coming-of-age movies are not new, this movie uses these tools in a unique way — it focuses on giving viewers hope.

Both Mark and Margaret exemplify a kindheartedness that many modern teenagers do not have. They stop a ball from hitting a bystander, give a lottery ticket to a stranger and spend time with Margaret’s mother during her last moments.

The audience resonates with the teenagers’ daily life in simple ways like drawing or playing video games. Mark does not want to escape from the time loop because he would rather experience the pleasant moments repetitiously and start a romantic relationship with Margaret.

Teenage love is hazy and curious and Mark and Margaret’s relationship exemplifies the experience of falling in love for the first time.

If you want to take a short break from class or find something romantic and meaningful to watch on Valentine’s Day, “The Map of Tiny Perfect Things” will be available for streaming Feb. 12 on Amazon Prime Video.