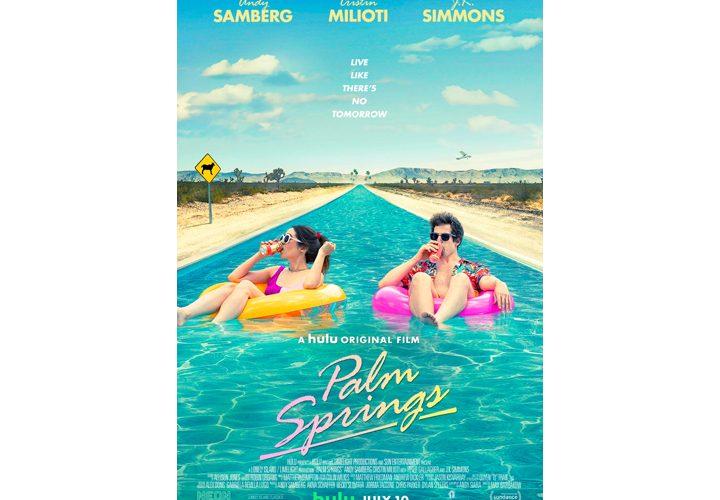 The “Palm Springs” movie poster features Nyles and Sarah lying in the pool. “Palm Springs” received a nomination for the Grand Jury Prize of the Sundance Film Festival in 2020.

“Palm Springs” is a rom-com directed by Max Barbakow that premiered at the Sundance Film Festival in January. The audience was excited to see Andy Samberg‘s performance, and the film broke a record for the most views after it was released July 10 on Hulu. This movie, however, still has room to improve, and the humor is lackluster.

In “Palm Springs,” Nyles (Andy Samberg) and Sarah (Cristin Milioti) meet at Sarah’s sister’s (Camila Mendes) wedding. On the night of the wedding, they accidentally bump into a cave’s entrance, and their lives change.

After entering the cave, some parts of people’s lives will repeat; for example, one may relive the previous day or a day in the future. The cave works as a time loop, like a time machine or an astrophysics black hole.

This is not the first time that the concept of a loop has appeared in a movie. “Groundhog Day” and “Click” also used this idea and did a better job; viewers can easily understand the plot of these two films.

The lead actor of “Groundhog Day” eventually captures the lead actress’ heart by using his newfound knowledge to help others. In “Click,” the main character fast-forwards through unpleasant parts of his life by clicking a magic remote control.

Unlike “Click,” the two main characters of “Palm Springs” are not a couple at first; after Nyles and Sarah get to know each other, they gradually fall in love without realizing it. The loop does not repeat a particular day before the film ends like in “Groundhog Day.” 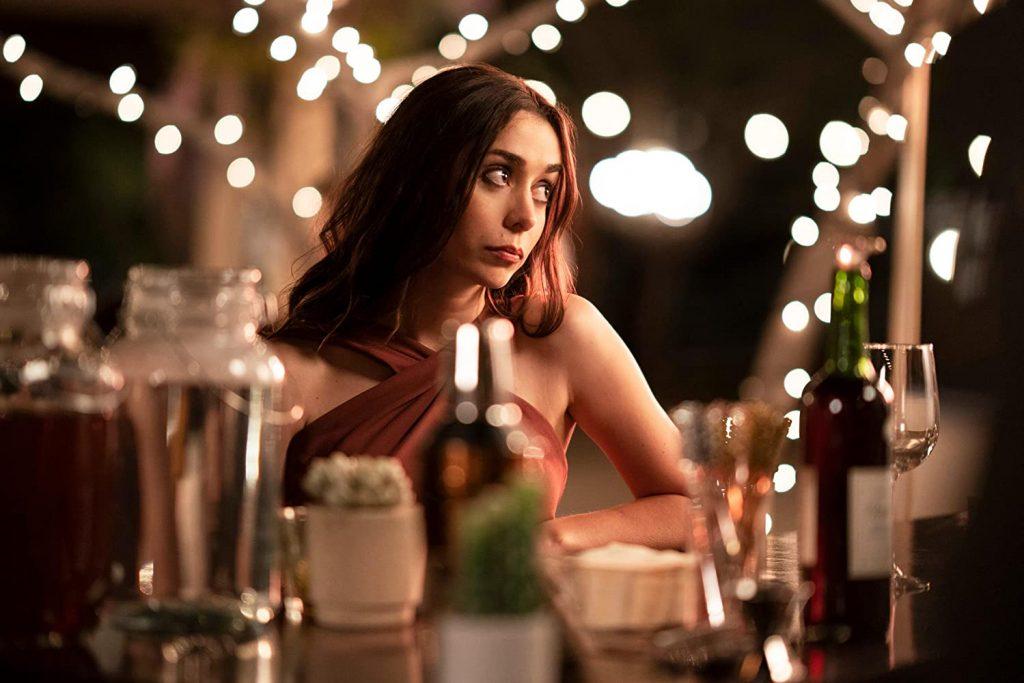 Sarah stares at the newly married couple, frightened to give a speech. Nyles saved the night by speaking in Sarah's place.

Where the story lacks creativity, the characters lack chemistry. Samberg and MilioIti fail to portray a spark between their two characters, which makes their love story unconvincing. It is hard to believe they fall in love in the end.

Samberg is known for his performances in “Saturday Night Live” and “Brooklyn Nine-Nine,” award-winning comedic TV shows with high audience approval ratings. “Palm Springs,” however, is not successful in making the audience laugh but instead confuses the audience with the loop concept, which makes the story repetitive. 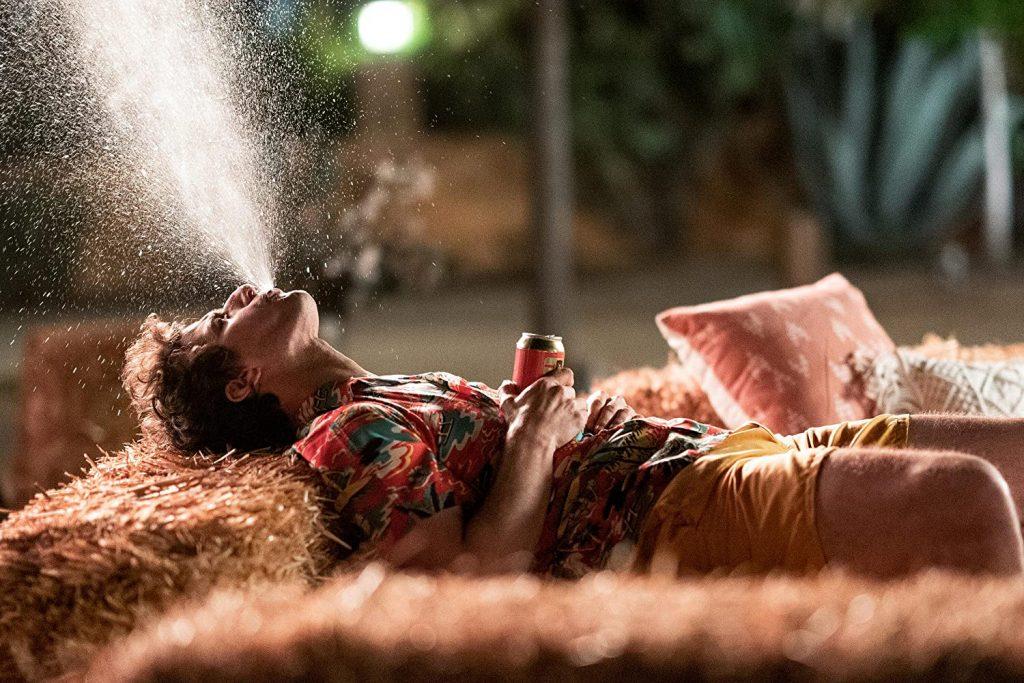 Nyles lies on a stack of hay at the entrance of the cave. His character underwent a massive transformation after entering the loop, and he laid down, enjoying his soda and pretending nothing had happened to him.

There are still, however, some reasons to watch “Palm Springs.” As the film takes place in the summer, the setting gives the audience a sense of relaxation. Viewers can imagine they are lying care-free in a swimming pool rather than staring at a small screen at home. 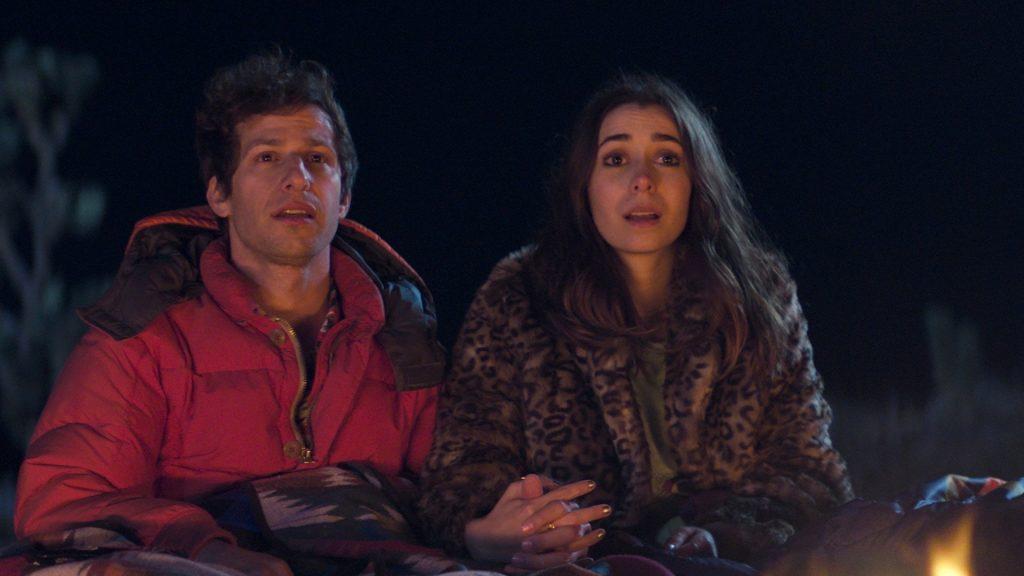 Nyles and Sarah sit at the entrance of the cave. They were curious about what would happen if they entered the loop again.

Fortunately, Academy Award-winning actor J.K. Simmons saves the acting in the movie. His character, Roy, contributes to most of the funny moments in “Palm Springs.” For his fans, watching Simmons play a humorous role is surprising.

Clearly, Samberg is a talented actor, and “Palm Springs” proves he tries hard to captivate the audience. Samberg, however, needs a better screenplay for his next performance. This film is suitable for killing time, but it does not leave the audience laughing out loud.

For people eager to watch a rom-com, “Palm Springs” is now available for streaming on Hulu. 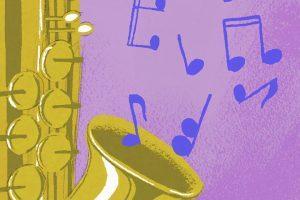