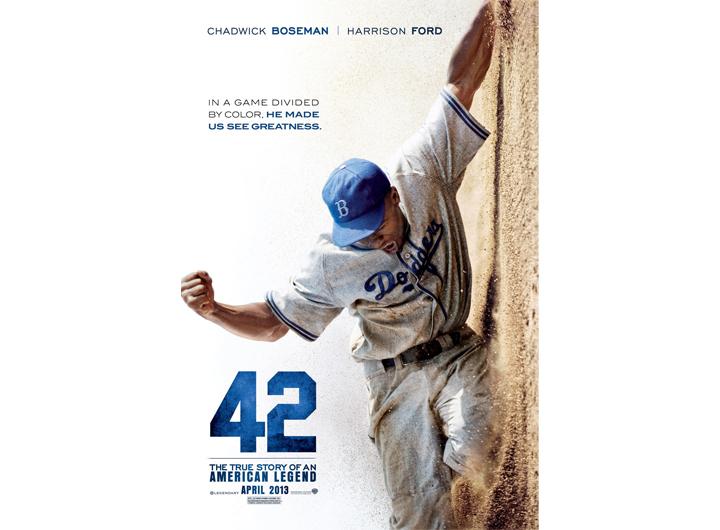 The film “42” is a historical biographic drama about baseball legend Jackie Robinson (Chadwick Boseman) who played in Major League Baseball. The film, released in 2013, broke the record for the highest ticket sales on an opening weekend of a baseball movie, according to IMDb.

Only 7.8% of athletes, or 80 players, in the MLB were Black in 2020, according to USA Today. There were only three Black players in the MLB before Robinson, according to The Washington Post. Branch Rickey (Harrison Ford), the owner of the Brooklyn Dodgers, wanted to challenge that, so he signed Robinson in 1947.

The film “42” delivers the message that people should stand up for and support each other regardless of race or social class.

Rickey tells Walker that if he cannot stand playing with Robinson, he can leave the team. Rickey trades Walker to their rival team, the Philadelphia Phillies. Walker then realizes he should not have created the petition because he wants to stay with the Dodgers.

More people in the Black community start to watch Robinson train and pick up baseballs for him. Robinson, as he inspires more people to come to the field and watch him practice, opens up opportunities for Black athletes to play sports and pursue professional careers.

Ford gives an outstanding performance that depicts a businessman with a caring heart. Rickey is also a legend and mentor to Robinson. When Philadelphia’s coach Ben Chapman (Alan Tudyk) insults Robinson on the field, Rickey shows his support for Robinson.

Robinson’s legacy is an example of how and why people should treat each other equally. With the support of his teammates, his coach and Rickey, Robinson’s confidence grows. He felt like he is no different from others.

The MLB players eventually accept Robinson and his story inspires generation after generation across different sports. No matter the background, all people should accept each other.

The film “42” shows how people with different backgrounds can work together and even be friends. Robinson inspired other Black athletes to join the MLB, such as the right-handed hitter from Kansas City Athletics and New York Mets, Ed Charles. Later in 1973, the Robinson family started a foundation called “The Jackie Robinson Foundation” to support minority students to go to college.

For Jackie Robinson Day, take time to honor this legendary player by watching “42.” The film is available for streaming on Amazon, Apple TV +, Fandango and VUDU.