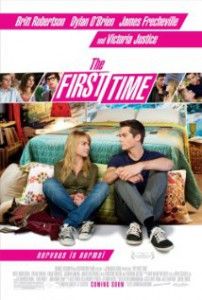 Everyone remembers their first time. Or, if they haven’t had their first time, they have probably imagined what it will be like. Fortunately for them, there is a movie that both remembers and guides the experience, step-by-step, through the trials and tribulations of the “first(s)” that every person must experience.

The First Time, directed by Jon Kasdan, is a simple story that approaches a very complex topic. Whether it’s the first time falling in love or the first time having sex it’s never easy, especially when the two seem to collide right in the middle of a seemingly straight and easy path.

Through the course of one weekend, Dave (Dylan O’Brien) and Aubrey (Britt Robertson) illustrate how invigorating—and difficult—it is to be a teenager, showcasing everything from the awkward first meeting of a future couple to the even more awkward and extremely anticlimactic “first time” and all of the excitement in between.

Painfully corny at times and nostalgically heartwarming at others, The First Time is memorable partly for it’s originality and partly for it’s willingness to approach a subject that everyone must experience but never wants to publicly talk about. This movie went there and it’s only rated PG-13. Not bad for a movie that is inherently about sex.

Even if audience can’t fully appreciate the sappy love story and its relation to sexual decisions through the eyes of two inexperienced teenagers, the two lead actors can, specifically noting Kasdan’s successful direction of potentially cliché characters.

“There was something about Jon’s vision that got me excited,” Robertson said in an interview. “It was something I was passionate about from the beginning…Jon brought so many layers to Aubrey and such a strong [directorial] performance on his part.”

O’Brien specifically appreciated both the realness and the originality of the film that he believes is in the majority of teen films today.

“I really liked how the script was sweet and down to earth and something that I could read through, connect with and understand entirely because it’s something everyone goes through,” O’Brien said. “I loved how smart it was and I think that intelligent teen movies have for some reason become uncool….Jon makes his characters so interesting and real and that’s a difficult thing to do.”

The First Time is not necessarily a must-see movie for all audiences. Men, consider this the ultimate chick-flick. But regardless of cinematic preference, this film does have something to offer for almost any viewer. Whether it be a reflective thirty-something, an engaged teenager, or a curious parent, no one will leave the theater without remembering their first time.

Living Abroad (Oktoberfest): And then it was noon...

Living Abroad (Oktoberfest): And then it was noon...