The murder of Michael Brown in the municipality of Ferguson, Mo., has brought to light what has been clear as day to those closest to the problem: The systematic abuse by police toward minorities — black persons specifically — remains engrossed in our national character.

Michael Brown’s murder adds to the stark picture of an unequal America in which young black men and women are targeted by those in authority. And, while it is yet to be seen if suburban police officer Darren Wilson will be charged with enough racial prejudice for murder, the uproar from the black community is clearly indicative of a common internal understanding that once again harm has been unjustly inflicted upon them.

Wilson, a white police officer, shot the 18-year-old on Aug. 9 at least six times — twice in the head, according to PBS. Brown was unarmed.

The Guardian highlights the fact that police protocol bars officers from firing at suspects who are, “an unarmed, non-violent suspect in flight who does not pose a serious risk to public safety.”

Starting Aug. 10, according to the Washington Journal’s notes, protestors flocked around the police department chanting, “Don’t shoot.” The protest ended peacefully, but looting ensued that night.

More than 300 police officers from the greater St. Louis area responded to reports of arson and gunfire, which lead to 32 arrests and two injured police officers by early Monday morning, according to USA Today.

With the onset of riots throughout the area, SWAT units, military-style equipment, armored trucks and tear gas were deployed, further escalating the situation.

Subsequently, the nation watched and read in disgust how the city police were dispersing peaceful protests, arresting journalists, including the Washington Post’s Wesley Lowery and pointing lethal weapons at citizens.

This led President Barack Obama to issue statements calling for respect from both sides and even garnered the attention of Amnesty International, which, for the first time, sent out U.S.-based human rights teams to monitor Ferguson police-civilian interaction.

It was not until Aug. 14 that the violence lessened, according to the New York Times, when Missouri Governor Jay Nixon transferred security operations to the state’s highway patrol, in order to quell fears that his militaristic approach to Ferguson violated right of protest.

Attorney General Eric Holder arrived Aug. 18 to pacify voices in the community while the Grand Jury reviewed evidence. A trial date has not been set, and it is important to note that there still remain many questions surrounding the evening of the Brown-Wilson interaction.

The Department of Justice and the FBI are independently investigating the case. However, it will be some time before all the facts are fleshed out before a jury. Dorian Johnson, a 22-year-old friend of Brown who witnessed the event, according to CBS, will be invaluable in understanding this tragedy.

Right now, the rumors abound. The tragedy has especially cut at the heart of what it means to be American.

Following the high-profile case of Trayvon Martin, a 17-year-old killed by George Zimmerman, it is simply too difficult to stomach the possibility that the incident in Ferguson is race-related and that, once again, a young black man has been taken from his loved ones.

I don’t know why Wilson shot Michael Brown six times, but the reality is that this is not an isolated event. The African-American community has historically and continues to bear the brunt of an institutionalized oppression.

The NAACP compiled a fact sheet highlighting the harmful policies. In the document, the disparities are evident in the United State’s drug war, prison and educational policies.

According to a criminal justice report gathered by the NAACP this year, African-Americans are sent to prison for drug offenses at 10 times the rate of whites even though whites are five times more likely to be users.

Moreover, blacks spend almost the same amount of time in prison for drug-related crimes as do whites for violent offenses according to the NAACP.

Blacks make up less than one quarter of the U.S. population. Still, one million of the 2.3 million incarcerated in the U.S. are black, according to the Center for American Progress. “Unlocking America,” a 2007 report conducted by the Center on Media, Crime and Justice, estimates that if minorities were to be imprisoned at the same rate as whites, our incarcerated population would fall by 50 percent.

According to the Bureau of Justice, this trend predicts that one in six black males born today will likely spend part of their life in prison. Even at the schoolyard, such grotesque discriminatory practices are pronounced, with black children from grades 7 through 12 being suspended or expelled more than any other group as noted by the U.S. Department of Education.

In this nation, there exists institutionalized oppression against blacks, evidenced in all the disparate facts compiled by the NAACP. However, none of this comes as a shock to those closest to the problem — those within the Ferguson community; those like Michael Sr. and Lesley McSpadden who have had their child taken much too soon.

Whether or not a trial indicts Wilson as a racially incentivized murderer who used his badge to bring unspeakable harm to those he was entrusted to serve, the truth remains that the larger community of blacks was wronged — because again, it was their community that was handed tragedy. 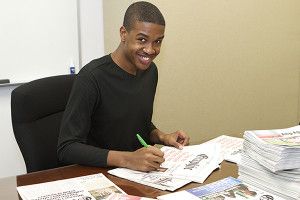 Editor’s Note: Each week, The Joshua Gray “GRAYDE” column will present a collection of opinions based on Gray’s...
Copyright 2018 Pepperdine Graphic
Back to top