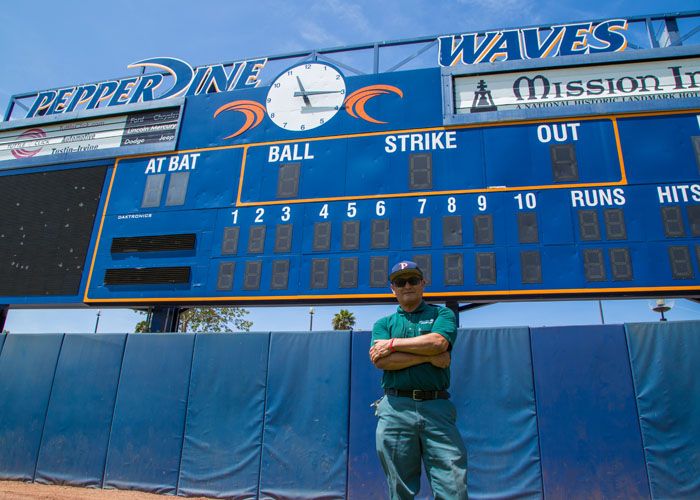 Tears of pure joy welled up in the eyes of freshman George Alamillo and his father, Ignacio Alamillo, after George broke the news of his acceptance into Pepperdine last year.

“Once I read that I got accepted, it was one big moment. I came home, told my parents, that’s when it really hit us,” George said.

Although George is 19 years old, it took 34 years of work to reach this point, starting with Ignacio leaving his small hometown of Zacatecas, Mexico, to come to Los Angeles, California, in 1980.

Ignacio attended night classes at Evans Adult Community School while doing various odd jobs during the daytime in his teens. Then, his uncle, a former Pepperdine employee, informed him of landscape worker openings at Pepperdine. At the age of 19, Ignacio began tending to the Malibu campus.

He received his green card once Ronald Reagan signed the 1986 immigration reform act, granting amnesty to certain people who entered the country before 1982.

After six years of working at Pepperdine, he was promoted to lead landscaper. He has held the title for 22 years, responsible for leading six staffers to care for specified areas including the athletics fields, areas around the TAC and a portion of the freshmen dorms.

One of the main reasons Ignacio has remained at Pepperdine for such an extended period of time was the inkling of hope that one of his two children would enroll at the university. In 2006, Ignacio told the Graphic that it was his dream for his son, George, to attend Pepperdine.

When that “impossible” dream turned into a reality, Ignacio said he “couldn’t believe it.”

To put icing on the cake, George walked onto the baseball team. He survived the 14-man preseason tryouts on a familiar field.

Throughout George’s childhood, Ignacio would frequently drive his son out to Malibu for baseball camps and to watch games.

While looking out on the Waves competing at Eddy D. Field Stadium, George said, “I literally remember my dad telling me, ‘One day you’re going to play here.’ And I was just like, ‘OK, that’s going to be hard.’ But he was right.”

Ignacio zealously worked hard to make a living for the Alamillo family in America. George strives to follow his lead.

“Nothing I do right now can compare to what he has done for the past 20-plus years coming [to Pepperdine],” George said.

George said in eighth grade he suddenly gained a renewed focus to dedicate himself to maintaining high grades and improving his baseball skills. In his time at Marshall High School, he sprouted to 6-foot-3 and picked up a resume of accolades, including Co-League MVP as a freshman and All-City first team as a senior.

Pepperdine coaches took notice of George’s talent and gave him the opportunity to walk onto the team. He earned a spot as a right-handed pitcher through tryouts that narrowed a group of 48 down to 34.

His collegiate baseball career is currently on hold because of a right arm injury. He opted to redshirt this season, but he has high aspirations. When asked about professional baseball in the future, George smiled and said, “That’s what I want, that’s the plan … Coming to Pepperdine was a dream, but that’s a goal above that — the next one.”

With his son enrolled at Pepperdine, Ignacio said that now more than ever, everything he does is for the students. He says he loves his job and has a great sense of pride.

In response to his favorite part of his 28 years at Pepperdine so far, he said the people he meets make it worth staying – from the students to baseball players to coaches to managers.

“Everybody says you can find another job anywhere, you can go everywhere, but you’ll never find a place like Pepperdine,” Ignacio said. “And I think that’s true.”

The baseball team makes a point to thank Ignacio and his crew each season, and players can be seen chatting with the workers on the field. Ignacio said their appreciation feels good, since the majority of people rarely see the behind the scenes work that goes into caring for the field.

Now attending Seaver College at the same age as his father was when he started working for Pepperdine, George said he is beyond grateful for everything his dad has done for him. He is “just trying to give back to him … now it’s on me to do.”

Meanwhile, Ignacio will keep the fields green and as bright as the attitude that feeds his daily motivation: “I always think positive. I say thanks to God for a new day and to help me and my family.”