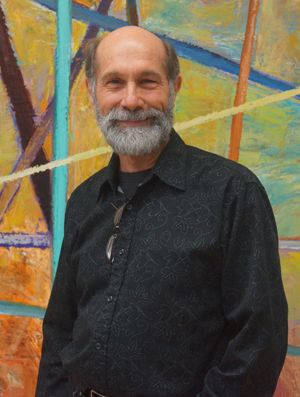 What would the world be like without artistic expression? “Drab!” exclaimed Fine Arts professor of 39 years, Avery Falkner.

“[Art] is a natural thing,” Falkner expressed. “In all cultures, you have people doing artistic things. In the most primitive and most sophisticated cultures, art is just a part of life.”

Originally from West Texas, Falkner earned his bachelor’s degree in art from Abilene Christian University. He then traveled to New York, where he furthered his studies and found a love for contemporary art.

Falkner did his graduate work at California College of the Arts, and then went back to his alma mater Abilene Christian and taught for four years, before coming to Pepperdine in 1973.

To say that Falkner is passionate about art would be an understatement. He lives art and finds enjoyment and fulfillment in creating.

“You’re an artist because you have to be,” Falkner said. “In a way it’s not a choice. In a way it’s something that has to be. Once you’re into it and caught up in the activity, it becomes so much a part of you that if you then couldn’t be whatever you did, even if you changed mediums, [you] would be artistic. I think it’s an ingrained disease.”

Initially, Falkner considered going into commercial art such as automotive design and airplanes, which he used to draw as a kid. He explained that in his youth, he was able to identify types of airplanes in the sky, by both sound and sight — the onset of his visual acuity.

But he decided to shift his focus when he discovered a fascination with modern art.

“As soon as I was exposed to the world of fine art, contemporary art in particular, I was amazed by that and attracted to that. I later became very serious about painting in undergraduate school.”

Falkner listed artist Richard Diebenkorn as a favorite painter, in addition to Picasso and other classical painters like Rembrandt and Leonardo Da Vinci.

“I like the way [Diebenkorn] works and leaves a recognizable history in his process,” Falkner said. “It is such an educational thing to see, because it demonstrates beginnings and changes and finally coming around to a conclusion. It really reveals the process.”

“Because, what is interesting about art is the process. That’s where the joy is and the struggle is and where the meaning comes.”

Both a passionate artist and father, Falkner explained that creative expression runs in his family. His children all have artistic jobs, but  with differing mediums.

“Art is not just in the visual sense,” he said.  “My chef daughter is creating art, not only in the way it tastes, but in the way it looks, and food is the medium. As well, my son Jason is a musician and my son Ryan is a storyboard artist.”

Not only does Falkner enjoy visual art, he also enjoys music, travel and film, foreign films in particular. He explained that he and his wife thoroughly enjoy learning about other cultures. In the future, they hope to travel to South America and New Zealand.

“It’s always a joy to go to another place in the world and experience a whole different culture. To see what people do, what their culture is like, what their art is like. [Art forms] are produced in every culture with their own imprint, their own stamp.”

For Falkner, art is like an exploration, an adventure to be undertaken. His passion is one that has allowed him, during his 39 years at Pepperdine, to combine his two loves.

“It’s the best of both worlds as an artist and a teacher to be an art professor. There’s the joy in being able to do your creative work, and then the joy that comes from the students.”

In addition, his profession has allowed him to exercise his passion, something that Falkner believes is essential to attaining fulfillment.

“Passion is necessary in the arts and necessary in life. I think it’s necessary that you’re passionate about something,” Falkner said. “Passion is to be excited, to be full of life and to fully engage in what you’re doing, and that’s when there’s fulfillment.”

After such a vast career in the art profession, what kind of legacy does Falkner want to leave for Pepperdine and his colleagues? His goal involves a plan to appreciate the world’s collective talents.

“Live life with love and joy. Through that appreciate and love your own abilities and utilize all the gifts that have been given to you as an individual. Also, appreciate those gifts in others and recognize the brotherhood and sisterhood of humanity to appreciate what others are doing.”

Senior Patrick Lenon  said he has been motivated by Falkner’s zeal for teaching.

“If there’s one thing I could say about Avery, it’s that he did a great job of making his students feel good about themselves and building confidence,” Lenon said. “When we turned in our paintings, he would comment on everyone’s work—about something that stood out to him, that he enjoyed. To have your professor comment about something meaningful and personal was a really great thing. [Through that] I developed a lot of confidence in my artwork.”

The price tag on Malibu real estate is already pretty steep, but it often pales in comparison to the value of those residing...
Copyright 2018 Pepperdine Graphic
Back to top