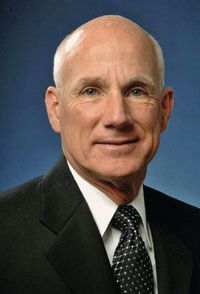 The Seaver Faculty voted this morning 1. to proceed with a vote on the two resolutions on Seaver Dean Rick Marrs proposed by the SFA Executive Committee, and 2. that that vote should proceed on a secure electronic website. The voting, now open, will close on midnight, Nov. 8.

The text of the resolutions appears on Survey Monkey with a password to permit voting. SFA President Cyndia Clegg sent the email to Seaver faculty today at 10:33 a.m.

Rick Marrs’ unexpected decision to forgo a new term as Seaver Dean  — effective at the end of the school year — has prompted a reactionary vote from the Seaver Faculty Association. In a meeting held yesterday, the SFA Executive Committee, which represents faculty on academic and professional matters, unanimously adopted two resolutions in support of Dean Marrs and asked for his reappointment.

Marrs, in his fifth year as Seaver Dean, announced on Labor Day to Provost Darryl Tippens and President Andrew K. Benton that he would not be seeking another five-year term. That decision was accepted by Tippens but would later cause a public and private reaction among staff and faculty as word got out, calling for Marrs to   reconsider. Tippens has said that Marrs’ reappointment as dean is no longer an option.

However, faculty hope to persuade the provost to reconsider based on the SFA’s resolutions.

Those resolutions were sent via email to all Seaver faculty by Dr. Michael Murrie, the former SFA president standing in for President Cyndia Clegg. The email presented both resolutions in preparation for a secure online vote in the next week.

The first motion officially recognized Marrs’ “excellent leadership” during his tenure and regretted that he not remain as dean.

The second motion asked that the provost and president suspend the search process for a new dean and evaluate Marrs for reappointment.

Marrs has not given reasons for his leave and said he does not plan to do so, only to cite professional matters rather than personal. On Oct. 8, a day before the campus was notified, Marrs met with the Seaver Cabinet (deans, chairpersons and others who report directly to him) for a monthly meeting. At the end of the meeting, Marrs announced his decision to step down from his post at the end of the academic year. He left the meeting soon after.

Until then, he admitted that virtually no one saw it coming.

“While his decision not to stand for another term caught me by surprise initially, I respect his thoughtful decision and look forward to finding ways to continue to work together in the future,” Benton wrote in an email Tuesday.

For the Seaver division chairs, the surprise quickly turned into disappointment. Most have said they still do not have a concrete explanation for the dean’s stepping down.

Though Marrs is in his last leg of a five-year term as dean, many faculty and staff assumed he would extend the position.

Marrs unsuccessfully tried to rescind his decision later in the month.

According to Tippens, Marrs had asked him whether he might continue a new term as dean. The provost said he had already accepted Marrs’ intention not to be renewed and would move forward in the search for a new dean.

When asked why he would not reconsider Marrs’ reappointment, Tippens said, “Because I agree with his original decision.”

Marrs neither confirmed nor denied that he tried to rescind his Labor Day email.

“I typically say what makes Seaver great are the students, faculty and staff, and if you get that working you’re in great shape. And that’s what I thought my job as dean was — to help get all the pieces together,” Marrs said.

When asked if he wants to continue that job: “If that were an option I’d be glad to consider it.”

It was Marrs’ understanding that his job as dean was no longer an option.

If Marrs initiated the decision not to renew, then Business Division Chair Dr. Jere Yates wonders why Tippens will not consider renegotiation.

Yates, the Business Division founder from 1973, discussed the practicality of going back on this public announcement. He underscored the recent example of the University of Virginia president who was reinstated after faculty protested the ouster.

Yates painted Marrs as a humble man, not one to create a fuss. Faculty regard Marrs, who came to Seaver in 1987 as an associate professor of religion, largely as a colleague. But Yates said he gets the sense that Marrs didn’t feel appreciated by high-level administrators for his efforts. Other chairs and senior faculty have wondered if Marrs and Tippens have clashed over issues such as the implementation of the master’s of fine arts in writing for screen and television and the Graziadio joint bachelor’s and MBA program.

“We’re humming, our students are great, our faculty has never been better. Rick [Marrs] has just developed this strategic vision. It’s extremely well thought out and written. Obviously he was planning to go ahead, and I think he just got beaten down,” Yates said.

“I want all of our deans to be advocates of their faculty and curriculum. I would say he was a proper and even good advocate for faculty. That is not at all an issue in that case,” Tippens said yesterday.

All eight chairpersons stand behind Marrs and have urged him to renew his position as dean.

“All the division leaders are supportive of Rick [Marrs], 100 percent behind Rick,” Yates said. “Each of us believes he’s helped us be stronger.”

Marrs’announcement also comes just weeks after Pepperdine’s accrediting body, WASC, completed its final visit to the campus. Marrs said the college waited until after the visit to announce his decision to avoid distraction from the school’s reviews and reports.

In WASC’s first visit to the campus in 2010, the visiting team found that some faculty reported “a lack of transparency in administrative decision-making, a sense that administration does not value faculty’s ability to contribute to governance and a lack of trust between the faculty and administration.”

The university had since responded and worked toward the recommendations for more shared governance and trust. But Yates said this is still a concern.

Although it is not clear to what retaliation Yates was referring, some chairs and senior faculty members have recommended that staff and non-tenured faculty stay quiet on the subject of Marrs and even the administration itself during this time. In response to this suggestion, Marrs said that people probably have more anxiety than they should, but he does understand why they would have it.

Contacted by the Graphic in the past two weeks, one division chair declined to comment while others chose to speak off the record.

In an email Tuesday night, Provost Tippens wrote that he does not foresee many  changes at Seaver following Dean Marrs’ exit.

Marrs plans to produce a final version of Seaver’s Strategic Plan by the spring for the community to review and approve.

“Given where we think the momentum and trajectory of where Seaver is right now, it was definitely surprising,” said Dr. Michael Ditmore, who began as Humanities and Teacher Education chair in August. Ditmore has known Marrs for more than 20 years and said one of the things that attracted him to the chair position was the expectation that Marrs would remain as dean at least until he adjusted to the position.

“He’s been someone I’ve gone to in confidence when I’ve had faculty issues. I’ve  really relied on his wisdom and expertise. For me it’s a real challenge,” Ditmore said. “I feel very uncertain what my future will look like in terms of  relationship to another dean.”

Seven faculty and administrators, chaired by the provost, oversee the search process. Then a national search begins for the new dean, who must be “prepared to preserve and enhance” the Church of Christ affiliation, writes the Office of the Provost website. The search will continue through the school year and conclude with an appointment in the spring or early summer. The administration expects to announce the members of the search committee in the next week.

Beauty in the 'BU: Afternoon of Elgance Fashion Show