Fab flicks to see this season 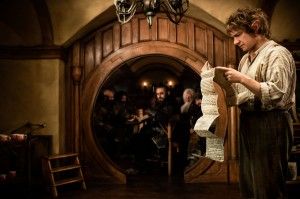 December brings with it three pivotal moments: the end of the semester, holiday celebrations and a swarm of blockbuster hits that have been buzzing for the past 11 months. Thrillers, love stories and comedies are all being released this holiday season. Even though these past few weeks are filled with term papers, presentations and finals, be sure to keep in mind these highly anticipated films.

Based on the prequel to J.R.R. Tolkien’s famous trilogy “The Lord of the Rings,” “The Hobbit: An Unexpected Journey” is the first of a trilogy of films directed by Academy Award-winning filmmaker Peter Jackson, who was also the mastermind behind the adaptation of the first Tolkien trilogy. The narrative of “The Hobbit” is set 60 years before “The Lord of the Rings” and follows the character Bilbo Baggins, who begins a quest to reclaim the Dwarf Kingdom of Erebor.  The first leg in this epic will be released Dec. 14. The release of the second film, “The Hobbit: The Desolation of Smaug” is projected to be released Dec. 13, 2013 and the film “The Hobbit: There and Back Again” is projected for July 18, 2014.

The musical phenomenon is coming to the big screen! “Les Miserables” has been seen on the stage by more than 60 million people in 42 countries and 21 languages. The film will feature Academy Award winner Russell Crowe, Hugh Jackman, Anne Hathaway and Amanda Seyfried. The story follows the “survival of the human spirit” with several characters in 19th-century France. Be sure to catch the longest running musical as it hits theaters on Christmas Day.

Out Dec. 7, “Playing for Keeps” is one of this season’s many romantic comedies that is sure to have audiences running to the theaters. Starring Gerard Butler, Jessica Biel, Uma Thurman, Catherine Zeta-Jones and Dennis Quaid, this film is about a former soccer star who goes back home to piece his life back together, including building a relationship with his son. Directed by Gabriele Muccino, this film is bound to get audiences from all walks of life.

From director Anne Fletcher comes a comedy with a sweet undertone. After feeling sorry for his lonely mother (Barbra Steisand), an inventor (Seth Rogen) invites her on his cross-country road trip. The pair endures hitchhikers, odd motels and each other as they embark on this eight-day journey. The film opens Dec. 19.

Starring Tom Cruise, Rosamund Pike, Michael Raymond-James and Robert Duvall, this thriller is set in an innocent city where five people are shot dead by a sniper. However, not all is what it seems to be in this film, especially when Jack Reacher (Cruise) comes into the picture. Be sure to check out this film, set to debut Dec. 21.

Directed by Judd Apatow, “This is 40” follows the characters of Pete (Paul Rudd) and Debbie (Leslie Mann) from the blockbuster hit “Knocked Up.” This time around, the audience will get a closer look at this couple and how they are dealing with their lives. Don’t miss this comedy when it hits theaters this Christmas.

Academy Award nominated director Andrew Adamson and filmmaker James Cameron have created the 3D adventure, “Cirque du Soleil: World’s Away.” The story follows two young people as they journey through the dreamlike worlds of Cirque du Soleil in order to find each other. This worldwide sensation comes to theaters Dec. 21.

Matt Damon, Rosemarie DeWitt and Frances McDormand star in this drama set to be released Jan. 4. The story follows Steve Butler (Damon) a natural gas company salesman who moves with his sales partner Sue Thomason (McDormand) to a small town where his company wants to use the resources. While his job seems easy at first, Steve soon experiences life-changing events that complicate things.

While the print Graphic will be on a hiatus, be sure to check out graphic-pepperdine.com for various movie reviews and info on upcoming films.

Dr. Richard Gathro is the new Director of Pepperdine's Washington DC Program, the university announced today. Gathro has a doctorate...
Copyright 2018 Pepperdine Graphic
Back to top