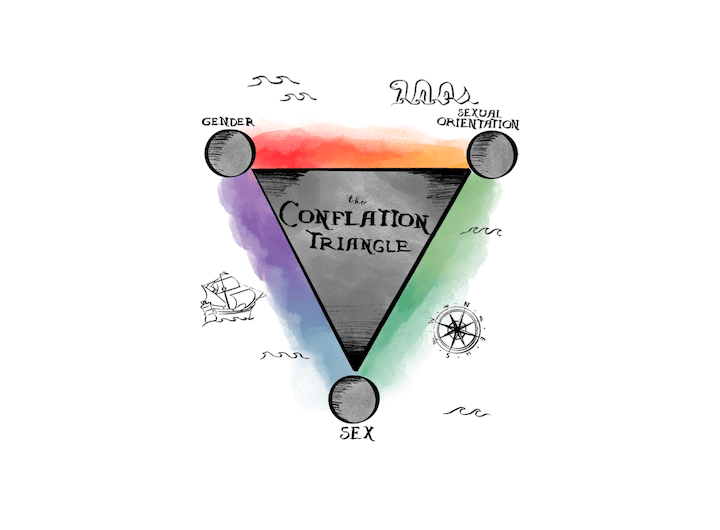 When an individual meets someone, they may notice the person’s style of dress and name, which will likely carry connotations as either masculine or feminine.

Why is one led to such assumptions?

It’s a phenomenon called the conflation triangle, according to University of Miami Professor of Law Francisco Valdes.

Valdes presents his theory that a combination of androcentrism (masculine point of view) and heterosexism leads to the conflation of sex, gender and sexual orientation in the Euro-American sex and gender system, according to his 1996 Yale Journal of Law & the Humanities article.

At the base of the conflation triangle is sex, where according to Valdes, “conflationary arrangements begin.”

From there, the conflation of “external genitalia (sex) [and] social personality (gender)” are legally and culturally enforced, Valdes wrote.

People with certain genitalia are expected to exhibit a certain personality or behavior, and they are punished or pressured if they do not.

“We have a lot of norms that still discipline people pretty heavily for acting outside of those [gender] boundaries,” said Sarah Stone Watt, divisional dean of the Communication Division. “We still socialize boys and girls to really fear acting outside of those norms. Girls tend to have a little bit more flexibility — the idea of being a tomboy is not as devalued as for boys the idea of being a sissy.”

The social personality of a person, or their perceived gender, also leads one to assume their sexual personality, or perceived sexual orientation. This is the upper leg of the triangle.

This is the influence of heterosexism and heteronormativity (the assumption that heterosexuality is the normal sexual orientation) on the triangle.

Legal Enforcement of the Triangle Varies

The legal enforcement of the triangle varies, as interpretations of the law are dynamic.

Since the law was written for sex, some people have not had standing in discrimination cases if they argue on the basis of gender or sexual orientation, Stone Watt said.

“If they were not being discriminated against on the basis of being male or female, that created complications,” Stone Watt said.

For example, Title VII of the Civil Rights Act of 1964 is a federal law that prohibits employers from discriminating against employees on the basis of sex and four other factors, but not gender or sexual orientation.

Sometimes sex and gender are conflated in the law, which allows people protection from discrimination on the basis of sex.

In Price Waterhouse v. Hopkins, the plaintiff, Ann Hopkins, claimed that the firm denied her partnership because she did not look and act feminine. Hopkins won the case on the basis of sex discrimination outlined in Title VII.

“The word ‘gender’ has come to be used synonymously with the word ‘sex’ in the law of discrimination,” University of Chicago Professor of Law Mary Ann Case wrote in a 1995 Yale Law Journal article.

Nonetheless, the law may protect on the basis of gender but not extend the same protection to sexual orientation.

“When individuals diverge from the gender expectations for their sex — when a woman displays masculine characteristics or a man feminine ones — discrimination against her is now treated as sex discrimination while his behavior is generally viewed as a marker for homosexual orientation and may not receive protection from discrimination,” Case wrote.

Stone Watt agreed that the existing precedent is contradictory.

“There have been some cases in which courts have sided with conflation — so have read sexual orientation — and allow for sexual orientation discrimination cases to be brought under laws that are written for sex, and there are cases where they haven’t,” she said.

Social Enforcement of the Triangle Remains

This power system, which Valdes calls “compulsory heteropatriarchy,” is based in bifurcation of personhood into two sex identities, polarization of these two sexes into separate genders, the “penalization of gender atypicality” and devaluation of the feminine gender, Valdes wrote.

He extended this to say that “ideology, identity and destiny” are controlled by the conflation and assumptions made about a person.

These assumptions begin at a young age, Stone Watt said.

“We do that too with children who often aren’t even at a developmental stage where they would be sexually attracted to someone,” she said. “But we speculate about who they will be attracted to later in life based on how they behave, even when they’re really young.”

Sex, gender and sexual orientation are often viewed as the same, though each is a small and distinct part of a person’s identity.

“The thing that the triangle really reveals is the way that we tend to make assumptions about people based on very small amounts of information, and the ways that those associations are naturalized,” Stone Watt said.

How to Make Progress at Pepperdine and Beyond

Any time there are movements in favor of cultural change, there are often opposing movements against the change, known as repression.

“Just as much as we may be seeing these debates play out in bigger ways in today’s culture than we might remember in the past, we’re also seeing hard pushes against them,” Stone Watt said.

Though there is no definite evidence for the breaking down of the triangle, cultural values have at least begun to allow for the possibility of progress.

“It’s difficult to quantify progress necessarily, but at the same time, socially, we can see that people are performing a broader scope of gender, and in the media, we’re seeing a little bit more flexibility,” Stone Watt said. “[T]here is more space for the conversation to occur.”

Christian and other religious roots may influence students’ and faculty members’ worldview on this issue.

“We all come, whether we identify as Christian or not, with assumptions about what the religious affiliation dictates with regard to these kinds of topics,” Stone Watt said. “For some, that’s only about sexual orientation. For others, that’s very focused on just sex and gender.”

To assuage these assumptions, conversation must be made about what people believe and whether these beliefs are based in their upbringing.