Exchange laughs and stories at the MLE 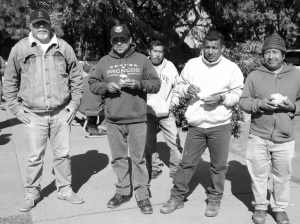 Monica Case / Staff Photographer
A PLACE TO FEEL WELCOME­­ — While the Malibu Labor Exchange facilitates work contracts, it also serves as a welcoming place for community. The Labor Exchange is located on 23595 Cross Creek Road in Malibu.

By 6:36 a.m. on Friday morning, the sun had not yet risen. Instead, the dark sky pressed into the Malibu County Courthouse parking lot, clouds bulging with rain. Already, six work-seekers milled about the pavement, clenching their arms to their chests to stay warm.

“Do you mind if I smoke?” 47-year-old Luis Cuellar asked. He arrives at the Labor Exchange Monday through Saturday by 6:30 a.m., opening time. The Malibu Community Labor Exchange is a local gathering spot for people seeking employment.

“I’m an early bird — as they say, the early bird gets the worm!” Cuellar said. “If I had a garden I’d be in the garden right now.” He laughed, sipping coffee from a Styrofoam cup.

Every day, people like Cuellar come with picture ID, register and jot their names and daily number onto a tiny slip of paper and plop the slip into one of two jars — a jar swaddled in red tape and all-caps handwriting that reads “women mujeres,” or a blue-taped jar labeled “men hombres.” Malibu residents then come, draw a name — and a dream — from the jars and settle a contract with their new work partner for the day.

“This is a place of many characters,” Center Director Oscar Mondragon said. He leaned into his desk, his brown pilot’s jacket pressing into the wood. “People can come try to find work, help their family, help themselves, find a decent job, an honest job and find money. It’s a place where they can feel welcome; they aren’t going to get judged for who they are.”

Cuellar arrived in Malibu three weeks ago to look for money and job opportunities. Before that, he lived and worked in Idaho building locomotives. He lost his position, and he now earns a living doing odd jobs for local residents who hire him at the Labor Exchange. On average, he receives work two days a week.

“Yesterday, I was in the dumpster picking out oak wood for a guy who was building a table,” Cuellar said. “That one [was my strangest job yet]. I’ll be here until I find something permanent.”

Another seeking permanence is Kay Beeman, certified massage therapist. Currently car-less and homeless, she said she comes to the Labor Exchange for one reason only.

“I need money,” Beeman said. “Period. End of story. However it comes to me.”

The only woman at the Labor Exchange so early in the morning, Beeman sported a sky blue scarf the same color as her eyes and a black cap pulled low on her forehead.

“It’s not just all backbone people; here are people who can read, write and edit things,” she said. “I went to college; I’m just broke. People here are all the way on the bottom, truth be told. Some of us are just straight poor.”

Nearly 15,000 people like Cuellar and Beeman have passed through here since the Labor Exchange opened on Aug. 31, 1993, as a community-based, nonprofit charity, Mondragon said. Malibu residents support the Labor Exchange through donations, hiring employees and teaching English lessons to the workers who only speak Spanish.

“You can come to Malibu and see it has an aura of rich town and snobby people, people who care about big houses and surfing,” Mondragon said. “There is that, but there’s more to it than that. There’s lots of caring people. This place exists because people care.”

A car full of Webster Elementary school kids pulled up.

“These are people you should meet,” Mondragon said.

Three mothers, hugging packages of granola bars, Sara Lee bread and Smucker’s strawberry jelly, spilled from the car and began arranging their spread on the wooden table outside the Labor Exchange. Soon the wood was covered with apples, Cutie oranges, Skippy peanut butter and little round bottles of apple juice.

“This is what makes this place alive,” Mondragon said as the kids began to pass out bananas.

On the fourth Friday of every month, Malibu resident and mother of a 10-year-old Webster student Sky Kunerth brings breakfast and children to the Labor Exchange. She has been coming for the past three years.

“She’s my angel,” Mondragon said, giving her a hug.

“It’s good for people to see that [the workers] are human beings,” Mondragon said. “We also have a dream. People desire to do something better. Unfortunately, they can’t afford to go to school but have to go to work every day to do it. It’s a different approach.”

According to Kunerth, a member of the PTA at Webster elementary, the school wanted to take its students to a deeper level by exposing them to different aspects of Malibu, and to service.

“I found this little niche — these are people who are a part of the community. I love being a part of that,” Kunerth said. “I think that every human’s mission is to help one another. If you build [that mission] from within and teach it to your children, they will hopefully model your behavior and become gracious adults.”

Pepperdine students come Saturday mornings to the Labor Exchange to teach English lessons through a Volunteer Center program called Language Connection. The 9:30 to 10:45 time slot is open to anyone interested in sharing his or her abilities with the workers here.

“People we get here come from so many parts of the world,” Mondragon said. “Students do mostly academia or partying on the weekends with friends, but doing something different gives you a new perspective, something beyond your everyday life.”

“I think the most important lesson I’ve learned is not to forget our neighbors,” Smith wrote in an email. “As Pepperdine students, we commit ourselves to serving others. A lot of the service projects students go on require flying halfway across the globe and I feel that sometimes we forget that there are people in our own backyard who are in need of help.”

When asked what Pepperdine students should know about the Labor Exchange, Kunerth responded with a smile.

“That it exists — and there are amazing workers who can do so much more than clean up leaves and pick fruit,” Kunerth said. “It’s a lovely place.”

The annoyance started on my first day back from winter break. On my journey back to Malibu from Shanghai, I suffered...
Copyright 2013 Jupiter Premium Magazine Theme
Back to top