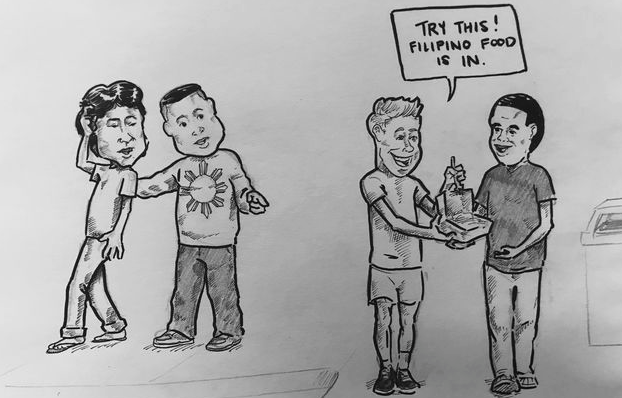 In case you missed it, Filipino food is going to be the next big food trend. At least according to the headlines of countless magazine articles.

“I predict, two years from now, Filipino food will be what we will have been talking about for six months … I think that’s going to be the next big thing,” said Andrew Zimmern, host of the Travel Channel’s “Bizzare Foods,” in a 2012 interview with Today.com.

More recently, Anthony Bourdain called Filipino food “ascendant,” “underrated,” and “a work in progress,” according to Regine Cabato’s article “Anthony Bourdain: Sisig will ‘win the hearts and minds of the world,'” published June 9, 2017 by CNN.

Likewise, last November the restaurant consultancy group Baum + Whiteman published their annual Food and Beverage Trend Report, indicating a growing interest in Filipino food. “In 2018, expect to see that interest bring Filipino cuisine into the mainstream dining world, in the same manner of previous culinary revelations from Asia, such as Thai, Vietnamese and Korean cuisines,” said an article about the report, published by News18.com.

On the surface, the sudden interest in Filipino cuisine and culture might seem like a good thing. Baum + Whiteman’s report refers to dishes such as lumpia, sisig, longganisa, and kare-kare, calling them “fragrant, spicy and acidically bracing.” Bringing these foods to the forefront is a way of celebrating the culture of an underrepresented population in the United States. It also gives many who would not have the chance otherwise an opportunity for exposure to other cultures and a chance to learn about them. However, there is something highly problematic about referring to the food millions of people have been eating for centuries as a “trend.” It’s inherently dismissive of the culture and the people who embody it.

“Filipino food isn’t a new, invented fad that suddenly captivated the restaurant world. So the very nature of tagging something as a trend also gives it a shelf life that is set to expire after its moment of popularity,” wrote Khushbu Shah in her article “The problem with calling ‘ethnic’ cuisine a trend,” published Aug. 3, by Thrillist.

Calling ethnic food a trend is essentially taking the daily sustenance and culture of an entire community of people and saying that it is cool now because a couple of White guys on the Food Network said so. The cuisines of Vietnam, Korea, Thailand, the Philippines and others have been around for centuries. They don’t need the approval of mainstream White America to be enjoyed.

In fact, this approval rings particularly false when one considers how often immigrants are criticized for their food habits in the United States. Ruth Tam described being embarrassed by the intense smells of her father’s cooking after a friend said her house smelled of “Chinese grossness” in her article “How it feels when White people shame your culture’s food—then make it trendy,” published Aug. 31, 2015 by The Washington Post.

Similarly, Kashmira Gander recounted how her friends reacted to one of her favorite Persian treats, halva, at school.

“‘What the hell is that?! Is it poo?! Why are you eating that?’ laughed one of my friends, as I offered them a square. They saw the brown colour and rejected it outright. Unable to articulate that, well, chocolate is brown but we eat that, it’s safe to say that I stuck with eating halva at home and didn’t really mention Persian food after that,” wrote Gander in her article “Gentrification of food: Why we need to stop calling immigrant cuisine ‘ethnic’,” published Sep. 20, by the Independent.

It is deeply ironic that Filipino people, who shocked and disgusted many Americans for years by eating balut, a fertilized developing duck embryo that’s been boiled inside the shell, should suddenly have their cuisine applauded as “the next big thing.”

What’s worse, the term “ethnic” has deeply racist undertones when applied to food.

“When we call a food ethnic, we are signifying a difference but also a certain kind of inferiority. French cuisine has never been defined as ethnic. Japanese cuisine is not considered ethnic today. Those are examples of cuisines that are both foreign and prestigious. There is no inferiority associated with them,” said Krishnendu Ray, author of “The Ethnic Restaurateur,” in an interview with Roberto Ferdman published April 22, 2016 by The Washington Post.

Because these ethnicities are considered inferior, so are their foods, and vice versa. Ray went on to say that while Americans might claim to love foods from China, India, and Korea as much as they love those from France and Italy, this didn’t prove true in the marketplace.

These cuisines are just as complex and varied as French or Italian cuisines, but because they can’t bring in as much money in the U.S., they are also a lot less likely to be authentic. It says something about the American consumer that when something looks authentic and coordinates with their preconceived stereotypes of a country they assume it is in fact authentic. “Most Japanese restaurants in the United States are run by Chinese, most inexpensive ones anyway,” Ray said.

This is because many White Americans can’t tell the difference. If someone who looks East Asian is serving Japanese food, generally the assumption is that they are Japanese, when in many cases they aren’t. Professionally trained Japanese sushi chefs are not as likely to remain in the U.S. when they could be paid more for their skills in Japan, and if they do remain it will be at higher end restaurants.

Similarly, “most cheap Indian food is made by Bangladeshis and Pakistanis, and most Indian food here is cheap. Of course, people don’t realize that. But it’s true. More than 70 percent of the Indian restaurants in New York City, for instance, are not run by Indians. They are run by Bangladeshi and Pakistani restaurateurs. And you know what? All of this works, because we can’t make out the difference,” Ray said.

Elevating some of these cuisines to “trending” status may temporarily boost them economically, but in the end it is not the people who actually belong to these cultures who profit.

“The immigrant-run restaurants, perhaps in less hip parts of a city, are rarely the ones visited by the nationally renowned critics, and consequently hardly appear on the ‘best of’ lists put out by glossy magazines,” wrote Shah. “Those honors are typically reserved for White male-run versions of such restaurants in neighborhoods that immigrants are frequently priced out of. These men go on to become known as the experts of the cuisine—the people who receive the prestige and the paycheck after the ‘ethnic’ cuisine becomes trendy.”

Making ethnic food trendy is a gimmick which reaps profits for men like Zimmern and Bourdain while sating middle class Americans’ desire for something new and different.

“In the United States, immigrant food is often treated like discount tourism — a cheap means for foodies to feel worldly without leaving the comfort of their neighborhood — or high-minded fusion — a stylish way for American chefs to use other cultures’ cuisines to reap profit,” Tam wrote.

Meanwhile, immigrants continue to make and eat the same traditional foods of their culture just as they always have, with no benefit to their social or monetary status.

Filipino food is not just some trend. It is a cuisine with a rich history and culture associated with an entire people. It should not be treated with the same novelty as ripped jeans, fidget spinners and chokers. It has been here long before outsiders noticed and it will continue to be enjoyed long after the magazines declare some other culture’s delicatessen the next big thing.

Americans interested in so-called “ethnic” cuisines should still continue to explore and try new things. They just need to do their research and make sure that what they’re eating is the real thing, while realizing that authenticity may cost a little extra. They should be aware that so much more goes into what ends up on their plate than just the ingredients, and work to support the people whose culture they are enjoying.

Foodies should look for writers like Monica Bhide, who explores the culture behind each of the dishes she writes about, or cookbook authors like Maangchi, who documents the recipes of traditional Korean food.

“Fashionable food from foreign cultures may satisfy a temporary hunger, but if you’re trying it for shallow reasons, you’ll be culturally unfulfilled in the long run,” Tam wrote. “The best meals are more than the sum of their ingredients; their flavors tell the stories of the rich cultures that created them. When the same respect is afforded to immigrant food as traditional ‘American’ food, eating it will save us in more ways than one.”