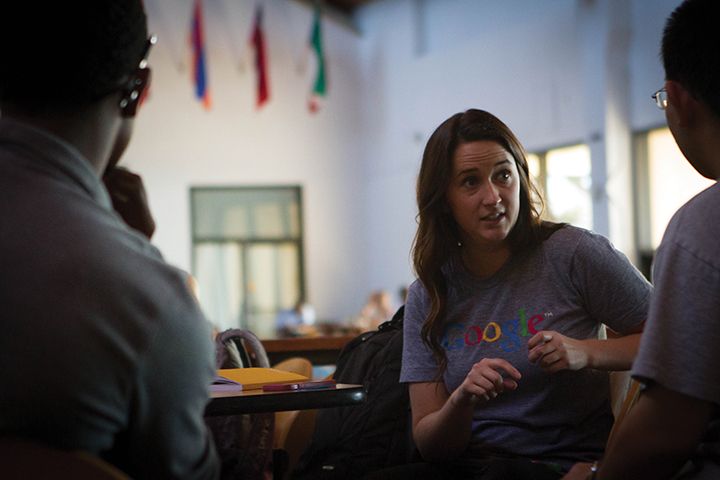 Awarded the number one spot on Fortune’s list of “100 Best Companies to Work For” for the fourth year in a row, Google is a company that knows how to recruit and retain employees.

And now they’re setting their sights on Pepperdine.

Wycoff spoke primarily about the company’s mission and goals, but also shared knowledge from her three years of experience working at the company. While Wycoff’s ultimate goal was to promote graduating seniors to apply for open positions in Google’s People Operations, Marketing and Global Consumer Experience Sales departments, she also discussed the 11-week internship program available for juniors.

Events and Employer Relations Coordinator Suzanne Inman said that while only 37 students RSVP’d to the event, more than 110 were in attendance. Students were awarded Google yo-yos, sunglasses and bags for correctly answering trivia questions about the company.

As the presentation progressed, Wycoff steered away from basic company facts and revealed why Pepperdine students would make good “Googlers.” These include the company’s commitment to collaboration, transparency, innovation and community, as well as their dedication to individual service. 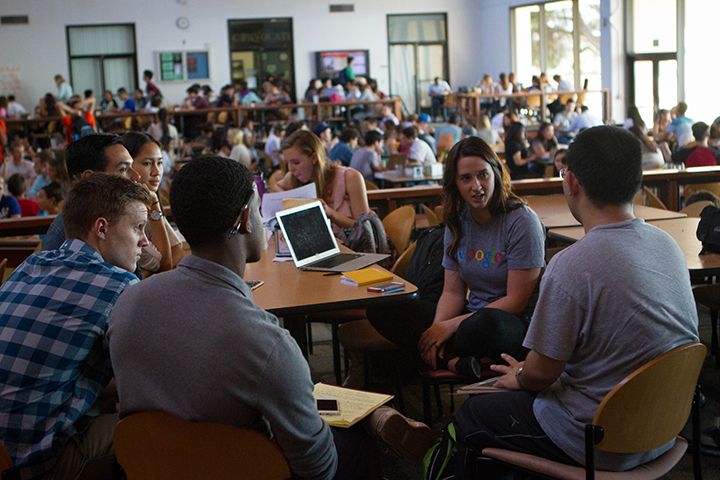 GOOGLE IT // Tori Wycoff informs students of available jobs and internships at Google in the Waves Cafe during the Google presentation. There are 48 alumni working for Google and they are looking for more.

“I definitely think that Pepperdine’s mission to be service-oriented aligns with Google’s mission in that as well,” Wycoff said.

Students from all grade levels were present at the talk, each with their own reasons for attending.

“After watching ‘The Internship,’ the movie, and seeing about all of the perks, I thought I would come check out what life was like working for Google,” senior Carissa Heller said.

“I came because I like that she said that Google does things that matter … And I think that for any college student who is a senior and about to graduate, where else do you want to work but Google?” senior Michelle Chan said.

Although the job positions Wycoff focused on were non-technical positions, computer science majors who attended said they were hopeful Google is also seeking students with their skill sets.     “I wish they would have covered the computer science and technical side of Google … but Pepperdine doesn’t really promote computer science very much since it’s a half-major,” junior Austin Broadwell said.

Although Google’s visit to campus this year was a test-run, it is possible they will return to continue forming their relationship with the university.

The choice to add Pepperdine to the program was based on the majors Google generally looks to hire into, as well as the employees who work at the company. Wycoff said 48 Pepperdine alumni currently work at Google, but if the Campus Advocate Program continues, it could potentially increase that statistic.

The version of this article that ran in the Oct. 2 2014, issue of the Graphic incorrectly stated that Google’s internship program is open to sophomores and juniors. The program is only available for current college juniors. 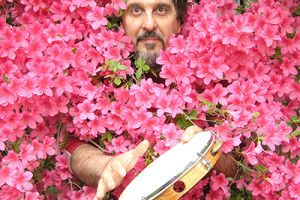 Photo Courtesy of Dave Obenour If there has ever been a time in your life that you wanted to dance passionately with the musicians...
Copyright 2013 Jupiter Premium Magazine Theme
Back to top