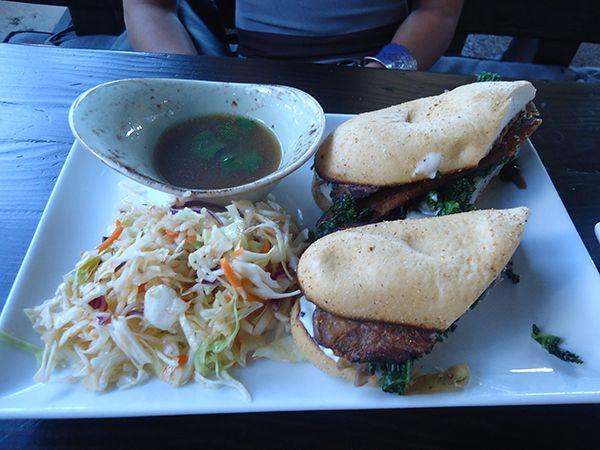 Since many Pepperdine students make Pavilions runs, order burritos from Lily’s and grab Acai bowls from Sunlife, one would think that there would be some chatter about the newly opened gastropub Duck Dive, located in the same plaza.

There was a moderate crowd on the Saturday afternoon that my friends and I decided to pay a visit. Greeted by the sound of upbeat, bluesy music — which later transitioned into jazz and country music — Duck Dive offers an easygoing and playful vibe. We opted to dine outside and take advantage of the combination of the prime 75-degree afternoon as well as the laidback atmosphere of the restaurant.

The menu offers a range of food and drink, including smaller plates to snack on as well as bigger portions to share. Although we were only a party of three, our appetites led us to order mac and cheese along with a plate of pita bread and hummus as precursors to our main entrees. The “Drunken Mac” was accompanied by caramelized onions and a breaded top layer; its cheesiness was not too overwhelming and the pasta was cooked perfectly, but it wasn’t anything too out of the ordinary.

The homemade hummus, however, won a friend who normally has a distaste for it; this appetizer came with carrots, celery and broccoli alongside the pita. The portions were smaller than expected, but in retrospect that may have been a blessing in disguise in reference to the quantity of food that we ordered.

We each chose the “Duck Dip Au Jus Sliders” as our choice of entree, which includes duck meat, kale, bacon strips, caramelized onions and gruyere served with a side of duck jus (translated literally as duck juice or sauce) for you to dip your sandwich into as you eat to add another savory element to your individual bites. You will not find blandness to be an issue at this restaurant — this was definitely one of those meals that will not bore you. We all thoroughly enjoyed this entree and would recommend it to anyone who is looking to try this place out.

Our waitress was very friendly and accommodating — she warmly obliged to our sandwich modifications and even told us about an event that night in Santa Monica — and the other waiters were also quick to refill our waters and mindful of when we were finished with our meals so as to keep us from waiting on them. If you are looking for a relaxed time with some friends at a sit-down restaurant instead of the typical grab-and-go nature of neighboring restaurants like Lily’s or Sunlife, don’t hesitate to walk a few more steps and try out this (somewhat hidden) gem. Duck Dive is located on 29169 Heathercliff Road in Malibu.