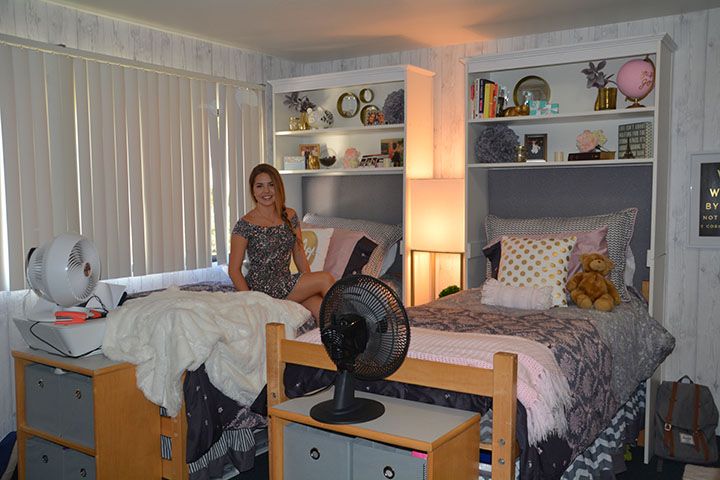 Walking into Knott House’s F Suite, you would not expect the incredible showcase of interior design hiding behind one of the room’s doors. Aside from the dark-colored shag rug on the ground, accent throw blankets resting on the couches and a flat-screen television, the suite looks like a standard freshman suite at Pepperdine.

Although all the rooms in F Suite are unique and stylish, it is room F1 that has captivated the attention of many at Pepperdine, drawing curious visitors to Knott, eager to experience the legendary room for themselves. Freshman Haley Smart and her roommate, Alex Lehman, said they never expected any of this.

“Everyone kind of knows about my room, and I didn’t mean for it to be like that,” Smart said.

For Smart, the proud designer of the room, home is in Corona, California. With her mother’s professional assistance, she created the vision and layout of her new room. Studied in interior design as well as a working professional, Smart’s mother is experienced in the field, and she certainly has a talent for converting the ordinary into something show-stopping.

Entering F1, you are immediately awestruck with the attention to detail. Cramped freshman dorm rooms are so commonly Target-styled and filled with strategic bins and boxes used to maximize space. Therefore, my expectations for her famed room could only be so high. However, I quite literally gasped upon entering.

There it was — the display I had been waiting to see. F1 represented a creative oasis within a desert of dormitory normalcy. Two beds sit side by side, pushed against the wall and nestled within a white, shelved bed cubby.

The comforters on the beds are identical, and the color scheme of blue-gray, pink, white and gold carries through the whole room. Three pillows sit atop both of the beds, two alike, and one white-and-gold accent pillow differing in style. On the shelves above the bed, Smart and Lehman have various decorations, such as mirrors, jars and picture frames.

The cream-and-pink draped curtains that loosely hang on the window provide both shade from the afternoon sun and an atmosphere of sophistication.

Perhaps the most jaw-dropping element of the impressive design is the wall covering. The wallpaper resembles rustic, white wood — an entirely unique effect on Pepperdine’s otherwise naked walls.

The room has an atmosphere of classiness, coordination and, of course, home. The traces of meticulously planned symmetry remain steady as you move about the room, implying the work of a seasoned interior designer.

Smart, a recently-declared PR major, credits her mother for her artistic influence.

Surprisingly, the coordination of the room — including the design itself — was fairly last minute.

“We went shopping the weekend before, so we didn’t really plan this out,” Smart said.

The finished project reflects contribution from Lehman, Smart’s roommate, as well. Smart was the chief visionary, making major decisions, while her mother provided the fabrics. Lehman’s artistic talent showed through her addition of paintings to the room, according to Smart. Lehman said she was completely satisfied with the end result.

“I never grew up in a super fancy room or anything,” Lehman said. “I had a few pictures on my wall, but I’ve never been into decorating. Haley and I went to Subway, came back and the room was totally decorated. It was like Christmas almost.”

When Smart compared her room at Pepperdine to her room back home, she described them as significantly different. Her room since elementary school has had a color scheme of light blue-gray with black, silver and white accents. It contains stainless-steel accessories because of her father’s sheet metal company.

In contrast, she described her F Suite room as more feminine.

Smart said she prefers her room in Corona, yet appreciates her current living situation, as it represents a style she has not yet experienced. Interestingly, Smart identified her room in Knott as not fully reflective of her style, as she aimed to incorporate both her roommate’s styles and her own into the design. Smart even recently removed the curtain, because it felt too frilly. Her true style was better understood when she provided a vision for her dream home.

“When I have my own house, I want it to be all white and simplistic modern,” Smart said. “It is more of a masculine look, but I think I like that better.”

Entirely unique among the freshman dorms, Smart’s room has deservedly attracted much attention. Smart said she did not intend for her room to be a discussed topic among Pepperdine students; rather, she simply sought to create a feel of home with an original style.

Smart’s suitemates embrace F1’s setup as much as the rest of Pepperdine.

“I thought it was really cool, cute and fun,” freshman Hannah Almsted said, a resident in Knott F Suite. “It is aesthetically pleasing and brings interest to the suite. When I tell people what suite I’m in, people say, ‘Oh you’re in the suite with the really cool room?’”

For Smart, however, the room is merely an outlet to foster her creativity, which she aims to gear toward event planning later in life.

Smart concluded, “It’s cool that people know about it, but I didn’t do it so that a lot of people would know about it.”