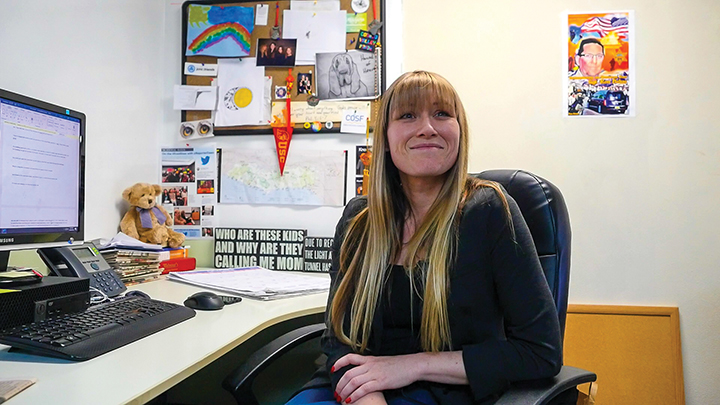 She cries at home, in her car and at her desk at the Thousand Oaks Acorn, where she writes profiles about the survivors and the families of the victims of the Borderline Shooting.

“She’s taking it personally and has agreed to do all these,” said her editor Kyle Jorrey, a 2004 Pepperdine alumnus. “She doesn’t want to give that up.”

Megli was asleep on the night of the shooting after she and fellow reporter Becca Whitnall did extensive coverage on the Thousand Oaks elections held Tuesday, Nov. 6, 2018.

“We just put to bed what we thought was going to be the biggest paper of the year,” Megli said.

That night, Jorrey went alone to Borderline to cover the incident. The next morning, the election issue was already irrelevant, Megli said.

“By the time it came out the next morning, 12 people had been murdered, and it just seem[ed] so inconsequential who’d won the election,” she said.

She knew that the Acorn had already done the initial reporting on the event and the memorial, but she said she felt like she wanted to do something more.

“I got down on my knees and I prayed and I just felt like God really put it on my heart that I needed to do as much Borderline reporting as possible,” Megli said. “And it really needed to be focused on all the families of the victims.”

She went on to write in-depth profiles on 8 of the 12 victims, with a ninth written by Ian Bradley.

“He actually grew up with Tel Orfanos, and so the Orfanos family specifically requested him,” Megli said about Bradley.

Jorrey, however, said he was concerned about the impact that so many of these stories would have on Megli.

Megli, dedicated to this project, said she wrote the articles to honor who the victims were.

“I wanted every family to have an article that they could be proud of and point to and say, ‘Hey, that was my husband, that was my son, that was my daughter,’” she said.

But more than anything, she said she wanted these profiles to bring some hope in spite of the hurt.

For her, these profiles are a way to cope with the deep emotions she experiences from reporting on Borderline, Megli said.

“Once I can get it into an article, once I can take this horrible story and give it a beginning, a middle and an end, and end it with an inspirational quote, that’s my way of processing it,” Megli said.

She said the Borderline reporting has not stopped for her.

“It went from talking about the incident to profiling the victims, talking to the survivors, and now it has been all about the recovery and what people are anticipating and hoping for when it comes to the one-year anniversary,” she said.

Megli said she still frequently meets with the survivors and families of the victims of Borderline.

“It’s actually been one of the most rewarding things I’ve ever done to be able to form relationships with these people,” Megli said. “We get coffee; we hike. We run into each other a lot just at Borderline functions.”

These people have welcomed her warmly in literal open arms, especially the families of the victims she has profiled.

“I just feel really privileged to be invited into their lives at such a painful and intimate moment,” Megli said.

Through her profiling and reporting, Megli said she has come across many individuals who have impacted her through their words. 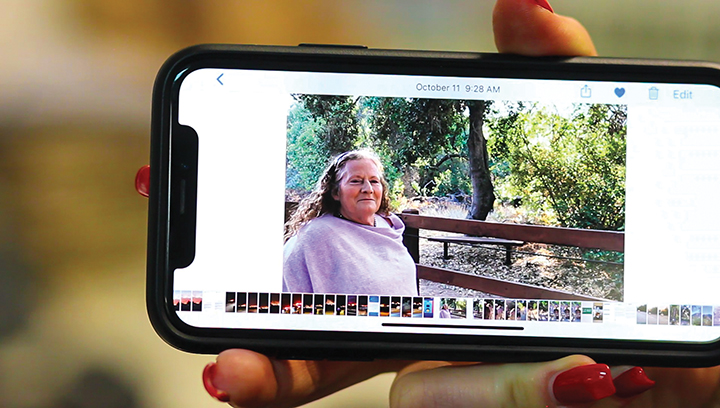 On one particular hike, Wendy Anderson, the mother of Borderline victim Noel Sparks, reflected back on the day she lost her daughter.

“She said, ‘Nov. 7 was the day the devil came to town, but we pulled together as a community and chased him out,’” Megli said. “Amen, sister.” 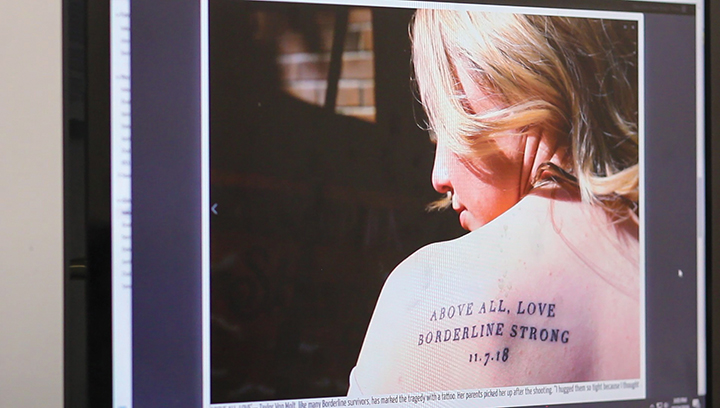 In a series she wrote called SURVIVING BORDERLINE, Megli talked with survivor Taylor Von Molt, whose motto touched her the most: “We get to.”

“When she’s having a bad day, when she’s stuck in traffic, she’s like, ‘We get to have a bad day. We get to sit in traffic. We get to take that big test at school, but our friends don’t get to, so we have to live in honor of them,” Megli said.

In the aftermath of the Woolsey Fire, a teacher from Newbury Park High School invited her to come with him as he returned to his burnt home for the first time. He was not there for the ashes of his home; he was there to recover his father-in-law’s urn.

“I’m proud to report he found them,” Megli said. “Beauty from ashes.” 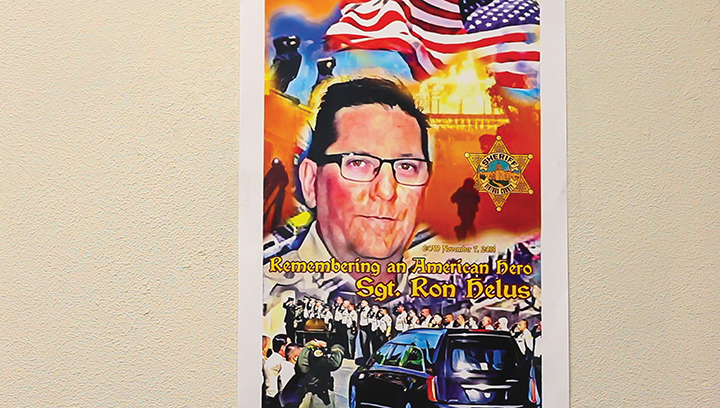 This is in reference to a text she received from Karen Helus, wife of Sergeant Ron Helus, regarding the remembrance of her husband as a hero.

Reading the text, Megli said, “The last year has been nothing short of beauty coming from the ashes of tragedy.”

Megli said she finds the beauty in the little things, in conversation with others. She finds comfort and peace in hiking and in talking with her pastor and her father, a retired assistant chief for Ventura County Fire Department. Sometimes, she hikes while talking with her father, who, influenced by 36 years as a firefighter, calls such talks “critical incident debriefings.” 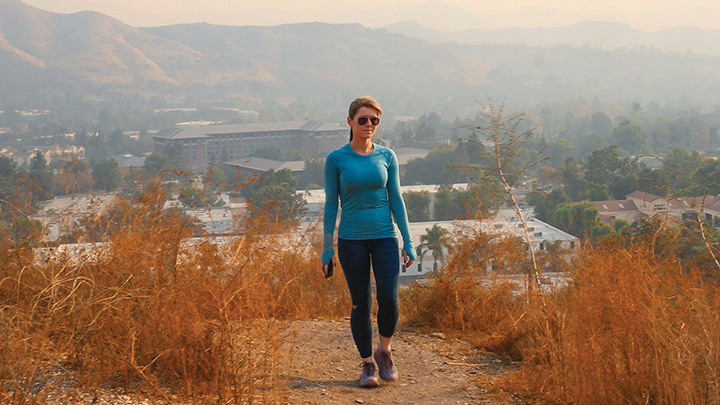 “He shares stories with me about some of the things that he’s seen and that helps because it helps me feel not so alone,” she said.

In fact, she said she has a whole village of people she can rely on, as well as her faith in God.

“It just hit me that God gave me a job to do, but God also gave me the grace to do it,” Megli said. “And I think that’s the thing that I’ve been the most grateful for — that I’ve been on this journey, but I haven’t been on it alone and I haven’t been carrying this burden by myself. Not only have I had this amazing community of colleagues and victims and survivors and my parents around me, but I’ve also had God there every step of the way.”

The truth of the matter is that she works for local newspaper, so these kinds of events will have a lasting impact on the community, Jorrey said.

“We’re never really going to completely move on,” he said. “Whereas the national media, the CNN, even the LA Times — eventually they’ve got bigger stories. This will be our biggest story for years to come.”

As for Megli, she said she will continue to collect these stories and cry because, for her, it’s important.

“If you were in Thousand Oaks during those days, everyone has a story to tell,” she said. “We don’t want those stories to just disappear.” 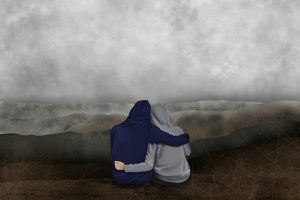 Art by Caitlin RoarkAfter the Borderline Shooting and the Woolsey Fire, the only thing I thought I needed was to get away....
Copyright 2013 Jupiter Premium Magazine Theme
Back to top