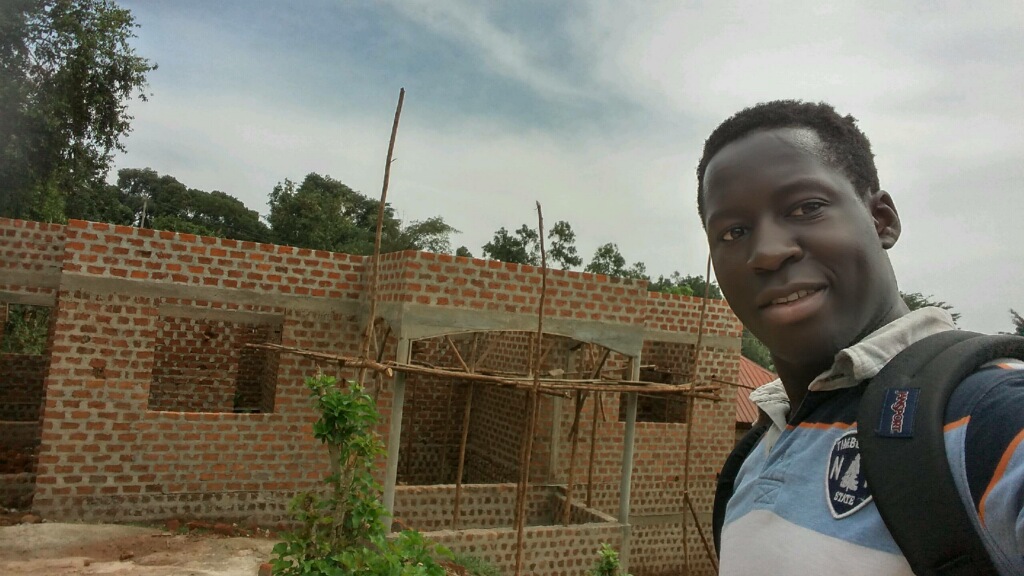 Senior Daniel Kibuuka met the people who would help change the course of his life when he accidentally broke one of their windows as a child. They called him in for a talk, and he said he knew he was “in so much trouble.”

But instead, the people inside the building — representatives of Ashinaga, a nonprofit organization that provides financial and emotional support to children who have lost one or both parents — told him to register with them.

“They were not necessarily impressed,” Kibuuka said about the broken window. “But they talked to me, and I think they handled me a little more friendly than you would handle someone who just broke your window.”

They have now been his sponsors for about 15 years.

Kibuuka grew up about 7 miles outside of Kampala, Uganda, in a neighborhood that he describes as “pretty poor.” He said he saw many in his neighborhood struggle to find stable work.

He started working odd jobs at the age of 9. He missed a lot of school. By the time he got to high school, Kibuuka had made bricks, worked at an events company in cooking and decorating, and served as student body president at his school.

When he was 15, he worked the same job with people who had to use the same wage to support a family.

“So you have a family, you’re getting the same money as me and you have to support someone about my age or even younger,” he explained. “It wasn’t good. I could see that I [didn’t] really want to be this.”

Kibuuka lost both of his parents and lived with his grandmother for most of his childhood. “She didn’t want a lot of people in her house,” he explained, “but if she accepted you it meant you could live with her, otherwise she was going to live alone.”

His grandmother loved having short-term visitors, though, so Kibuuka met people from several generations and got to know their struggles, some of which he shared.

“I grew up in those issues,” he said. “I knew. It wasn’t like a study of those people, but it was out of experience.”

He said he wanted to contribute to their lives but didn’t know how. Now, after four years at Pepperdine University and countless international experiences, his plan to give back is starting to literally take shape — in the form of a brick building.

From the Ground Up

In addition to being a full-time student and recently picking up a nonprofit minor at Pepperdine, Kibuuka is overseeing the construction of his own marketing agency in Uganda. He calls each night at midnight PST to check up on the builders’ progress. Soon, he said, they will start roofing.

He’s focusing on marketing because it’s his passion, he said, but he plans to continue working with nonprofit agencies through this new venture.

“I think I was kind of raised by a nonprofit for the most part. I’ve lived with them for so long,” he said. There have been times when he’s lost faith in Uganda’s government and other institutions, but he’s always known of nonprofits he could trust. He said he always knew he would work with a nonprofit even if he wasn’t working for one.

“Because I want to do very many things, the best way I can fulfill this is supporting those [nonprofits] that already exist with my skills and my resources,” Kibuuka said. He plans to help nonprofits with web development, coverage, video reports and fundraising. 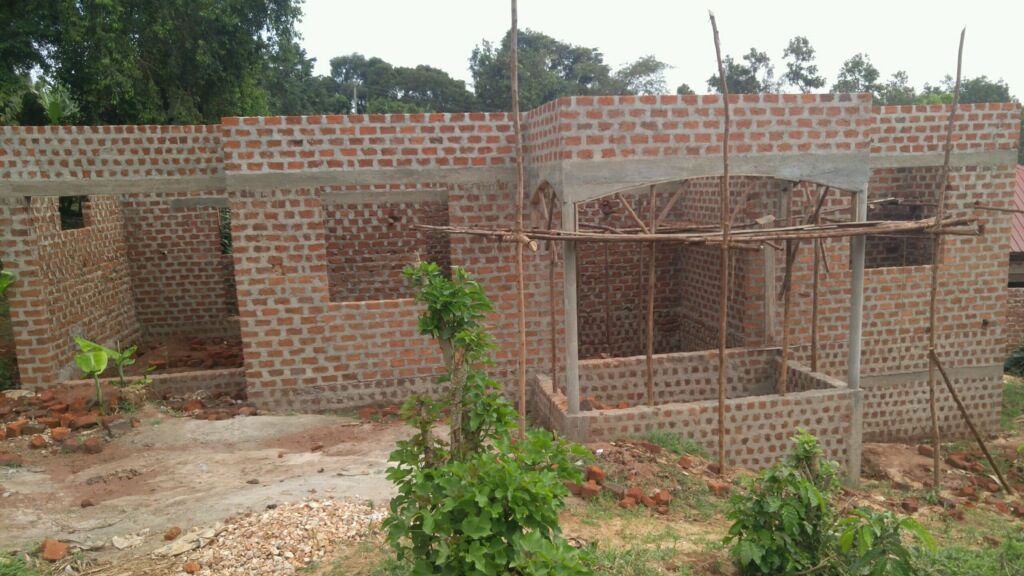 “I wanted something that exists, so people can come to work in the morning and then go back home knowing that they have a job the following day,” he said.

Growing up in Uganda, most of the people he knew worked seasonal jobs, including construction projects — just like the workers who are currently building his house. When the construction project is done, Kibuuka said, those workers will have to search for another job. By creating something physical, Kibuuka said he hopes he will create stable, ongoing work for more people in his community.

“Also, I think it’s something that will exist after I leave,” he said. “It’s not going to be because I live, but it’s going to exist beyond my own life. And it will help a lot of people, even more people than I will be able to see.”

He visited his new building for the first time during Spring Break. He wasn’t there for long — just long enough to walk around the site and snap some pictures. The people in the area had never seen him, he said, and had no idea who owned the land. He showed up in shorts.

“For them to see someone who has land and they’re in shorts, they think you’re just a very small boy,” he said, laughing. “Some of them were confused — why is this guy taking pictures of someone else’s land?”

Kibuuka did not always have these goals in mind.

“When I was at my grandmom’s place, actually, I didn’t have visions like what I have [now],” he said. “My perspective of the world was very limited. Until I came to Pepperdine, I’d never left my country before, so a lot of things have changed.”

Ashinaga supported him through high school and Kibuuka graduated in 2012 with a class of 68 people. He turned down an opportunity to start university in 2013 because he had seen people in his area struggle to find work even with a degree.

“I didn’t want to have the same degree that I know that someone has … and they only make $100 a month,” he said.

He did well in school and Ashinaga encouraged him to apply to a college in the United States. A friend from Princeton helped Kibuuka narrow down his choices — it had to be a top 100 school, Christian, small and “far away in a place that doesn’t freeze,” Kibuuka said. “It was exactly Pepperdine.” 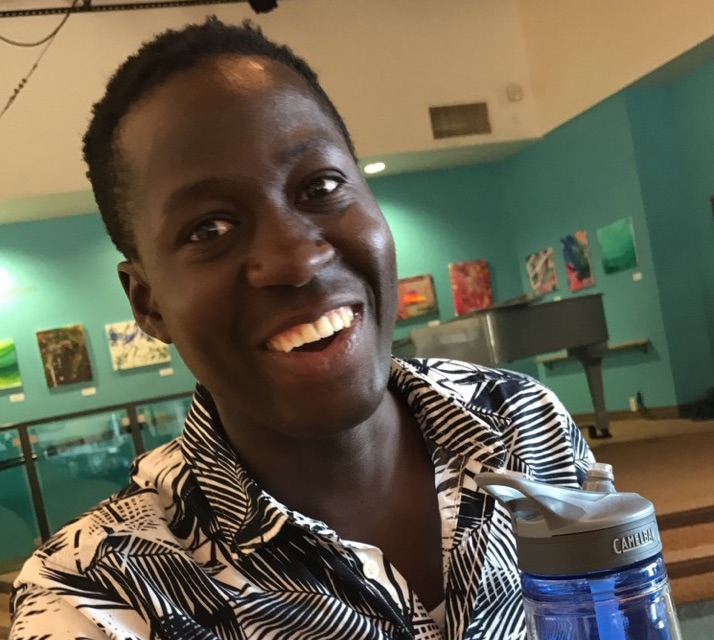 But the price tag of a Pepperdine tuition proved to be an issue for the nonprofit — they told Kibuuka that for the cost of one year at Pepperdine, they could fund eight students through their entire college careers in Japan. The president of the organization ultimately offered to personally pay for Kibuuka to attend Pepperdine from his own finances if Kibuuka got accepted.

On April 25 at 9:30 p.m., Kibuuka was watching Captain America with some friends when his phone rang. It was Pepperdine.

“‘Hey, you’ve been admitted in,’” Kibuuka recounted. “‘Actually you won’t have to worry about your tuition. We’re going to pay for your entire tuition, housing, room and board. And also, you can come here anytime you want.’”

Socquet herself opened her home to Kibuuka for the months before the Pepperdine school year started while he attended some preparatory courses at California Lutheran University in Thousand Oaks. Socquet refers to Kibuuka as her son. Her husband quickly began calling him “the golden boy,” she said, “because of all the success just due to his ambition and his optimism and his positivity.”

They helped him refine his pronunciation of some English words, took him to the beach for the first time, and he soon became like part of the family, Socquet said. They enjoyed watching Marvel movies together, and Kibuuka helped with yard work and cleaning out the garage.

“He doesn’t let any grass grow under his feet,” Socquet said. “He’s always looking to help somebody.”

Since Kibuuka started at Pepperdine, he has worked for the Office of International Student Services, the Dean’s Office and for Housing and Residence Life as a Residential Advisor. Socquet said she’s always surprised if she meets someone who doesn’t know him.

She recalled a time when she had arranged to pick him up from the Starbucks in Malibu Country Mart after he finished work. When she and her family arrived, they saw him sitting near the window, immersed in conversation with the people next to him.

“He got up and came out, and I said, ‘So Daniel, who are your friends?’ and he said, ‘Well, the gentleman is called Mr. Petersen …’ and he told me all about Mr. Petersen,” Socquet said. “That’s exactly what I expected. He probably met everyone in Starbucks while we were gone.”

Senior Tierney Anderson has known Kibuuka since second semester of her freshman year when they met in Social Action and Justice Colloquium class. Anderson said he would always show up to group meetings 15 minutes early to just hang out. Since then, he has gotten to know everyone in her family and often inquires about each of them. She said he’s probably the most positive person she’s ever known.

“He’s so good about remembering what you have going on in your life and asking about it and letting you know that he’s praying for you,” she said. 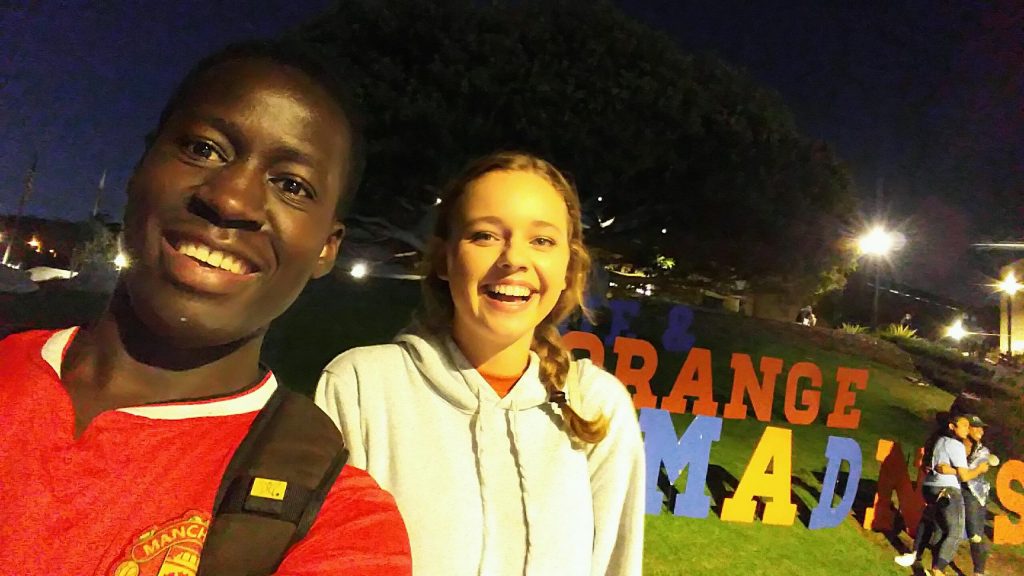 One of Anderson’s favorite stories about Kibuuka took place in Greece, where Anderson and Kibuuka went on an educational field trip while studying abroad together in London. The group was about to go up to the Acropolis — which required tickets — and Kibuuka was nowhere in sight.

“At that point abroad, we’d already lost Daniel a few times,” Anderson laughed. He had a habit of getting caught up in conversations and being late. The group finally decided to continue without him.

“We started walking and we got half way up, and Daniel appeared,” she said. “He’d talked his way right onto the Acropolis. That’s a highlight.”

Kibuuka is now facing the same question most college seniors contend with as they near the end of their college career — what comes next?

When his building is finished and Kibuuka graduates from Pepperdine, he said he will split his time between working in Uganda and the U.S.

Socquet said whatever he ends up doing, she’s “sure it will be golden.”

“I only see him very seldom anymore and every time I do, he’s accomplished some major thing,” Socquet said.

But there is one thing that Kibuuka said will not change.

For the past few years, he has devoted about an hour and a half of his time to speaking with Ugandan kids who have been brought back to school through Ashinaga’s programs. Some of the children in the classes he speaks with have been out of school for as long as two years. They are given intensive classes so they can catch up before they are taken to ordinary schools, Kibuuka said. 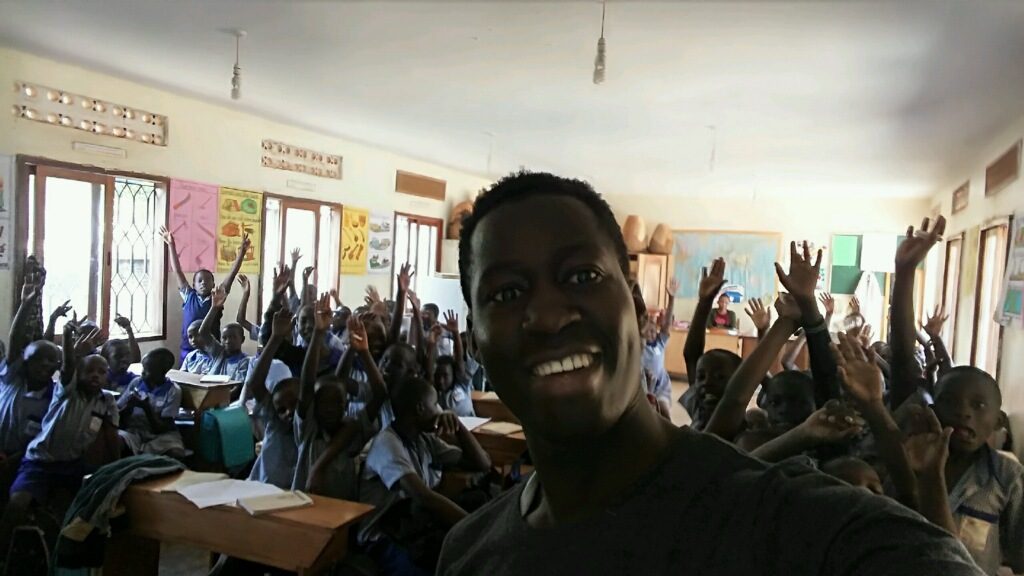 “Every year I go back [to Uganda], there’s one thing that doesn’t change on my schedule, whether I have two days, or three or five — I have to talk to these kids,” Kibuuka said.

He said that bringing these kids back to school is “life-changing.”

“I don’t know where I could have been if I did not go to school,” Kibuuka said. “There were a lot of times in my life when I was very close to not going back to school.”

When he visits, he said he spends time getting to know them and they have more serious conversations.

“I get more serious than most people here have ever seen me when I’m talking to these kids,” he said. “And then we have fun. We have fun.”