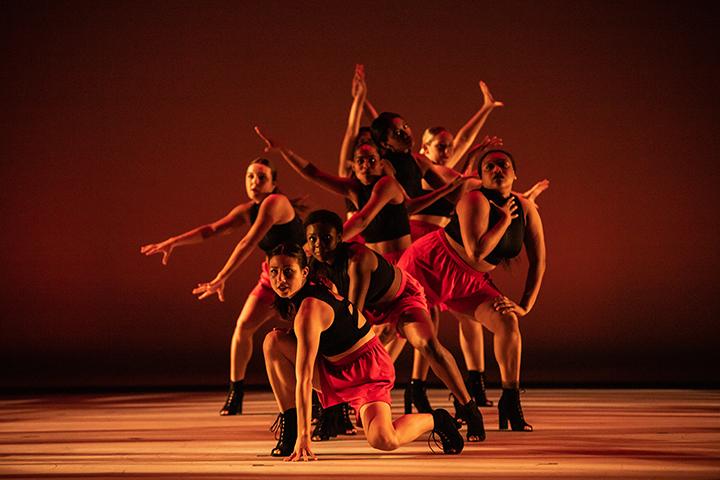 Assistant Student Director Natalie Chan (center front) leads a number from this year’s Dance in Flight (DIF) performance, themed by the question “What Do You Feel?” The show runs from Thurs., Feb. 13, until Sat., Feb 15.

Dance in Flight (DIF) takes the stage Thursday night to kick off their weekend-long string of performances.

“I think that dance builds a really strong community of friends because you all obviously share a passion for the art that it creates,” freshman DIF dancer Caroline Macleod said. “It’s for people who prefer to tell art by using their body, as opposed to a canvas.”

DIF, Pepperdine’s dance company, has worked on the performance since September 2019.

Every year, DIF performances originate from a central theme. Macleod said this year’s theme, “What Do You Feel?” explores different emotions and human experiences.

“It’s definitely a lot more of a modern artwork compared to some of the past themes — like the ’70s, for example — which is a lot more straightforward,” Macleod said.

Senior Bella Alabi said this year’s theme is meant to provoke thought within audiences. Several of the pieces have personal connections with the choreographers.

“This year, the theme was a question, and it’s typically something conceptual,” Alabi said. “I think their goal was to have people reflect within themselves and have them be responsive instead of just watching.”

Alabi has performed in DIF for all three years she has been at the Malibu campus, not counting her sophomore abroad in Florence.

“My favorite part [of dance] is getting to let go of everything else and just move how I want my body to move and express what I want to express without anyone telling me what to do or how to feel in that moment,” she said.

Before dancers begin rehearsals, it is up to choreographers to take a conceptualized idea and turn it into a palpable routine, senior DIF choreographer Hailey Flame said.

“I’ve kind of always had the same process for thinking for it because I’ve been choreographing for a long, long time,” Flame said. “I normally just find a song that I really like … or I feel some sort of connection to it, or it just kind of inspires me to start moving. I’ll just kind of start dancing, and then eventually, something will kind of happen over and over again that it just stays in my body, and then it kind of sets, and then I move on.”

While Flame creates ideas for a piece, she said she relies on the feedback from her dancers to hone and craft the dance.

“I also really like talking to my dancers and being like, ‘Hey, do you guys like this? Does this feel OK? Do you have any suggestions?’ Because I never want my dancers in my pieces to not feel good doing the movement,” Flame said.

Each DIF performance communicates a wide spectrum of energy and tones. No two pieces are alike, showcasing the depth and array of ideas from the choreographers.

“I think that this year the theme is definitely more abstract,” Macleod said. “It’s very different from anything DIF has ever put out as a performance.”

There are four DIF performances beginning Thursday night and continuing through Saturday. Tickets cost $20 for general admission and $10 for Pepperdine students.