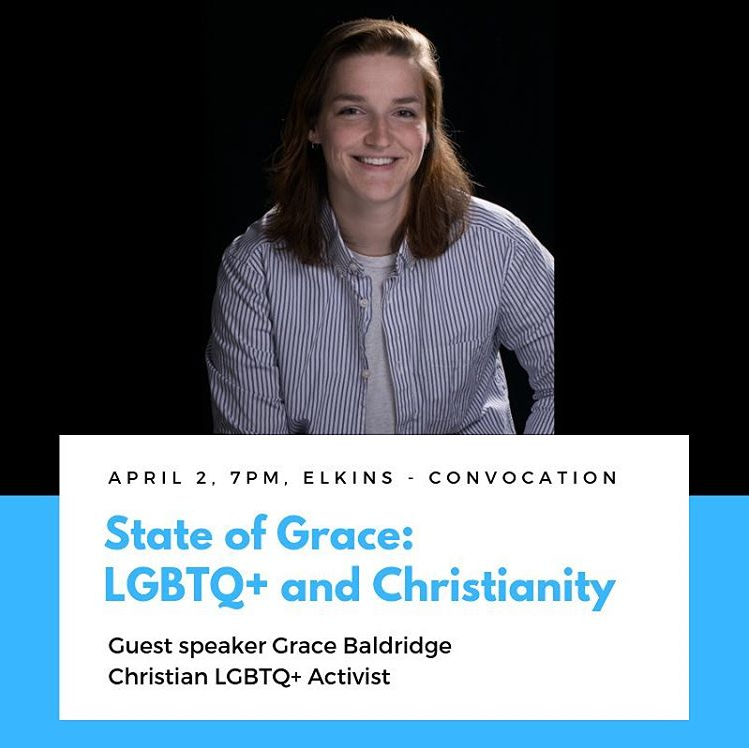 Crossroads and the Pepperdine community explored tough questions about the LGBTQ+ community and Christianity at Crossroads’ first convo.

Crossroads, Pepperdine’s LGBTQ+ and allies club, hosted their first convocation event Tuesday, April 2, in hopes of starting a conversation on the “intersection of faith and sexual identity,” according to the convocation website. The event featured producer and host Grace Baldridge’s show “State of Grace,” which aims to explore the relationship between the LGBTQ+ community and faith.

The event began with an introduction by Baldridge about the inspiration for the show, followed by a viewing of the pilot episode and an anonymous question and answer session with Baldridge and Crossroads President Grace Ramsey.

“We’re trying to really bridge that gap and make people know, especially in light of what happened on the Freedom Wall, that being Christian and being in the community are not mutually exclusive,” Ramsey said.

In order to keep the question and answer session anonymous, attendees were able to submit questions through the app sli.do. The subject matter ranged from Bible verses and what they mean in relation to LGBTQ+ members, to how to be involved in the LGBTQ+ community at Pepperdine, to what kind of support Baldridge would recommend for those with families who do not support their sexuality.

“I think we don’t really need to look much further than the example set by Jesus … in terms of how to love our neighbors as we should love ourselves,” Baldridge said. “It’s tricky because I disagree with so much about him [the protestor], but I can’t be mad or angry at him because I don’t feel like as Christians we’re called to be that either.”

Another question was, “what does the LGBT+ community need from their allies?”

“I think a huge part of allyship is just being active,” Baldridge said. “It’s great if you like ‘Queer Eye‘ on Netflix, but if that’s where your allyship begins and ends, that’s probably not enough. Just making sure that the people who are members of the LGBTQ+ community in your life or in your circle know that you are an ally to them and that you support them, I think that’s huge.”

Ramsey said she felt the event went well, overall, and she would like for Crossroads to continue to host events like this in the future.

“I feel like it was a real great learning opportunity,” Ramsey said. “I was happy that some people who had kind of a different perspective did end up asking some questions. I think [providing] anonymity is a great way to kind of breach that barrier to begin with. I liked that there were some questions that weren’t comfortable and were hard.”

Students who attended the event, part of the LGBTQ+ community or not, shared their enjoyment of the convocation.

“I really enjoyed the convo,” freshman Crossroads Member Sophie Miller said. “I’m glad we have it. I want more of it. I think previous discussions I’ve had with people about this topic have been a little unproductive and I think after this I’m more prepared with different perspectives and resources to have future discussions.”

Other students said they enjoyed the challenging subject matter and felt it was important for campus life.

“Grace [Baldridge] is amazing,” freshman Raymond Rider said. “I would absolutely love to [see more events like this on campus]. Things that are challenging for certain people are important. I am a major proponent for intellectual diversity and I think that things like this that challenge people are essential.”

Baldridge said she was inspired to produce “State of Grace” after asking an old friend to be her bridesmaid. The friend told Baldridge gay marriage went against her faith. Baldridge, as a Christian lesbian, was taken aback and, after having several different conversations with friends, decided to shoot “State of Grace” with Refinery29.

“I realized that I was ignorant to the struggle of so many queer people of faith, or just queer people with the regards to the treatment they received from Christians,” Baldridge said. “When I came out, my dad’s an episcopal priest, it wasn’t even a thing. … I was sheltered, and that’s a point of privilege and I wanted to get out of my bubble and I wanted to understand where [my friend] was coming from.”

The pilot episode focused on different people from Atlanta, Georgia, and their relationships with Christianity and the LGBTQ+ community. Baldridge spoke to a pride protestor, a gay man who endured conversion therapy as a teen, a non-binary Baptist and a woman who feels same-sex attraction in a heterosexual relationship.

“State of Grace” is still in the developmental phase, Baldridge said, but the goal is to continue to explore the intersection of faith and the LGBTQ+ community in the United States.

“That’s part of the idea, moving to different states, if you will, states in the different United States of Grace and seeing what stories we can find in different locations and different representations and interpretations of faith,” Baldridge said. “Not just with regards to Christianity but also different religions or people that subscribe to no religion – I want to learn about all of it.”

One of the unanswered questions that was posed during the Q&A section of the convocation pertained to Islam and the LGBTQ+ community. When asked about it after the event, Baldridge she would be comfortable broaching that subject on “State of Grace.”

“It’s hard for me to imagine a subject that we wouldn’t be interested to learn more about on ‘State of Grace,” Baldridge said. “We really want to go there and engage in conversations that we think are important and I also think are largely ignored.”

Crossroads and the Freedom Wall

Ramsey said she was driven to organize a convocation event after someone created a display talking about the LGBTQ+ community at Pepperdine on the Freedom Wall around the time a radical church group protested Pepperdine. 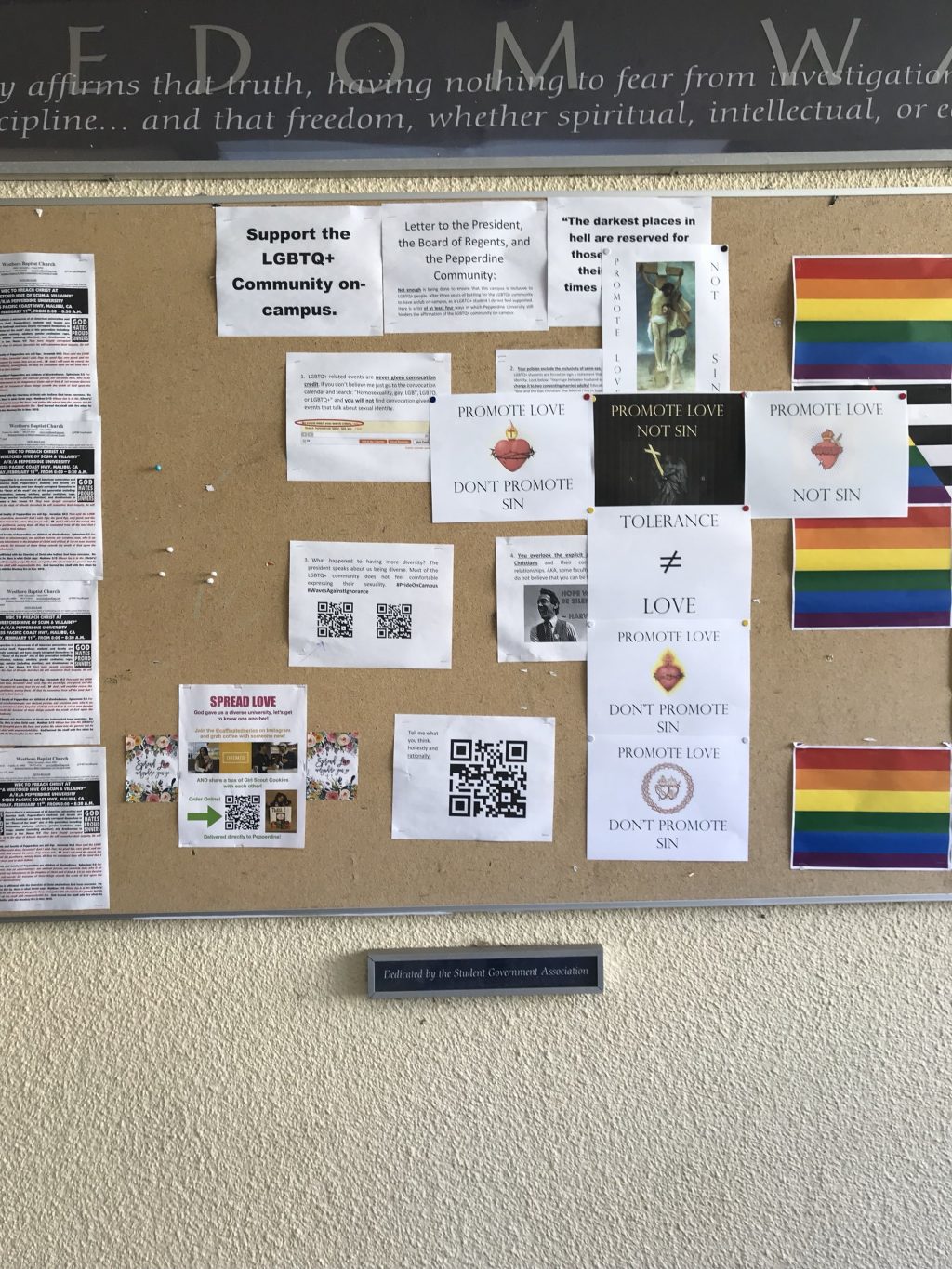 “One of the major complaints on the Freedom Wall was ‘no LGBTQ+ themed convo,’ which is what motivated me,” Ramsey said. “I was like, ‘You know what? That would be really impactful to be able see that sort of thing,’ which is why I worked so hard to get it approved.”

Ramsey said the Freedom Wall display did not seem to result in more people sharing dissenting opinions. While a debate was hosted by the Pepperdine Debate club about Christianity and the LGBTQ+ community in February, Ramsey said the people who were in attendance all shared the same opinion.

“I don’t think [campus culture] changed in terms of people being more open [in sharing dissenting opinions],” Ramsey said. “I think it’s just people are woken up a little bit that it’s been three years [of Crossroads], but it’s only been three years and that only so much change can happen in that time.”

Members of Crossroads felt more motivated to “push back” against the hate on the Freedom Wall, Ramsey said, and create a bigger space for the club on campus, but the club is limited in what it can do.

Crossroads, like all clubs at Pepperdine, falls under Pepperdine’s jurisdiction and must follow Pepp’s Christian message. This means that in order to follow Pepperdine rules, Crossroads cannot advocate for any change in school policy.

“Crossroads holds on to the firm belief of respecting Pepperdine policies and ethics and will not advocate for any change other than the inclusion of LGBTQ students,” according to the Crossroads constitution. “Crossroads is not a political club but instead a space for support and understanding.”

Ramsey said because of the wording of the Crossroads constitution and their bylaws, the club can only do so much.

“I think a lot of people have wanted us to host protests and to do stuff but we can’t because we cannot be an advocacy club,” Ramsey said. “That’s why we’re trying to host events where we can get conversations. Even though we can’t advocate we can create a space for people to advocate, so that’s the goal.”

For those interested in Crossroads, Ramsey said the club is a place for everyone, regardless of orientation, where people can build relationships. She said she would invite anyone with questions to talk to her or Crossroads Vice President David Kellogg. Those looking to be a part of Crossroads can stay updated on their Instagram, @peppcrossroads, or email Ramsey or Kellogg to join the Crossroads mailing list.

“We hope that people feel comfortable just being themselves, whatever that means,” Ramsey said. “Sexually, politically, religiously, we just hold that everyone deserves that have a space to be who they are, and that includes people who don’t agree with us. We can’t acknowledge you and respect you if we don’t know who you are.”