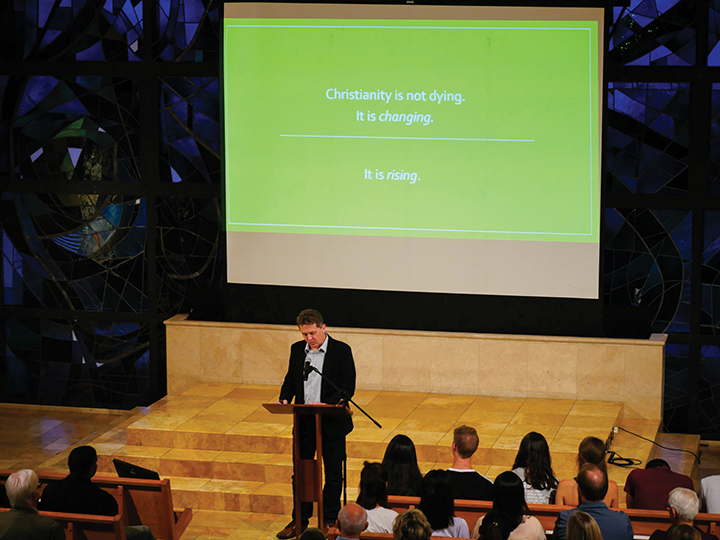 The William M. Green Distinguished Christian Scholar Lecture Program invites a Christian scholar to lecture on a topic of their choice to cultivate Christian scholarship and enhance each student’s individual spiritual journey as explained in the convo event’s program.

Since its initiation, 39 speakers participated in the program thus far. The namesake of the annual lecture program, William M. Green, was a professor of ancient Christian literature at Pepperdine who was instrumental in the launch of its M.A. program in Religion, among other accomplishments.

“The beauty of Global Christianity is that we now witness the fruits of those early Christian [missionaries,]” Daughrity said.

Daughrity said he remains hopeful about the Church’s future because of Global Christianity, or non-Western Christianity. The same powerful faith that propelled missionaries to board ships and leave their families is the cause of the “surprising rise of Christianity in recent past.” In fact, Daughrity explicitly said the reason the Church is not fading away is thanks to Global Christianity.

Dean of the Religion and Philosophy Division Daniel Rodriguez said throughout history, people have attempted to inhibit Christianity’s growth and even dampen the spirits of Christians. Most commonly, people make claims about the lack of intervention from God in times of pain.

Daughrity said the April 8, 1966 “Is God Dead?” Time Magazine cover is a perfect example of this phenomenon. As innumerable Americans gave their lives for their country, fought in the civil rights movement and continued to be oppressed due to their skin color, it was easy for people to question the existence of God if their beliefs were already weak.

Freshman Austin Zell said he was moved by the convo event.

“[It] presented an insightful and informative topic for mass discussion,” Zell said. “Christianity can present itself through many closed doors that will be eventually be opened through free thought and curious individuals.”

Daughrity initially spoke of the rising popularity of Christianity in “supposedly secular California.” After his 9-year-old daughter compared Saddleback Church in Lake Forest, California to Disneyland, Daughrity said he was positive that “without a doubt, Christianity is not dying.” Seeing this type of bustling church, with its multi-level children’s building, aquarium, rock climbing wall, live music and ice cream sundaes, only strengthened Daughrity’s faith in the future of Christianity.

Daughrity said the resurrection of Christianity is certainly not limited to the United States. India, a country once known as a “graveyard for missionaries,” now boasts the second largest congregation in the world, Calvary Temple Church, with over 225,000 members.

In China, Christians are “showing people around them how Christianity and China are extremely compatible.” Businessmen will attend weekly mass and even bring religion into the boardroom. In Eastern Europe, the Russian Orthodox Church is “enjoying a new wave of religious vitality,” with 200 new churches under construction.

Just as Pepperdine students’ school spirit rises as they cheer from the bleachers at a basketball game or put their heart and soul into their Frosh Follies skit, Daughrity said Christianity is “rising like a tidal wave.”