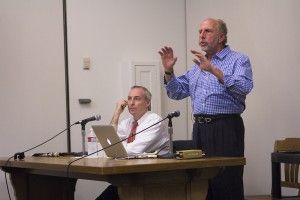 The two men offered the audience a glimpse of the media campaigns of each candidate, focusing solely on the 2012 presidential campaign ads of President Barack Obama and Gov. Mitt Romney. After giving their professional critiques on each campaign, the speakers opened the discussion to the audience in a Q&A.

Schnur, director of the Jesse M. Unruh Institute of Politics at USC, has worked on four presidential and three gubernatorial campaigns. He also served as the national director of communications for Sen. John McCain’s (R-Ariz.) presidential campaign in 2000. Ringe is an Emmy award winning media strategist and has worked as a political media consultant for nearly 45 years. Ronald Reagan and Bob Dole are included on his list of clients.

Countless political advertisements bombard the public during election season, and this year’s ads have been dominated with negative campaign rhetoric. Obama has failed to “stop cheaters” while Romney’s tax math “doesn’t add up.”

The men aired each opponent’s campaign ads and pointed out their respective strategies.

“Obama is trying to prevent you from gaining trust in Romney,” Schnur said. He wants voters to “know the real Mitt Romney.” On the other hand, Romney is running a retrospective campaign. He wants citizens to judge Obama based on his job performance since the last election, focusing specifically on the country’s economic woes. Romney wants voters to believe that “Obama just cannot do the job.”

According to the duo, married women decide elections and consequently, the debate fallout comes down to women.

“Romney wants women to think about their pocketbooks [the economy], and Obama wants them to think about social and cultural issues [reproductive rights]. Whoever wins that tug-of-war wins the election,” Schnur said.

Surprisingly, both men see political ads as being somewhat outdated. “The impact of paid political advertising, I think, is way overrated,” Ringe said. People today pay more attention to online news and debates versus these motivational rather than persuasive ads.

When questioned by an audience member on why politicians lie to their constituents, the men declared that only the voters can hold politicians accountable.

“Mendacity is the means of politics,” Ringe said.

In other words, “Lying is essential to telling the truth” in the political world.

Since the start, American politics have always been a messy, riotous affair. But the chaos of the democratic process has ever...
Copyright 2013 Jupiter Premium Magazine Theme
Back to top