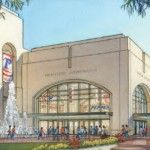 A conceptual view of the athletic center. Photo Courtesy of Pepperdine University.

Pepperdine University’s 400,000-square-foot Campus Life Project (CLP) was unanimously approved Thursday at the California Coastal Commission’s hearing in San Francisco. According to the CLP brochure, the expansion includes improvements envisioned and originally approved 20 years ago. Some highlights of the project include renovating undergraduate residence halls, creating new student recreation areas, a parking structure and a new athletics and events center.

“This project creates more green space and parking on campus. It moves campus events deeper into the campus and away from our neighbors. It improves outdoor campus lighting,” President Andrew Benton said in an interview with Malibu Patch.

New student gathering areas will be constructed, and Resident Directors will live within the new residence halls to mentor and supervise students. Keeping with the theme of community, a new visitor and welcome center will be created.

A parking structure will be constructed at the School of Law, adding 796 on-campus parking spaces. One of the existing parking lots will be transformed into a university quad to increase community interaction. Daily commuter traffic would be reduced by 744 trips, thereby easing rush hour congestion along Pacific Coast Highway and Malibu Canyon Road.

A quality athletics program is an essential part of the college experience. The Pepperdine Waves have amassed nine NCAA championships and 22 team and individual national champions during the past 30-plus years. The plans for new-and-improved athletic facilities are needed to assist with recruiting.

The new athletics and events center would be relocated from Firestone Fieldhouse to the interior of the campus in an effort to reduce noise and traffic. The existing 3,674 seats will be eliminated and instead, the gym will be used for student and community recreation. The new facility would have a seating capacity of 5,470.

Stotsenberg Track will be reconfigured to enlarge the soccer field and replace temporary seating. Similarly, Tari Frahm Rokus Field will be expanded for recreation and intramural sports.

Existing inefficient lighting will be replaced with state-of-the-art directed and shielded lighting. This athletic lighting technology will be the first of its kind in Southern California.

During the public hearing, no speakers opposed the project. However, the City of Malibu sent a letter to the Coastal Commission voicing concerns about how the new events center would impact traffic. Malibu City Council has no jurisdiction over the university because it is located outside the city limits.

CLP will create 2,000 jobs in Los Angeles County and provide $400 million in economic stimulus. The original long-term expansion plan was approved by LA County and the California Coastal Commission in the 1980s.

Since Pepperdine first opened its doors in 1972, teaching methods and the way a student absorbs the material has changed dramatically with technological advances. The advent of the digital culture has forced the university to evolve with the times. The CLP seeks to invest in the 21st century student by modernizing and upgrading student facilities.

If you think back to the last time you saw a sea otter during a beach outing, chances are you can’t remember it. And that’s...
Copyright 2018 Pepperdine Graphic
Back to top