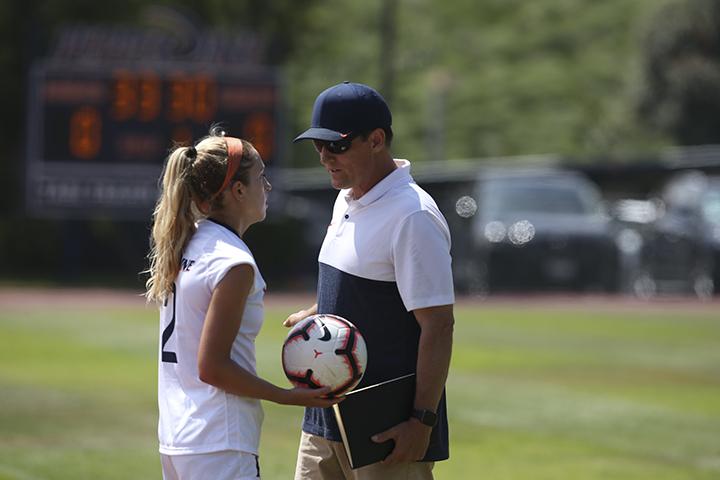 Women’s Soccer Head Coach Tim Ward instructs defender Erin Sinai during a game at Tari Frahm Rokus Field in 2019. Ward has built a successful soccer program with a winning culture on and off the field. Photo courtesy of Pepperdine Athletics

Throughout his tenure at Pepperdine, Coach Tim Ward has continued to build a successful program that has lasted over the past two decades.

Entering 2020 in his 27th season at Pepperdine and 23rd as the head coach, Ward has 18 winning seasons with 11 NCAA tournament berths, including three Sweet 16 berths, four WCC titles and five Coach of the Year honors.

This year is particularly uncommon for the NCAA and for college athletes because the fall championships will be moved to the spring.

With no competitions and limited in-person contact throughout the semester, Ward said he has had to adapt and learn new ways to coach and connect with his team.

“We have been holding weekly Zoom meetings, except the first week of school because we wanted them to get into the routine,” Ward said.

Ward said he has seen how Zoom can positively affect the way he coaches.

“Technology will play a role in our coaching going forward with film analysis,” Ward said. “We can connect with the girls late at night and do a film session for 15–20 minutes.”

“We have always felt that our teams go as our senior leadership goes,” Ward said. “We want to win games and championships. Over the course of a 20-game season, you usually get what you deserve.”

Joelle Anderson, a senior on the team, said the team culture Ward has established during her time here has been terrific.

“He has an amazing team culture, and I like how he brings faith into the team,” Anderson said. “He gives me a lot of hope and brings great positive energy to the team.”

Ward said he wants to make his student-athletes better both on and off the field.

The relationships Ward has developed with his student-athletes from their freshman year until their senior year is another building block that contributes to success. Calista Reyes, another senior on the team, said her relationship with Ward has been phenomenal.

“My relationship with him has helped shaped me into a different person,” Reyes said. “I have faced adversity, and he has helped me appreciate the lessons learned from the challenges put in front of me.”

Ward’s relationship-building, development of character and mission have allowed his team to stay near the top of the NCAA for the better part of his tenure.

“It’s our mission to live a life of constantly pursuing excellence, and that is a big part of what we do,” Ward said.

Ward said this fall he has encouraged his team to let go of the things they cannot control and focus on what they can.

“We cannot control when Los Angeles County lets us back on campus or what the NCAA does,” Ward said. “What we can control is our attitude, and rather than looking at it as a negative, we’re going to use this as an opportunity to grow and stay self-disciplined, focus on our school and family.”

There is no doubt that adversity has been prevalent over the last several months. Pepperdine student-athletes have had to deal with the Woolsey Fire, the Borderline Shooting and COVID-19 in a span of two years.

While the circumstances are bad, Ward said he has been able to find perspective in his life.

“I think my life has been a bit out of balance,” Ward said. “I have been able to reconnect with my family and my kids, and I do think it’s been a blessing.”

Ward said he hopes his student-athletes will be able to grow from these challenges.

“Life is not easy, but I think adversity reveals character, and when the game is on, the gamers come out,” Ward said. “Our team is full of gamers, and their character is strong physically, emotionally and spiritually.”

While it is disappointing Pepperdine athletics will have to wait a few more months to return, Ward said he understands everyone is in the same position.

“We know that other student-athletes have gone through this,” Ward said. “So many teams last spring were crushing it and didn’t get to finish out their seasons, so in light of that, I think our girls have a healthy perspective.” 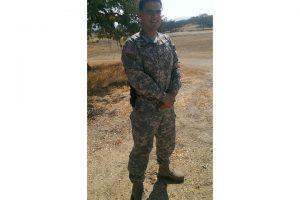