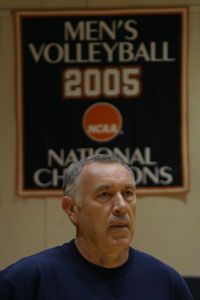 Just before practice Monday afternoon, Pepperdine men’s volleyball Head Coach Marv Dunphy sat down with the Graphic to discuss his hobbies and experience at the World Cup in Japan last winter.

Besides spending extensive time at volleyball competitions around the world, Dunphy expressed his enjoyment of the comfort of his own home and its surroundings.

Dunphy, admitting to an interest in  panning for gold, is hoping his team finds some of its own magic as it embarks on a new season with hopes of leaving behind memories of a national semifinal loss in last year’s NCAA Tournament.

What do you like doing when you’re not coaching?

“If it’s away from volleyball, we have five or six acres, and I really like to be on our land and just get my hands in the dirt. I kind of tracked 58 oak trees. When we got to the property in the 80s there was one oak tree. That tree has spawned lots of others. We have some avocado trees, white nectarines, and fruit trees.

I like developing the property, not so much the house. My wife wants to go to Europe and run around, but I just want to get outside. But I guess my hobby is watching, analyzing, and thinking about coaching and what works for different coaches. I like studying coaching.”

What’s something people would be surprised to know about you?

“A hobby that I’ve had for years but haven’t been able to do lately is pan for gold. Anywhere along Highway 49, and I’ve actually done it up into Wyoming and a little bit in Montana also.”

Is there any coach you look to for inspiration?

“The coach I admire the most is John Wooden because I’ve spent some time with him, and he’s the best ever. But to answer your question, I think it’s really important to be yourself. You can learn from others but if you try to be somebody else it just doesn’t work.”

What’s your favorite aspect of coaching?

“I like it all. Somebody once asked me if I wasn’t coaching what I would be doing, and I still don’t have an answer. I just can’t imagine what I’d be, a policeman, fireman, a politician, flipping hamburgers, I don’t know. I really like the practice environment as much as anything, but I like the matches too.”

How was your experience at the World Cup in Japan?

“It was awesome but brutal because we didn’t qualify, but we have since qualified. We qualified last Saturday. The U.S. men will have a team at the Olympic Games.

Every World Cup is in Japan. Japan is good for volleyball. They’ve hosted that tournament forever. It’s a great environment for volleyball – the facilities, the preparation, the television, it’s fabulous for our sport. Everybody thinks you just go to the Olympics, but you have to qualify. It’s pretty tough to get there.

It’s one thing to go to the Olympics, but the key is to be good when you get there. We lost to the Russians the last night to finish in fourth when the top three teams qualified. It’s an absolute honor to go to the Olympics. It’s a little bit bigger picture, it’s the USA.”

Since you weren’t coaching Team USA, what was your role at the World Cup?

“I’m basically a spy. There’s four or five people on staff and I think my title was Team Leader. But pretty much I was on the endline with a headset because the endline is the best place to watch the match from. All the video we have is from the endline and I’ll probably be on the endline at the Olympics as well.”

How do you think the United States will perform at the Olympics, and what will be your role there?

“Sean Rooney, former Pepperdine player, played for the first time in zone competition and helped them qualify. I think with him in there we’re a bigger, and potentially, a better team, and we could be a factor. You never know how things are going to go but I’m pretty excited.

If I can be helpful, I think the plan right now is to take the old guy along and see what happens.”