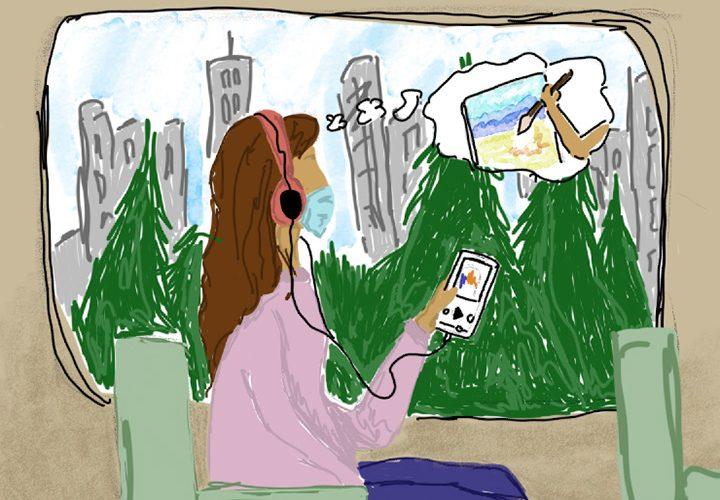 Correction: The first episode of the Centered on the Arts podcast debuted June 29 and featured Center for the Arts staff members. This was incorrectly reported in the original version of this story.

The “Centered on the Arts” podcast originally came to fruition when COVID-19 started affecting Pepperdine, said R.J. Morgan, the events coordinator and administrative assistant for Pepperdine’s Center for the Arts. It features a wide array of art mediums and their creators to foster a greater sense of community during the online semester. 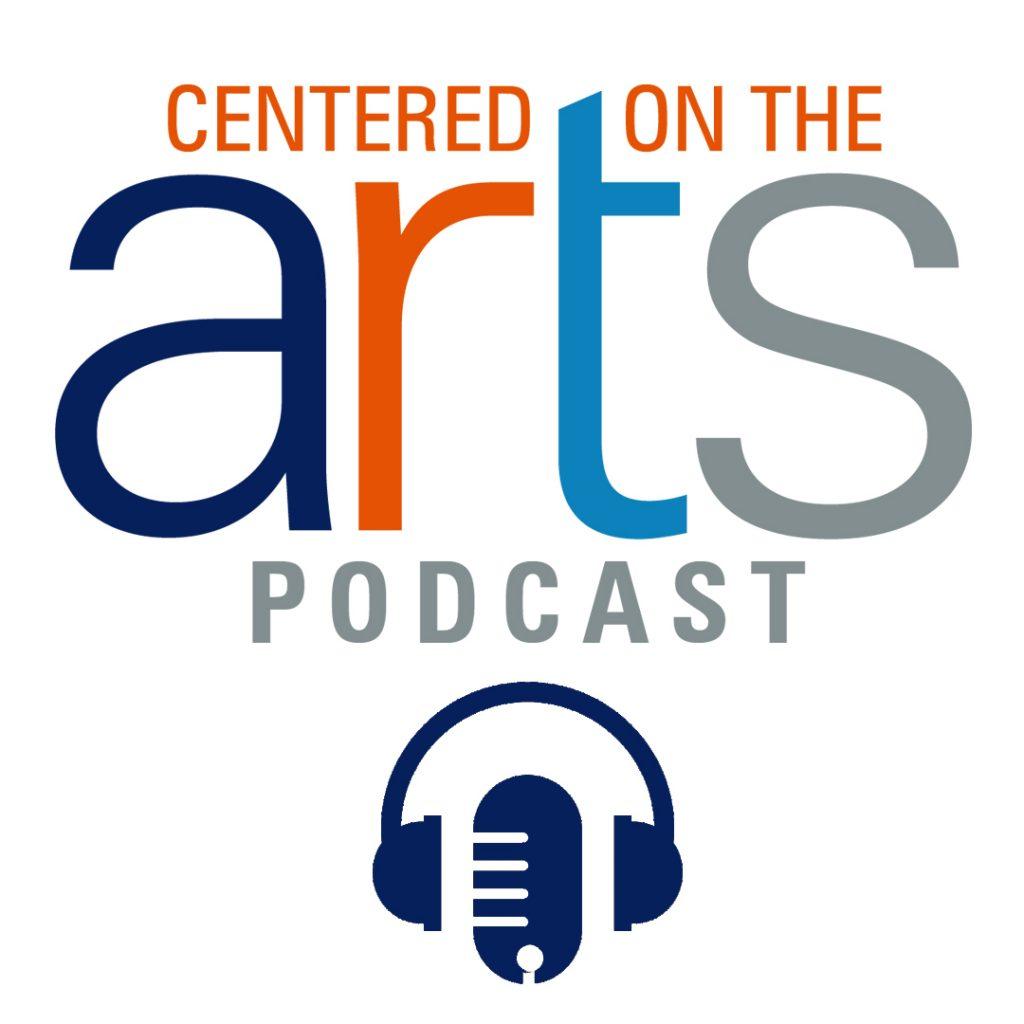 The Centered on the Arts Podcast social media logo shows Pepperdine colors, a microphone, and headphone. The Lisa Smith Wengler Center for the Arts used the logo as promotional material for the podcast. Photo Courtesy of RJ Morgan

Morgan said he first came up with the idea for the podcast in a Zoom meeting, but didn’t mention anything to his team until a few days later in an email to Rebecca Carson, managing director of the Center for the Arts.

“It’s a way to connect with each other,” Morgan said. “It just lets our people know that, ‘Hey, even though we can’t physically have you here, we’re still here for you.'”

Carson said COVID-19 has impacted the arts at Pepperdine, cancelation of their spring 2020 performances, and preventing any museum exhibitions or live performances, which has been devastating for students and faculty. The podcast started as an effort to bridge that gap and connect with patrons.

“The podcast is part of our ongoing digital initiatives to create ways to continue to engage with our patrons and the Pepperdine community and to show them that the arts are important,” said Tyler Flynn, marketing and publicity manager for the Center for the Arts. “Even though we’re not meeting in person, we’re still being creative and still coming up with interesting and unique content like we would for our mobile season.”

Morgan said the podcast includes a behind-the-scenes look at the arts, both within the Pepperdine community and the professional art world. It explores the production side of the arts to provide education on what the whole process entails.

“Now you get to have the sit-down chat with the person and actually get to hear how things came to be,” Morgan said. “So you get a little more in-depth understanding.”

Dani Lobello, director of production for the Center for the Arts, said the center’s plans were to use the podcast as both an engaging informational resource and a promotional tool for all types of art production.

Carson said she gives full credit to Morgan as the primary creator of the podcast. It was his idea, and he works regularly with the production of it. Senior Mary Buffaloe also assists in the editing process.

“We just really wanted to make sure everything was being well rounded and we were getting not just the top number of things of what people think of as art but every aspect,” Flynn said.

Flynn said every podcast episode is different in content, but each episode is framed around the person being interviewed. The subject matter the artist works with also plays into the content of the show.

Flynn said the podcast hosts a variety of professional and student guests. A recent episode featured the theater production of “Polar Bears, Black Boys & Prairie Fringed Orchids,” where the host spoke with students, Jada Henry and KJ Powell as well as Nic Few, professor of theatre, acting and directing, to discuss the production.

“We discussed common themes in the play — racism, homosexuality and how to have a conversation about that,” junior student action KJ Powell said. “Even if you don’t agree on certain topics, you still need to find commonalities and be able to respect the other person’s opinion.”

Powell said his interview experience on the podcast was positive. He was able to discuss the challenges of putting on a performance virtually and the message of the importance of communication in the play itself. 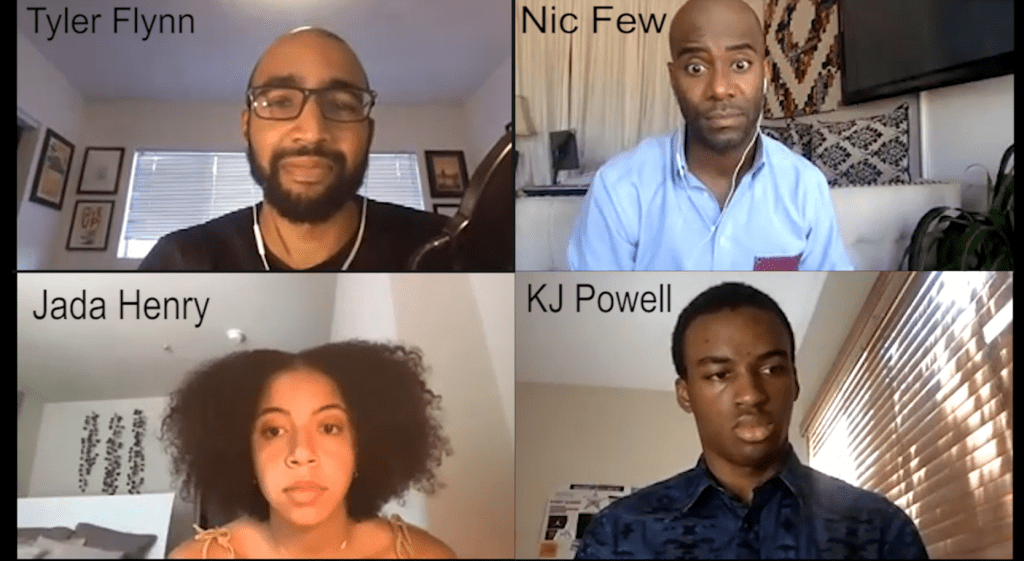 First-year Garrett Podgorski was also a guest on the podcast. He said he was able to talk about how he became a musician, his path to Pepperdine and his future goals.

“I started electric guitar when I was 9 years old,” Podgorski said. “I did a show called the ‘Randi Rhodes’ show where I performed in front of about 5000 people with a bunch of rockstar legends. I also wrote my first instrumental heavy metal album when I was 13 called ‘Limitless.'”

Lobello said she interviewed Rebecca Carson for her hosting episode. The first episodes gave the staff an opportunity to introduce themselves, so hosting duties would not always fall on Morgan.

Lobello said the rotating schedule of podcast hosts allows for a lot of variable content. The different hosts often have their own take on interviews, which makes each show unique.

“In the future, we might have students host,” Lobello said. “Some of our student workers would absolutely be able to do it. I know that we are doing an alumni month where I am interviewing former students, so you never know.”

Flynn said the podcast’s audience is continually growing and has now reached international listeners. He said it’s been an overall positive experience creating the podcast.

“We’ve always kind of wanted to have our own original content and show the community like, ‘Hey we’re here. We exist, we’re doing cool and interesting things on campus,'” Flynn said.

Flynn and Lobello said they hope the podcast will help spread the word about upcoming shows and presentations. The staff of the Center for the Arts pride themselves on creating a helpful working environment where everyone is always willing to help each other, which Morgan said helped make the podcast a reality.

“Doing a podcast is not the same as doing a live production, but it does help remind us why we do this, and just talking to artists has been so exciting too,” Carson said.

Carson said she hopes the podcast will be a source of light and joy in listeners’ lives during the COVID-19 restrictions.

“When I’m having a hard day, one of the things that’s always a motivator for me is music — just listening to great music,” Carson said. “And so I think we all understand that on some base level that just being involved with the arts and exposing yourself to the arts as a way to sort of lift you up.”

Morgan said they highlight the importance of the arts throughout the podcast. The podcast episodes are released biweekly and are easily accessible across multiple platforms.

“The podcast helps remind us of this and just ways that we can all think about engaging in the arts in a small way in our day-to-day lives,” Carson said.

Opinion: The World Needs to Respond to the Earth's Fire Alarms 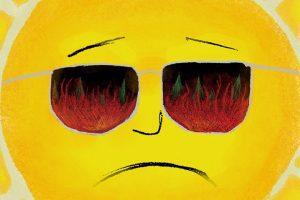 Opinion: The World Needs to Respond to the Earth's Fire Alarms

Art by Gabby DiGiovanniThis past wildfire season, the fires began in August and have already decimated at least 3% of California’s...
Copyright 2013 Jupiter Premium Magazine Theme
Back to top