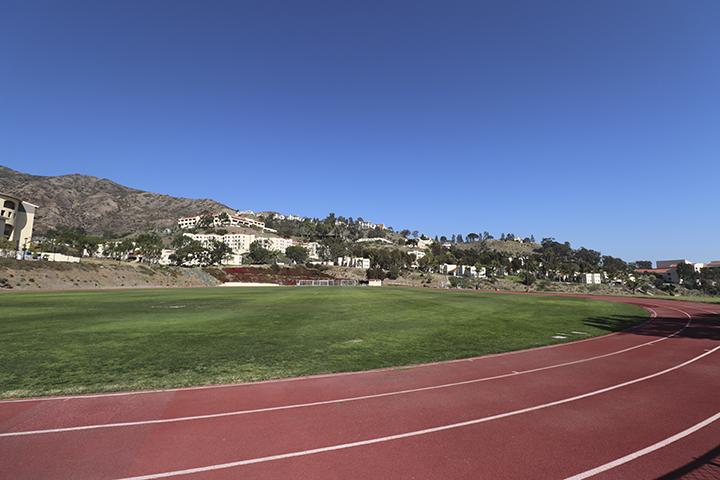 The view from the track at Tari Frahm Rokus Field overlooks the Pacific Ocean on Pepperdine University’s campus Feb. 24. As the University partially lifts COVID-19 restrictions on campus, campus recreation has opened up for both athletes and students.

While Pepperdine’s recent reopening measures have been good news for students who have been waiting for nearly a year to set foot on campus, the news drew mixed reactions from athletes who have been using campus to quarantine and compete.

For student-athletes, the opening of large areas of campus to the entire student population cuts down on areas they can go. Since NCAA competition resumed in late November, athletes have been under a strict lockdown, only coming on campus to practice or lift weights.

With the threat of one positive test having the potential to derail a season for weeks at a time, athletes often avoid non-teammate friends and family while off-campus. This total separation will continue after the latest reopening measures that opened libraries and study spaces.

“We are following LA County guidelines and keeping our Student Athletes separated from the Pepperdine Student population while using library spaces,” wrote Assistant Director of Athletics Kevin Wright in an email to student-athletes Tuesday, Feb. 23.

Per the email, student-athletes are the only group that can use the Drescher library, and will not have access to Payson or other main campus buildings.

“To keep the team COVID-free, it’s a sacrifice that’s worth being made,” junior swimmer Pia Anderson said.

The severe COVID-19 protocols extend to games as well, as athletes are prohibited from sitting next to each other. Because these restrictions remain in place, the idea that everyday students can now mingle in Payson and main campus doesn’t sit well with some athletes.

“It’s a little hypocritical that our team gets tested frequently, but now all of [a] sudden any student can come onto campus using the ‘green dot?'” wrote an anonymous source in a text message to the Graphic. “The green dot doesn’t prove anything because the answers people put down don’t require any evidence of being safe/healthy. But those of us who get tested and have proof of health aren’t allowed to be together?”

“They pay for us to come to Pepperdine and, for whatever reason, they aren’t allowed to come watch the games,” Mahony said. “But regular students, who are higher risk to health and safety, are allowed to come onto campus. That doesn’t make much sense at all.”

Some athletes welcome the addition of more people to campus.

“I love the hustle and bustle of Pepperdine,” Anderson said. “I’m looking forward to seeing some familiar faces that aren’t on my team.”

With swimming being a lower-contact sport than many others on campus, Anderson said their coaches told them to stay away from large gatherings of non-athletes, but essentially are just trusting the swimmers to be smart.

“We have been really fortunate to have not had any positive COVID-19 tests as a team this entire season,” Anderson said. “I think our coaches take that into account and know that we will continue to do what we’ve been doing to keep that trend going.”

Still, another athlete who texted the Graphic described the fear of being “blamed” for ruining the season if they were the one to test positive, especially if the athlete felt they were adhering to protocol.

While Anderson said she had a “positive view” of other Pepperdine students and didn’t know of anyone who was being unsafe, she acknowledged the extra pressure that athletes are under.

Anderson said a separate email that told athletes they “have an image and a duty to uphold” as representatives of Pepperdine but she believes that standard applies to other students.

“I think students are really grateful to have the opportunity to be on campus,” Anderson said. “Athlete or not, I think everyone who is able to return will uphold their image and their duty to the school as well.”