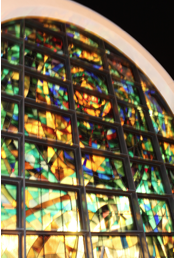 The Pepperdine-affiliated University Church of Christ runs Campus Ministry, whereas Malibu Presbyterian Church operates University Ministries. The two groups work alongside Pepperdine’s own university chaplain to minister to students, but they differ in denominational ties and worship style, such as instrumental versus a capella worship.

“It’s kind of like flavors of ice cream,” Thomas Fitzpatrick, minister for Campus Ministry said. “If it were all vanilla, you wouldn’t appreciate the vanilla.”

Along with co-minister Linda Truschke, Fitzpatrick described himself as a minister of the University Church who strives to be a missionary in the school.

University Ministries director David Pommer said he feels the same in his role.

“Thomas is one of the only other people in the world who knows what it’s like to be a campus minister at Pepperdine University,” Pommer said. “I think it has been a gift for both of us [to work together].”

The pair said they have fostered a friendship over the years and that competition between the two groups is minimal.

“I can name a ton of similarities,” Fitzpatrick said. “We’re trying to bring people to the Lord, and we’re trying to strengthen people who are in the Lord. We want to prepare people to meet God.”

Fitzpatrick did note, however, that the two groups cater to different demographics. With different denominational ties, Pommer said, worship style is an important distinction between the two. For example, Pommer said Campus Ministry and the Churches of Christ tend to rely on a capella worship.

“My sense is that the University Church and Campus Ministry provide a culture that is more familiar for people in the Church of Christ tradition,” Pommer said. “Our ministry doesn’t intentionally try to be distinct from it, but I think it is distinct by virtue of the fact that many of our students don’t come from the Church of Christ.”

Junior Hayley Presthus said she is a member of the Servant Leadership Team at University Ministries but is involved in Campus Ministry events as well.

“I think they cater to different types of students,” Presthus said. “I know a lot of kids who love University Ministries but aren’t comfortable at Campus Ministry and vice versa. They just have two different flavors going on, but I think they complement each other well, and I think this campus definitely needs both of them.

“Malibu Pres. has been in Malibu for 60 years, so it’s established in the community,” Pommer said. “My understanding is that there was a Bible study for college students at the church for years, but sometime in the mid-90s leadership in the church decided it was important to intentionally minister to college students.”

Fitzpatrick said before the addition of University Ministries and Convocation, Campus Ministry was “the only game in town if you wanted to do something spiritual.”

University Chaplain Dave Lemley, along with a small staff, leads another ministry program which tries to “contribute to the Christian atmosphere” on campus. Pepperdine, and not an individual church, supports the chaplain position, Lemley said.

“My role related to university spiritual life and co-curricular programming is unique in being assigned and supported by the university,” Lemley said. “I have the opportunity to collaborate with other departments and resources of the university to develop programs and events that become part of our institutional identity.”

Lemley said some of the most important roles of the chaplain include grief counseling and providing on-site assistance to Christians and non-Christians alike.

“In pastoral care, my primary goal is to provide a reminder of God’s presence and care to someone in a difficult transition,” Lemley said. “I then discern what university resources might be helpful in their situation — Counseling Center, Academic Advising, Human Resources — and try to make those connections.”

Lemley said the sheer presence of a chaplain who serves the entire student body is vital for the success of a Christian community.

“Many people describe chaplaincy as a ‘ministry of presence,’” Lemley said. “Christian community and spiritual formation need to be grounded in the church, but in a multi-denominational institution, a chaplain can have a unique ministry to people coming from various religious experiences.”

Senior Zack Reed, a Campus Ministry intern, said he agrees that all campus ministry programs attempt to bring students closer to God, but he chose Campus Ministry because of his heritage in the Churches of Christ.

“We are about meeting people where they are and bringing them closer to the cross,” Reed said. “We create a space for them to experience God on a new level by creating a deep community of believers.

“From the beginning of freshman year I got plugged right in and fell in love with the family and community,” Reed continued.

Fitzpatrick said that while Campus Ministry, University Ministries and the Chaplain’s Office are by far the largest on-campus ministry outreach programs, there are several smaller student-led groups such as Adorn, the Catholic Students Association, Asian Christian Ministry and Celebration Chapel — a worship service that provides students with Convocation credit held in Stauffer Chapel every Friday at 10 a.m.

Softening his gaze, Fitzpatrick described why he got into campus ministry in the first place.

Yes, as in being a damsel in distress. Pocket that incredulity — I’m not about to set the progress of feminism back...
Copyright 2013 Jupiter Premium Magazine Theme
Back to top