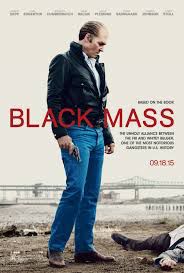 Johnny Depp’s career has been in a state of flux for a little over a decade. While his reputation has been built on the successes of films such as “Edward Scissorhands,” the “Pirates of the Caribbean” franchise and the original “A Nightmare on Elm Street,” flops such as “The Lone Ranger,” “Dark Shadows” and “Mortdecai” have hurt him considerably.

With the release of “Black Mass,” does this performance mark a dramatic comeback for the eccentric A-lister?

The answer is yes. Yes, it does.

Scott Copper (“Out of the Furnace”) directs, while writing duties are carried out by first-timer Mark Mallouk (one of the producers of Ron Howard’s “Rush”) and veteran Jez Butterworth (“Edge of Tomorrow”). This biopic about the infamous Boston crime lord James “Whitey” Bulger needs to be seen to be believed. Supporting cast members include Joel Edgerton, Kevin Bacon, Benedict Cumberbatch, Peter Sarsgaard and Corey Stoll.

Based on the book by Dick Lehr and Gerard O’Neill, “Black Mass: The True Story of an Unholy Alliance Between the FBI and the Irish Mob,” the film follows Bulger’s bloody rise through the ‘70s and ‘80s. His nearly two-decade-long manipulation of the FBI is chronicled in the film, as he works with an agent who grew up with him in crime-ridden South Boston. The story culminates with Bulger’s eventual downfall in the early 1990s.

This is Depp’s film, and the filmmakers know it. He portrays the character as a charismatic man who inspires loyalty in his followers. However, eventually, his true nature is revealed, and he becomes a cold-blooded, psychotic individual capable of horrendous acts of violence if given the slightest suspicion that something is wrong. Some of his crimes are even committed in broad daylight in front of other people. At one point, his mental instability is implied to be an aftereffect of several LSD experiments, for which he volunteered while in prison in both Leavenworth and Alcatraz. While he is able to express regular emotions around others, there is always a sense of dread in his interactions. The audience does not know what he is thinking, making it difficult to gauge whether he will kill the person with whom he is talking. Even his presence is enough to unnerve others.

Sharing the screen with Bulger is Joel Edgerton portraying corrupt FBI agent John Connolly, who grew up with Bulger and his state-senator brother, played by Cumberbatch. Wanting to protect his hero and advance his career, Connolly initially employs Bulger to spy on the Italian mafia. While this is beneficial in the beginning, Bulger gradually builds his empire, using his friendship with Connolly as protection. Their relationship exposes the strong sense of loyalty and corrupted Irish-Catholic traditions, on which the title of the film plays (a funeral mass).

The film suffers slightly from an uneven pace and a feeling of flatness in some parts. This could be attributed to a lack of full disclosure of Bulger’s story, the generic format used to tell the tale or the odd editing choices that leave certain characters either underdeveloped or left in the metapohrical lurch.

In a few recent interviews with major news outlets, Bulger’s lawyer and some former associates have criticized the film for its unrealistic take on the titular character. They also accuse the filmmakers of downplaying the extent of the corruption in the FBI when it authorized the alliance with Bulger. Regardless, “Black Mass” serves as a great return for Depp and is worth seeing just for the performances of everyone involved.

The film was released Sept. 18 and is playing nationwide.