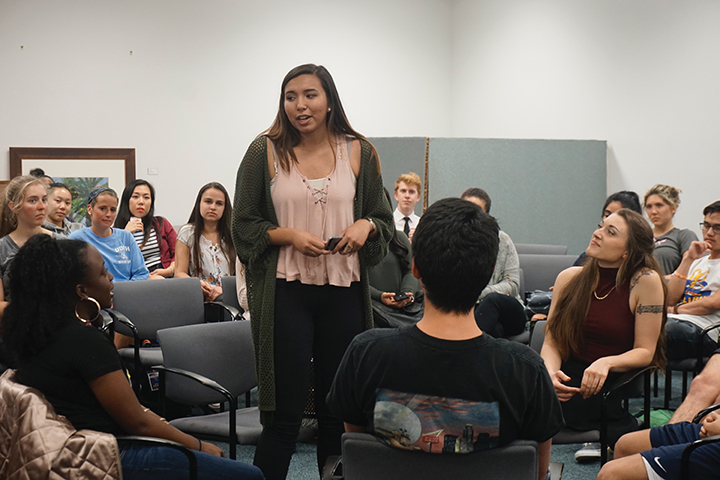 A panel of students spoke about the inaccurate stereotype of Pepperdine students as surf-centered, tall blondes at a convocation event titled He Said, She Said on March 23.

“We wanted to start off with something that the entire campus experiences or can try to relate to,” Ordaz said. “There are just so many topics that we want to address with the Beloved Community Intiative process that mostly have to do with social engagements and things like diversity, things like race or immigration or gender. Everyone experiences gender in some way and, therefore, we wanted to have this space where we could explore that and think critically about what gender looks like specifically on Pepperdine campus.”

The student panel was made up of senior Lionel Ong, senior Mallorie Urban, junior Moises Barba and senior Rahje Branch. Ordaz moderated the discussion, posing questions to the panelists. Each panelist came from different racial, religious and geographical backgrounds, bringing their personal viewpoints and beliefs to the dialogue. 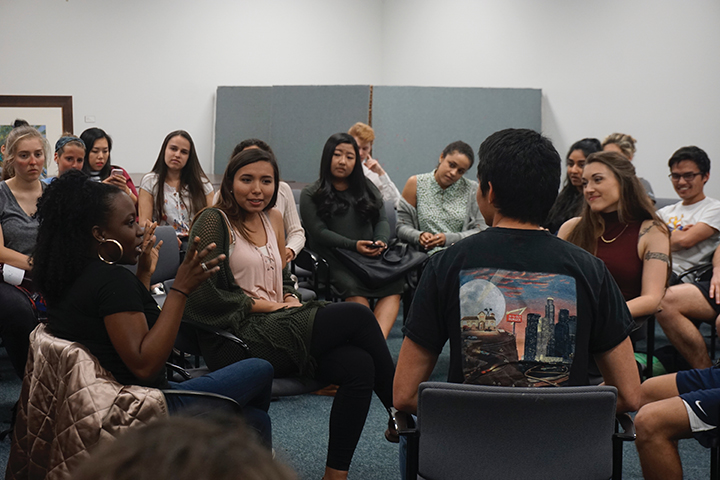 In the conversation, the panelists analyzed what they saw was the typical Pepperdine man and woman and whether they thought they fit into that description, going along with the Beloved Community Intiative’s emphasis on discussing belonging on campus.

“I think that it’s important to talk about gender roles and I think it’s especially [important] on our campus,” Adams said. “I think these are important things to address. I feel like a lot of things were very broad, but then again, I guess, you can really only get so specific in a big group.”

The panelists also highlighted how one’s perception of social issues on Pepperdine’s campus can differ based on how and where one grew up. Urban, who said she grew up in a traditional Church of Christ household, said she found Pepperdine progressive, but mentioned others have considered Pepperdine to be the opposite because of the liberal areas they came from.

“I think having conversations, like this one, about gender or about any kind of issues, is so important and that’s why I was a part of the Beloved Community Initiative to begin with,” Urban said. “That’s why I am so involved in it. I wanted to just offer my insights on these issues and just encourage people to engage in these kinds of conversations and even outside of this kind of context.” 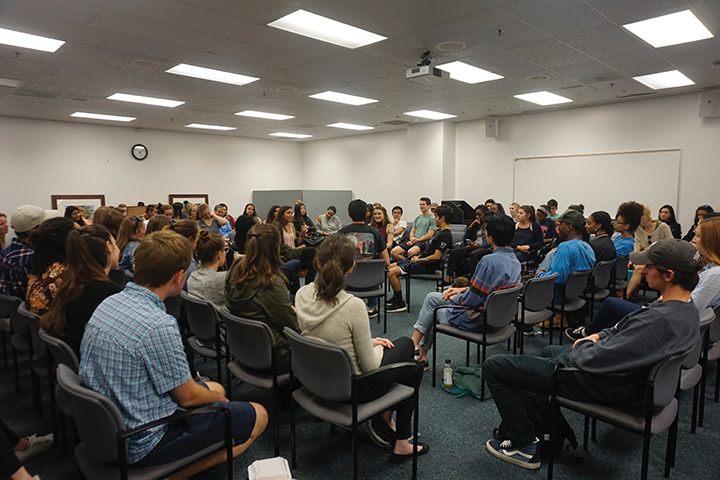 The group brought up their views on interracial dating at Pepperdine and how common an occurrence it is. Branch said that while black men typically will date whoever they want, black women get less attention from men of any race.

In discussions on diversity and race on campus, Branch said she wanted to see Pepperdine recruiting more diverse people, domestically, to their campus, as only about five percent of Pepperdine is made up of people of color.

In the conversation on different races at Pepperdine, Ong said how it felt to be an international student from Singapore at Pepperdine, citing the struggles to learn American ways and fitting in with Pepperdine’s culture.

The group also covered how a Church of Christ environment can lead to more restrictions on women and an environment where it takes longer to get more women filling traditionally-male roles in the university.

Barba said a Women and Film course at Pepperdine was what pushed him to analyze his relationship with his mother. His mother was the primary parent who raised him while his father was at work, something which he said he grew to appreciate after taking the film course.

Other topics mentioned in the talk included inclusion of all types of sexual orientations, perception of rape on campus, and possible connections between sexual assault and the taboo nature of sex at Pepperdine.

The discussion was entirely student-led, with no teachers or administration making up the panel or organizing the conversation.

“I think that a lot of times, students tune out when administration starts talking about gender or you know, rape even or things that we talked about tonight,” Urban said. “Having people who are a part of the student body, rather than associated with the institution, I think helps reach people and helps people to be more receptive to the message.”