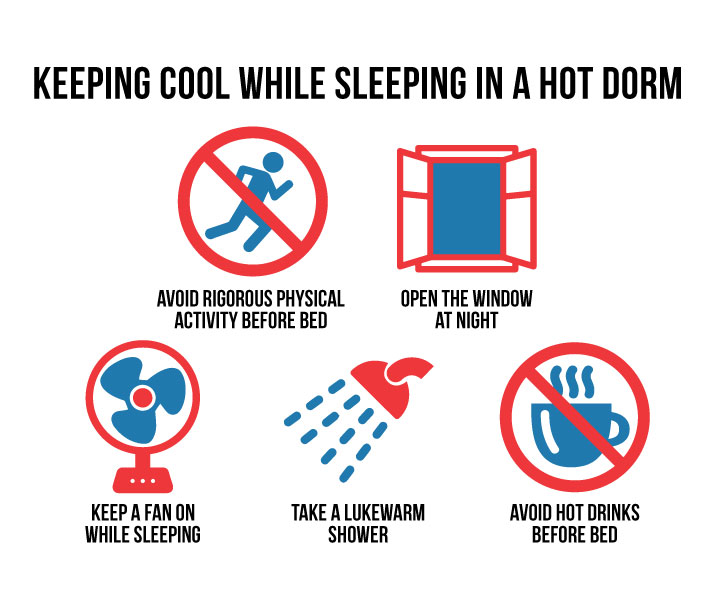 August and September are the hottest months of the year on average in Malibu, according to ABC 7’s AccuWeather. As students adjust to a new school year, mitigating the heat in their dorms is another part of their to-do lists.

Temperatures in Malibu have already peaked this semester at 93 degrees Fahrenheit on Labor Day. Students continually bemoan the fact that on-campus housing lacks air conditioning (AC). The university has replied that installing air conditioning in the dorms isn’t feasible because of substantial logistical and financial pitfalls.

Sophomore Lindsay Hack lives on campus. Hack said she has had trouble falling asleep in the last week due to the heat.

“I was a [2019] spring admit,” Hack said. “I never experienced the summer/fall semester at Pepperdine, and I was not prepared to experience this intense heat.”

Hack recounted her failed efforts to cool down her room.

“Opening the windows at night is either too loud with students walking around, sprinklers going off or garbage trucks rumbling,” Hack said, “but if I close them, the heat from the lack of airflow is super uncomfortable.”

Maddie Boccardi, a senior from Colorado, recalled a similar experience from her freshman year.

“I remember it hit 100 [degrees Fahrenheit] one week, which was a huge change for me, especially the humidity,” Boccardi said. “My roommate and I tried everything: opening windows, blasting fans, sleeping naked, but nothing helped. The fans would just blow out hot air.”

“Last year the freshman dorms were so hot that it wasn’t even comfortable enough to study or relax,” Zeigler said.

Roy Raymann, vice president of sleep science and scientific affairs at SleepScore Labs, said there is a biological basis for students struggling to sleep in hot dorms. Raymann worked with Apple on their sleep-related features such as “Nightshift,” “Bedtime,” and “HealthKit,” for the iPhone. He is also a specialist in the interaction between sleep and temperature and holds a doctorate in life sciences.

However, this process is disrupted during heat waves. When the room temperature is too hot, you can no longer get rid of that heat through your lungs, so the body tries to get rid of it via the skin, making you sweaty and uncomfortable.

“This has a significant negative impact on the quality as well as the duration of your sleep,” Raymann said.

Sleep loss can be detrimental for students in particular because both physical performance and academic performance decline as a result. What students should be most concerned about, Raymann said, is that sleep deprivation can affect one’s ability to retain what they are studying.

“Memory consolidation takes place during the night; if you don’t get enough sleep, then your short term memory from a night of studying will not translate into long term memory,” he added.

“To put air conditioning [in the dorms] would be a huge expense,” Gore said. “Students would then have to pick up that expense with the room rate. So in order to keep rates low, the university really thinks about what design features they can cut in order to keep our buildings top-of-the-line, yet affordable for students.”

Pepperdine’s newest housing addition, Seaside Hall, does not have air conditioning. When university officials were planning Seaside, they discussed central air conditioning, Gore said. However, they opted for a plan to construct the building in such a way that it would cool naturally.

“They looked at natural wind patterns that come over the mountains and from the ocean and positioned Seaside so that it would catch both of those winds,” Gore said. “There are air vents at the bottom and top of the rooms; it’s similar to how old farmhouses or old houses were created to draw warm air out and cool air in: it creates a natural flow, natural air conditioning.”

Drescher’s W-Block is the only dorm on campus equipped with air conditioning.

“W-Block was outfitted with air conditioning when it was part of the Graziadio hotel,” Gore said. “We use those spaces for students with a special accommodation for AC.”

When the 31 spaces run out, Housing will place students elsewhere and install AC if necessary.

However, students without an accommodation who install air conditioning in their dorm are subject to fines. Despite popular belief, this policy is not a result of fire code, but rather an issue of electricity. Gore said air conditioners use more amps than the older halls are equipped for.

“For the most part, the temperature is very moderate,” Gore said. “It will go from about 65 [for the lows] to 75 [for the highs]. So you really don’t need air conditioning for most of the year.”

Gore acknowledged that there are one or two weeks out of the year where the dorms can get uncomfortably hot.

“People are uncomfortable when it gets really warm. But we have spaces on campus that students can go: the HAWC, the library,” Gore said. “There’s some great spaces if it does get too warm, and usually by night time it has cooled down significantly.”

For students who have trouble sleeping at night due to the heat, Roy Raymann had a few recommendations to optimize sleep during heat waves.

First, he recommends not engaging in any kind of rigorous physical activity, as it raises your core body temperature. He also recommends not drinking hot drinks at this time for the same reason.

“What actually works is taking a lukewarm shower,” Raymann said. “Not a cold one, because what will happen is that your blood vessels in your skin constrict, and your body actually keeps more of the heat in your body. Try taking a shower that is comfortably cool for 10 minutes before you go to bed.”

Barring an extensive (and expensive) alteration of campus housing, implementing Raymann’s tips — along with using air fans and opening one’s window at night — is the best strategy for longer and higher quality sleep during the hottest time of the year.