Avicii in SaMo: The Review 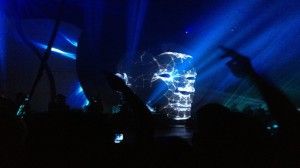 Tim Bergling, aka Avicii, has a reputation for knowing how to entertain a crowd. His 2012 performance at the Santa Monica Civic Auditorium Sept. 14-16 did just that.

The stoic replica of a larger-than-life human head 22-year-old Swedish house producer Avicii stands on top of while performing has become somewhat iconic of his style. Some people say it’s creepy because of its lack of expression, but most would argue that’s it’s awesome, giving the audience something to look at for the entire two-three hours of his performance.  And, it replicates what most people feel while experiencing his music—a larger than life sense of euphoria and complete absorption into the tricks well-done techno music play on the human mind. It’s symbolic in more ways than one.

To read the rest of the article click here.

I’m here at Leo Carrillo State Park in Malibu. At first glance, it may seem like just another “Day at the Beach.”...
Copyright 2018 Pepperdine Graphic
Back to top