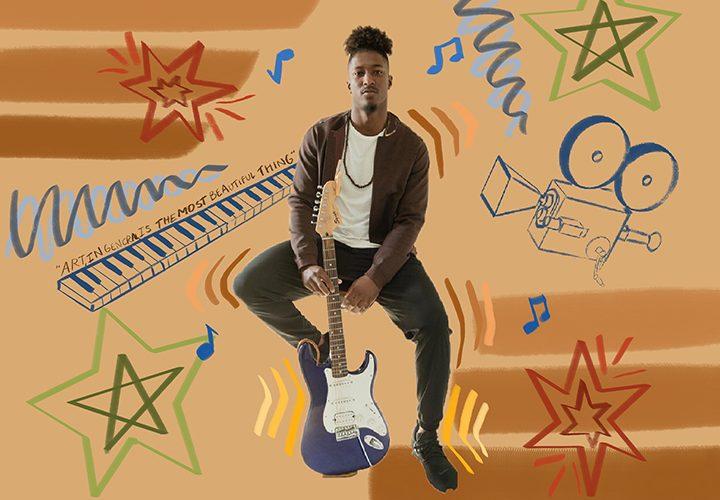 “Art, in general, is the most beautiful thing ever,” senior Valentine Douglas said.

Douglas is a singer, pianist, guitarist and filmmaker. In pursuit of the ability to expand his mind, he chose to study Film Studies at Pepperdine.

“Storytelling is the pinnacle of our society — it’s about stretching the imagination and changing people’s minds about what’s possible,” Douglas said.

When Douglas first came to Pepperdine, he planned to pursue a career as a baseball player. During his sophomore year, he stopped playing baseball, which gave him the opportunity to build on his passion for music.

Originally, he wanted to take Pepperdine’s introductory piano class, but there were not enough spots available. Instead of accepting defeat and moving on to a different dream, he purchased the class textbook. With the help of a friend, he taught himself how to play in the Sandbar.

“Once I figured out the basics of it, I started writing songs,” Douglas said. “I found it really exciting that just three chords can make a really incredible song — if you really work at it.”

Campus Ministry gave Douglas his first opportunity to showcase his talents. Performing at events like Celebration Chapel made Douglas fall in love with music, he said.

Outside of ministry, Douglas performed at Coffeehouses, Pacific Sounds Festival and other events for the Board. Douglas said he wishes there were more opportunities for instruments and musicians on campus.

“Outside of the worship space, it’s been hard for myself and students who aren’t spiritually driven to have opportunities to pursue music on campus,” Douglas said. 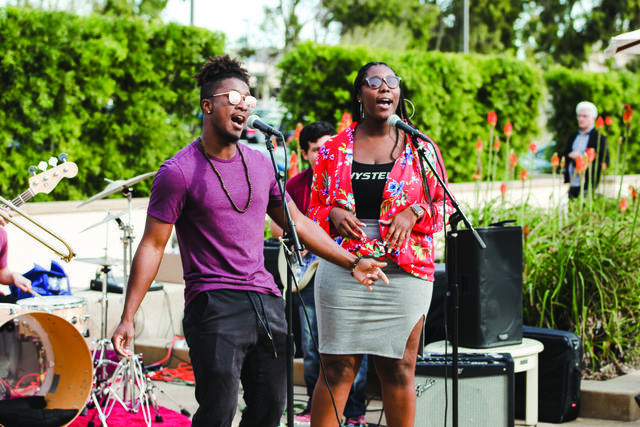 Senior musician Valentine Douglas (left) performs between sessions of Pepperdine TEDx Jan. 30. Douglas led a student band in a myriad of popular covers outside Smothers Theatre while a collection of on- and off-campus organizations provided snacks and booths for event-goers.

To Douglas, music is about connection. He described it as one of the few ways to break down barriers, take a person outside of themselves and become grounded in a moment.

Douglas said honesty stands out to Douglas as the most important factor in art. Above all, he said he hopes his pursuit of music will create moments of truth for people.

“Art is about speaking truth into people’s lives, not about making a profit,” Douglas said. “Art that is not truthful — it can be hurtful.”

“American entertainment is rooted in the destruction of Black bodies and Hollywood does not own that truth,” Douglas said. “Because of this, the way Hollywood portrays heroes and love is biased.”

After Douglas graduates, he said he would like to make the industry a more honest place.

“The plan is to create as much content as possible, and enjoy the freedom of that,” Douglas said. “I think I really want to focus in on my craft as a musician and as a songwriter, and allow that to take me where it takes me.”

Douglas said he believes his ability to make truthful and powerful art will connect him to the right people. 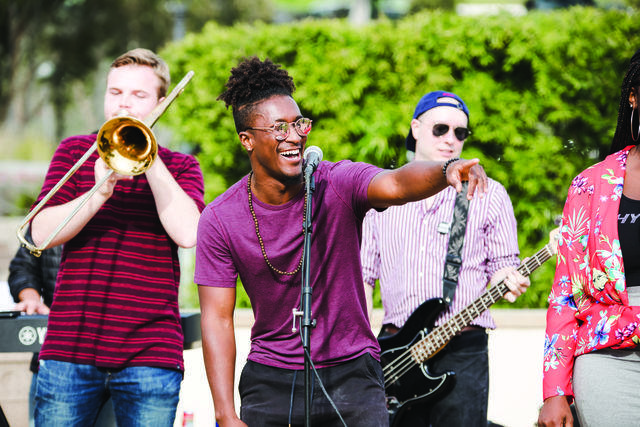 Douglas dances along with audience members while performing a cover of Harry Styles’ “Watermelon Sugar.”

Douglas’ advice to students curious about art is simple.

“Just write a song!” Douglas said. “Or grab your phone and make an iMovie.”

Douglas said there is no shame in starting small: Art can be whatever the artist wants it to be — it does not have to be successful in order to be beautiful.

After his songwriting debut at a Coffeehouse on campus, Douglas said he felt proud, excited and motivated. He attributes those feelings as driving factors that keep him creating content and urging others to do the same. 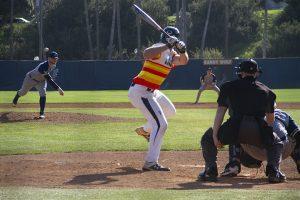