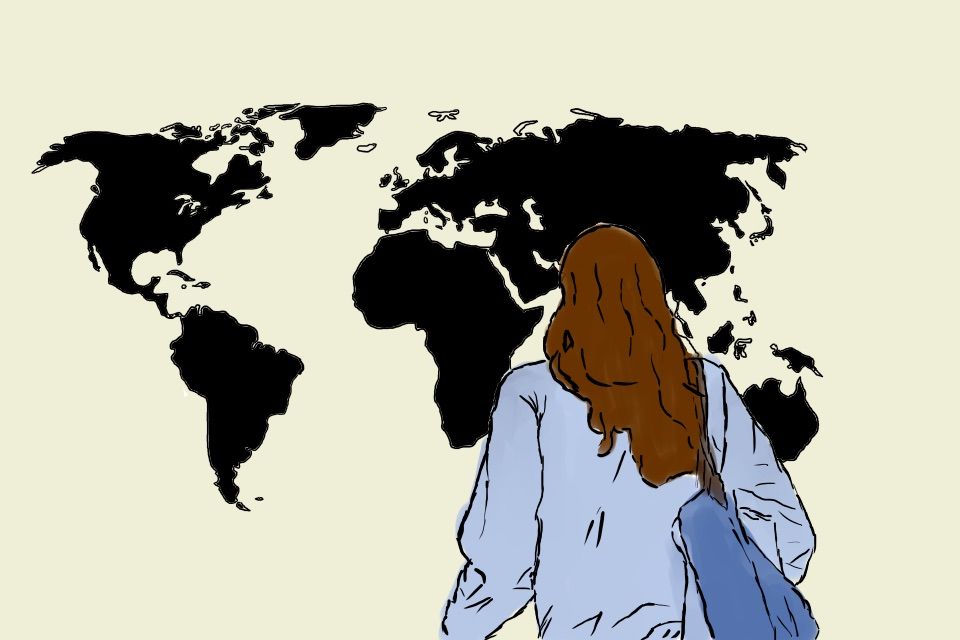 My dad went to Israel for his first time this year, while on a layover in London, he sent me a text telling about how the airport’s Starbucks sells wine and beer.

I’m still not sure if that was a warning from him, telling me to keep my cool while ordering drinks from a London Starbucks, or if it was his way of expressing how little things like Starbucks are different around the world.

Whether it was a warning or not, it was still news to me that Starbucks wasn’t just a place to get my usual green tea latte while exploring London and beyond.

Spontaneous information like that isn’t rare when discussing going abroad with others, but one topic that seems to come up often with others, especially with my dad’s family, is safety. In my case, safety with regard to the elevated presence of anti-Semitism in Europe.

When I was applying to programs abroad, safety in the country I’d be living in was an issue clouded by the excitement of travel, culture, exploration and any other exciting adjective or verb you can correlate with studying in a foreign country.

But safety having to do with my dad’s religion wasn’t something I thought I needed to consider this day and age until he kept bringing it to my attention.

While on his trip to the Promised Land, my dad bought me a gold necklace that says “Rachel” in Hebrew. When he gave it to me, he told me he didn’t want me to wear it while I was abroad in London. He told me he thought it could make me a target, as if it were a sign around my neck that read “I’m Jewish!”

Being Jewish on Long Island is like eating SunLife before going to Zuma; it’s normal, and no one really questions it. In fact, according to the 2010 census data, Jews make up about 12 percent of Long Island’s total population, compared to the United States’ average of 1.7 percent. Those figures don’t include the estimated number of Jews who don’t report their religion in their census data, which is estimated at about 20 percent.

Being half-Jewish for me has never made me any different from everyone else, and I’ve never felt threatened or endangered because of it. When my dad first brought his concerns to my attention, I thought he was nuts. Actually, I thought he was being overdramatic.

He sent me links to an article that described a neo-Nazi march in central London. Thinking this march might just be a one-time fluke, I did more research. I came across more information about an incident regarding disturbing, negative remarks about Jews written on elementary school property. The Jerusalem Post on July 4 reported an incident in which two cars parked outside a London synagogue were vandalized, possibly with an axe or hammer.

These are just a handful of examples that have occurred as recently as July. We all know what we learned from our high school textbooks about violence against Jews in Europe in the past, such as the anti-Jewish pogroms in Russia or the Holocaust. It’s no secret the Jewish community has been targeted before.

But, sadly, history tends to repeat itself. According to an article from BBC News on Feb. 15, Copenhagen police in Denmark killed a gunman who allegedly attacked two separate venues, a free speech debate and Copenhagen’s main synagogue, leaving two dead and many police officers injured.

Israeli Prime Minister Benjamin Netanyahu made a statement addressed to his cabinet in a meeting after the shootings, saying, “Again, Jews were murdered on European soil just because they were Jews,” CBS News reported. “This wave of attacks is expected to continue, as well as murderous anti-Semitic attacks. Jews deserve security in every country, but we say to our Jewish brothers and sisters, Israel is your home.”

While the Jewish community is being encouraged to leave Europe for safety and acceptance by the Israeli Prime Minister, I will be entering the continent, and I will do so with caution and confidence in knowing the dangers that surround me.

Sadly, we can’t all have neo-Nazi hunters for parents like Sue Sylvester from “Glee.” I’m well aware that anti-Semitism is still very much alive, but I refuse to let that get in the way of the amazing opportunity I’ve been given to see the world. I plan to leave my “Rachel” necklace at home, like my father asked me to, but I’ll maintain my faith that the people of London aren’t all anti-Semites, as some articles report them to be.