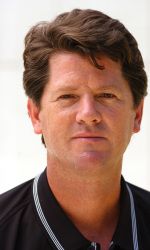 Jeff Stork is known and well-respected by the Pepperdine athletic community having played as a Wave on the men’s volleyball team from 1982-84 and later being inducted in the Pepperdine Athletic Hall of Fame.

On Saturday, Oct. 20 in Holyoke Mass., he added one more thing to his list of achievements, as he was inducted into the Volleyball Hall of Fame in their 27th induction ceremony.

Men’s volleyball Head Coach Marv Dunphy who was inducted into the Volleyball Hall of Fame in 1994, presented him with the honor.

A quick glance of Stork’s career as an athlete explains his selection. During his time at Pepperdine, he was picked three times for first team All-American honors and helped lead the team to a pair of NCAA championship runner-up finishes. After leaving Pepperdine Stork played for the U.S. National Team for 10 years and played in three Olympics, winning both a gold and bronze medal. For one of his Olympic appearances (1988) Stork played as the starting setter under Dunphy who spoke highly of Stork as a player and as a person.

“What all the other Olympians said [about Jeff] is that they never played with a better teammate than Jeff,” Dunphy said. “He was solid in every way as a player and as a person. You didn’t have to inject life or volleyball into him. He had a vision of where he wanted to be.”

After his Olympic appearances, Stork won an indoor volleyball title while playing professionally in Italy in 1990. He went on to be named the Italian League MVP in 1993.

Stork left Pepperdine to become the women’s head volleyball coach at Cal State Northridge in 2002. He was recently named Big West Coach of the Year in 2011.

For a video of Hall of Fame Inductees, click here.