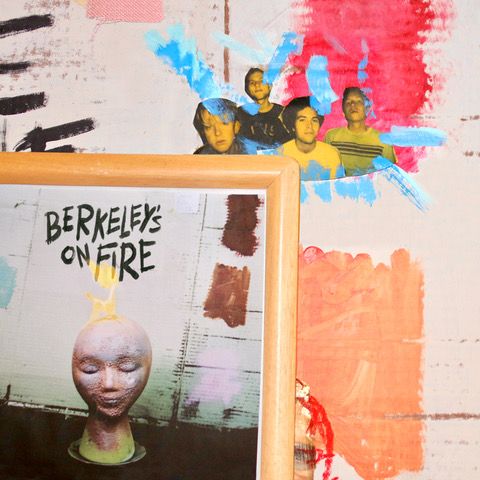 Punk rock has presumably taken the back seat of the music industry as icons of hip-hop and pop music continue to sit at the top of the charts. Neo-punk band SWMRS is single-handedly reviving the teenage angst scene with a message that will not be forgotten.

Following the release of their 2016 album, “Drive North,” which highlights softer teen angst lyrical narratives, the Oakland-native band has shifted gears to deliver the answer to this generation’s cry for social justice with its newest album, “Berkeley’s On Fire.”

Comprised of brothers Cole and Max Becker, Seb Mueller and Joey Armstrong, the members instantly set the tone for their sophomore album with the first song. Their most politically charged album yet kicks off with the album’s title track. It draws inspiration from the 2017 Berkeley protests that broke out due to political differences between the public and politically conservative groups.

The protests stemmed after a controversial appearance from conservative commentator Ben Shapiro captured the attention of UC Berkeley students. The lyrics touch upon several details like when the groups were “confusing this freedom speech with swastikas,” co-frontman Cole Becker notes in the song.

“It’s a strange time to be young; our generation knows the duality of feeling like an unstoppable force for change in one moment and a powerless wreck in the next,” Becker revealed to Upset Magazine. “We wanted these songs to document that feeling that we’ve observed closely in ourselves and in the people we’ve shared our music with over the past three years.”

The Oakland boys instantly grab our attention by the first guitar riff of the track “Too Much Coffee” which presents itself as a more indie approach to punk rock. While this track does not specifically relate to the idea of protesting, it reminds us to not drink too much coffee before breakfast with its sugar-coated beats and trivial undertones.

The 10-track album also features popular singles “Trashbag Baby” and “April In Houston.” Both capture the jagged edges of angst in punk music, which the band created as a social protest. Nevertheless, SWMRS keeps up this chain of protesting political continuity through its sonically driven tracks “Lose Lose Lose” and “Hellboy.”

Being from California, the band has found a harmonious balance between surf rock and punk rock on this record. With its gritty undertones and soft beach sunsets combined into one production, SWMRS brings you across Southern California from Downtown Los Angeles to Malibu on “Berkeley’s On Fire.”

This record may not have a direct answer to the social and political points discussed throughout the album, but one thing for sure is that SWMRS is starting to get us thinking about the future.