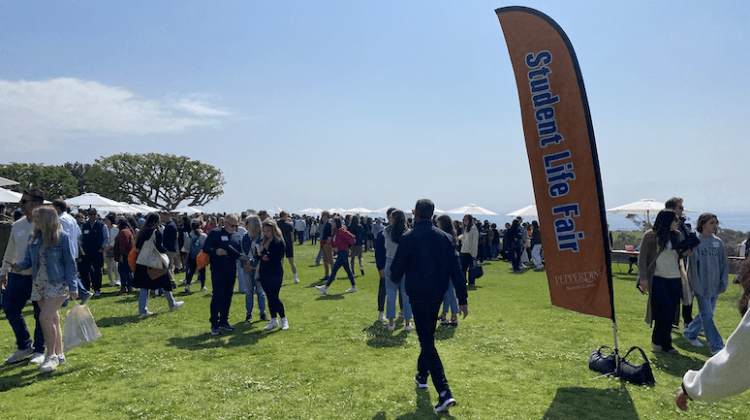 Pepperdine kicked off its annual Malibu Reception on April 1, welcoming over 600 admitted students and their families to the Malibu campus.

Admissions Counselor Michael Rodriguez said the event took over almost the entirety of main campus and Alumni Park. Before the opening ceremony, Pepperdine hosted specialized receptions for admitted Regents’ Scholars and Church of Christ students at the Brock House and Chancellor’s House, respectively.

“I think the most important thing is actually getting to meet people that are part of the community current students, staff members, faculty members, all sorts of people,” Rodriguez said. “I think getting that sense of community, I really think it helps them decide whether or not Pepperdine is right for them.”

After attending an opening ceremony and Celebration Chapel, admitted students could meet with Housing and Residence Life, professors, club leaders and student volunteers who tabled in Mullin Town Square and on Alumni Park.

Admitted student Landyn Phillips said she has several friends who attend Pepperdine. Phillips has grown up in the Churches of Christ, and was present for the reception for Churches of Christ students earlier in the day, and said she enjoyed the event.

“It was really good,” Phillips said. “I learned a lot about the community and the how they implement Church of Christ values into the school.”

Haema Phoo, an admitted transfer student from Gardena, Calif., said Pepperdine is one of her top three schools, and her experience at the reception cemented her love for the school.

“Although I’m not Christian, I feel I’m so welcome,” Phoo said. “And then Pepperdine emailed me that they can consider my application. So I’m so happy for that.”

Alex Goldberg, an admitted student from Chatsworth, Calif., said while she hadn’t decided for certain, she was pretty positive she wanted to attend Pepperdine. At the Malibu Reception, Goldberg said she met with professors and was exposed to the Great Books and Screen Arts programs.

Zander Nichols and Scarlett Fletcher are both admitted students from Clovis, Calif., and are members of the same Southern Baptist Church. Nichols said he decided to enroll at Malibu Reception.

“Honestly out of the colleges I visited, this has been my favorite,” Nichols said. “I love the faith aspect for sure. I love the location, obviously it’s beautiful and just kind of the the general vibe from the school’s awesome.”

Fletcher, however, said she was using the information she gained at the reception to help her decide.

“I’m a very skeptical person,” Fletcher said. “So I have to like measure up my choices, and then I’ll see.”

Don Thompson, director of the Great Books program, said most questions he encountered from students while tabling centered around their ability to take Great Books.

“Unfortunately, there are rumors about that sometimes and we have to stamp them out that no, you can do International Programs, you can major in anything,” Thompson said. “Occasionally they’ll want to know the size of the class, what kind of mix is there in a class, but for many it’s a new experience.”

Teacher Education Professor Carrie Wall, said while tabling, her goal was to explain the ways professors connect with students — such as helping students formulate a four-year plan or inviting them over for breakfast to their homes.

“They can actually meet faculty members and see that we’re not there to just build their intellect but care about them as whole individuals, and they get to talk to us and hear we are passionate about our discipline and exhibit interest in them as people,” Wall said.

Lucy Man, communication and marketing manager for Housing Operations, said students asked where they will be living, what the suite comes with and how the meal-point system works.

The two-year residency requirement, Man said, is another subject admitted students had a lot of questions on at Malibu Reception.

“It’s a lot easier and friendlier to you know, be face-to-face instead of just over email. And they have so many questions,” Man said. “It’s like a constant stream of questions coming into these events like this.”

“I am volunteering because I really like being one of the first faces people meet at Pepperdine,” Sandine said. “They get an idea that the person genuinely wants them to be here and is a welcoming and inviting presence, they feel like they might be able to belong here.”.

“I have been telling everybody here that there is actually so many opportunities for students and so many things for students to take advantage of,” Galacgac said. “And I think once as a student, if you just put yourself out there and and seek those opportunities, then you find that student life is just so much more enriched and fulfilling.”