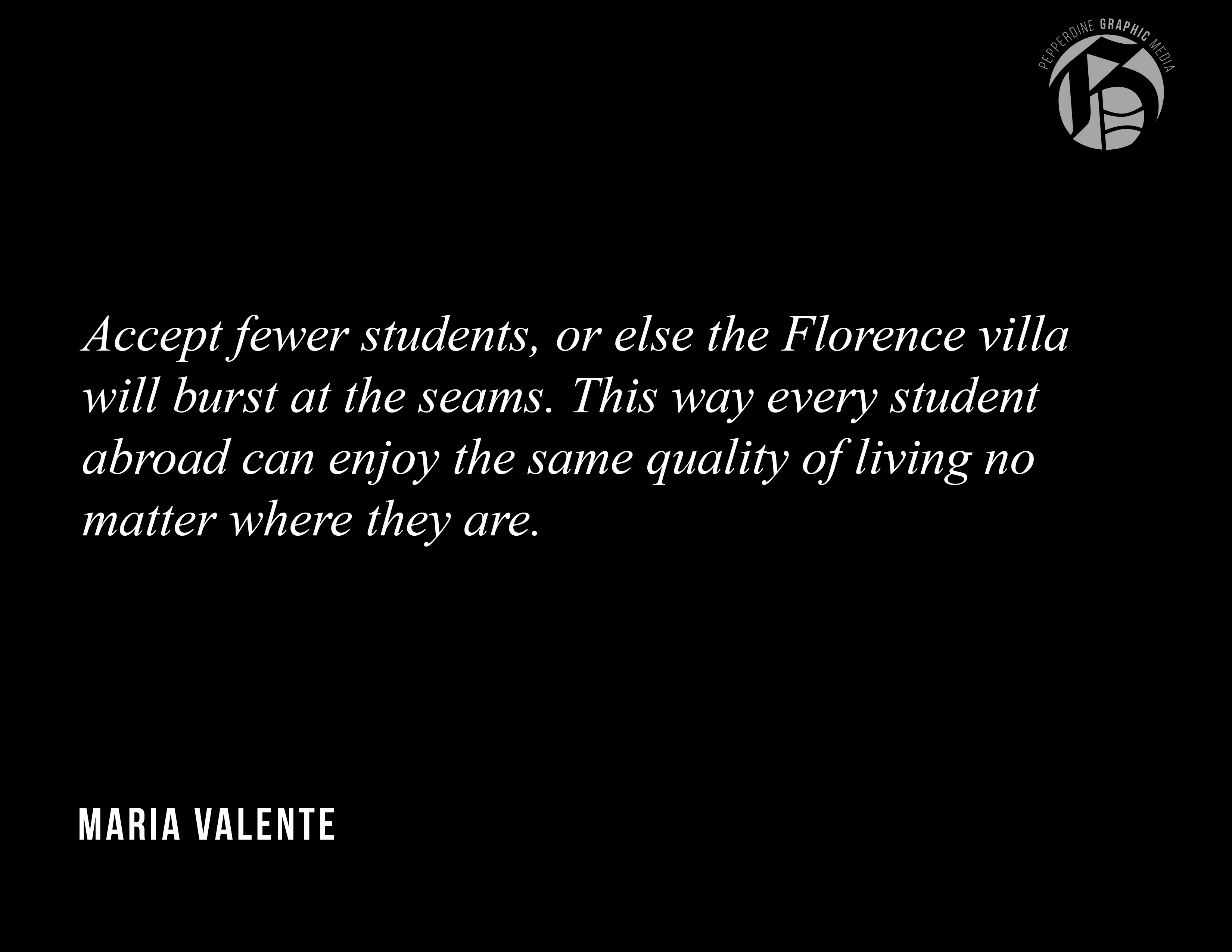 Studying abroad is one of the most momentous experiences of most students at Pepperdine. Naturally, not everyone’s experiences are the same. One factor students don’t often think about is the quality of living spaces in any one of the seven locations, which can vary significantly.

I am studying abroad in Florence, Italy. Many will tell you how “homey” the Florence house is: On every wall are murals or pictures left by the classes of prior years, and even the plates we eat off of and the cups we drink out of were painted by former students. Sure, the bedrooms are a little cramped, with four people in a room originally meant for two or three, three in rooms meant for two, and the double rooms the size of closets. But it’s not just the villa. Everyone abroad has it like this, right?

I’ve been abroad since September and have visited the houses in Heidelberg and London during my travels. Heidelberg, the university’s oldest international program, underwent a $5 million renovation this past year, and couldn’t look more pristine. The rooms were large and furnished with modern taste.

London impressed me even more, even though their $4 million renovation happened in 2008. The students’ rooms were huge; double the size of those in the Florence house. I couldn’t believe the absolute difference in the quality of accommodations between the Florence villa and these houses.

The Florence villa is truly homey, but almost to an extreme extent. Students who live in quads are living right on top of one another, and have little space to keep their things, even if they only brought one piece of luggage. This close proximity, which makes for dirty cracks and corners and people’s things stacked on top of one another, leaves a significantly less-than-pristine impression that the Heidelberg or London house gives.

Charles Hall, dean of International Programs, wrote in an email that the Florence villa underwent a major renovation five years ago and another will not be expected for many years. Additionally, Elizabeth Whatley, program director in Florence, said that there may not be many changes that could be made to the property anyway.

Purchased by Pepperdine in 1995, the Florence villa used to be a hotel. The close proximity to its neighbors and the building’s infrastructure make it nearly impossible to expand to make more room for the students.

The only solution to the overcrowded villa would be to accept fewer students into the program. This way, students could enjoy the same space and quality of accommodations that students in London and Heidelberg evidently have.

While the next program that is scheduled for renovation is Lausanne (as per Hall’s email), my request to the IP offices is to think about making the Florence program a more exclusive one. Accept fewer students, or else the Florence villa will burst at the seams. This way every student abroad can enjoy the same quality of living no matter where they are.