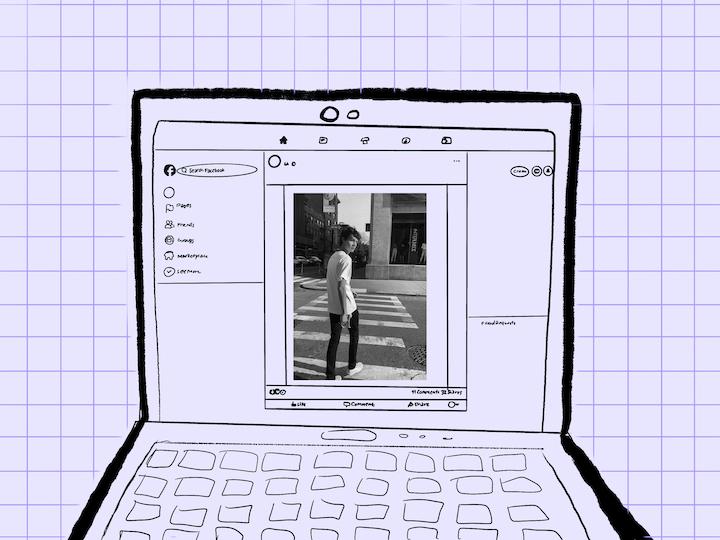 These messaging symbols and acronyms have infiltrated their way into the human experience and the relationships humans hold.

LOL signifies humor, <3 signifies love, OMG represents shock and g2g means ‘got to go’. Even facial expressions can now be exchanged online with emojis, representing a smile, a kiss or even a hug.

But do virtual XOXOs feel the same as real ones?

“Face-to-face is to be able to enjoy and savor the moment together,” Public Relations Professor Klive Oh said.

While computer–mediated communication breaks through the barriers of time and space, it also removes natural parts of human interaction including facial reactions, body language and physical closeness.

Oh said he believes that there is a special element to in-person interaction.

“I don’t think it can be replicated in any way,” Oh said. “It has to do with all five senses and you’re seeing how the other person reacts [and] behaves — their attitude’s right there, making eye contact, things like that.”

Senior Casey Tice limits his interactions via social media because he enjoys more in-person moments with other people.

“I cherish getting to know people and gaining intelligence based off of their past experiences that they portray to me,” Tice said.

Shared experiences are also one of the reasons that face–to–face interactions are more meaningful than interactions on social media, sophomore Geoffrey Leong said. One person is able to invite another into a private world — rather than continuing to exist on two separate screens.

Connected to family and friends (👨‍👩‍👧‍👦)

Oh uses his social media accounts to keep in touch with his more distant relatives.

“My parents live in Korea and they’re on some social media platforms,” Oh said. “I get to check on what they’re doing, [and] they can see what I’m doing very quickly and very easily.”

Social media platforms remove the need for postcards or letters to inform far-away friends and family of everyday life.

Instagram is one of these large platforms for engaging with photos of other people; the mission of the company is “bringing you closer to the people and things you love.”

“There’s that instant access and the reaction of, ‘Oh, if I want to see how this person is doing and living thousands of miles away, I can see how they’re doing,’“ Oh said.

Senior Annie Little said she tried to explain Snapchat — a visual instant message app that has garnered a millennial and Generation Z following — to her grandma.

“I was having a really hard time because I was like, [Snapchat] is really for no reason,” Little said.

She told her grandmother that she mainly uses the app to share funny memories with friends in a faster fashion rather than sending a text. Most famous for its streaks, the app features photos that can be clicked through in a 10-second time frame.

Similar to Oh, Tice said he uses Snapchat to stay connected with friends. However, he does not find the 15- to 30-second videos or selfies he sends his friends as meaningful as their face-to-face interactions.

“The downside of mediated communication is the lack of genuine feelings,” Tice said. “Having someone or something in between you and your communicating partner results in a less honest result.”

Another disadvantage of social media for Oh is how fast the messages are sent and received. He believes that the instant speed creates shorter attention spans.

“[This] could get in the way of building and sustaining meaningful relationships from time to time,” Oh said.

Oh also uses his social media accounts to stay updated with the trends of his students. He mainly uses Instagram and YouTube.

“I make it a rule to check out some trending TikTok content as well,” Oh said. “I know that they’re watching those and as a person who teaches and studies social media, I want to make sure that I’m keeping up with the trend.”

As apps like TikTok become more popular, teachers are starting to create educational content on the app to appeal to students.

In addition to keeping up with his students, Oh stays active on social media because his job now requires an advanced technical and digital skill set.

Oh teaches his online classes via Zoom and does not believe that the app comes close to replicating a classroom environment. He said Zoom takes away the ability to read his students’ body language.

Some companies require employees to be active on social media, like various modeling agencies.

Leong is represented by a modeling agency and uses his personal Instagram to market himself and his modeling.

“I’ll put up photos and it’s basically like a portfolio of sorts,” Leong said. “And if anybody’s looking to book me for a job, they just go on there and they can see what I look like.”

Leong formats all of his posts around various themes in order to attract potential job offers.

“The advice I was given is just follow like other models in the agency who you think have a similar style to what you would like to emulate or what you think like suits your personality,” Leong said. “And then you can kind of just mimic their feed, maybe some of the colors that they tend to use or you could even practice some of the angles that like they’re modeling in and you just resemble that and you put it up on your feed.”

“It used to be a place where I could project my personality a little bit more,” Leong said. “While I do justify it in the sense of it’s serious because of work and all that, every now and then I try and get my personality in there.”

The social struggle for likes, follows and ‘friends’ (👍)

Across the most popular social media apps, the infamous ‘like’ and ‘follow’ — or in some cases ‘add friend’ — options have sparked serious and troublesome conversations about what the status of these features mean in people’s daily lives.

After Little decided she wanted to unfollow some people with whom she does not keep in touch anymore, one friend reached out and questioned whether or not the two were still real-world friends.

“It was interesting to see how people reacted and to understand my own relationship with social media and other people’s and how other people give it so much power where for me, it’s just a simple platform to share experiences in my life,” Little said.

The popular app Facebook allows you to ‘unfriend’ or ‘take a break’ from accounts.

“I think as a society we’ve created this expectation that unless you’ve had a falling out or unless something negative has happened between the two of you, you would just still keep following each other on Instagram,” Little said.

Leong expressed similar frustrations with his social media, especially with how individuals portray themselves in images.

“I see a big problem with [social media], especially in Instagram and in that everybody’s life on there is just picture perfect,” Leong said. “And nobody’s life is like that. And if you’re exposed to that for long enough, you can start getting like a false sense of reality.”

Leong also said he believes social media can create pressure to do the things that everyone else is doing; It can cause a lonely feeling or become overwhelming.

Oh explained the pressure through the concept of self-construal.

“[Self-construal] is how you define yourself by how you believe others are seeing you,” Oh said.

“I thought that was really interesting how we’ve created — or I guess morphed — this positive, encouragement thing into a comparison thing, because of our insecurities,” Little said.

Little said she thinks communication through social media should be reserved for more casual conversations and people should save the more confrontational conversations for in-person.