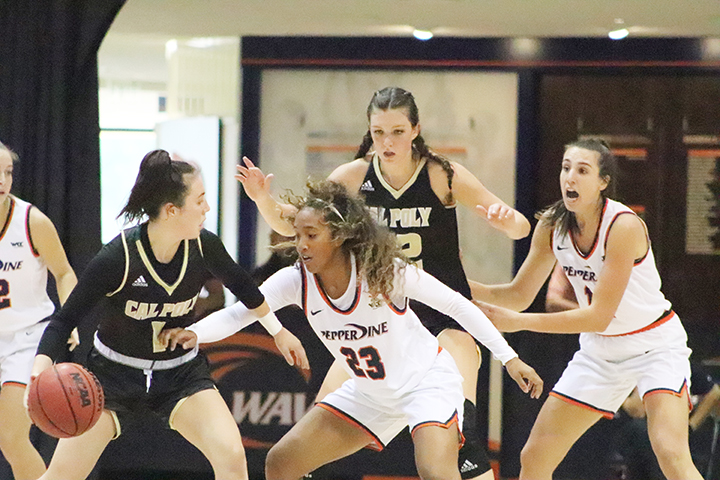 “[The] first home game as a head coach here is awesome, such a blessing,” Dowling said. ”I’m very grateful.” 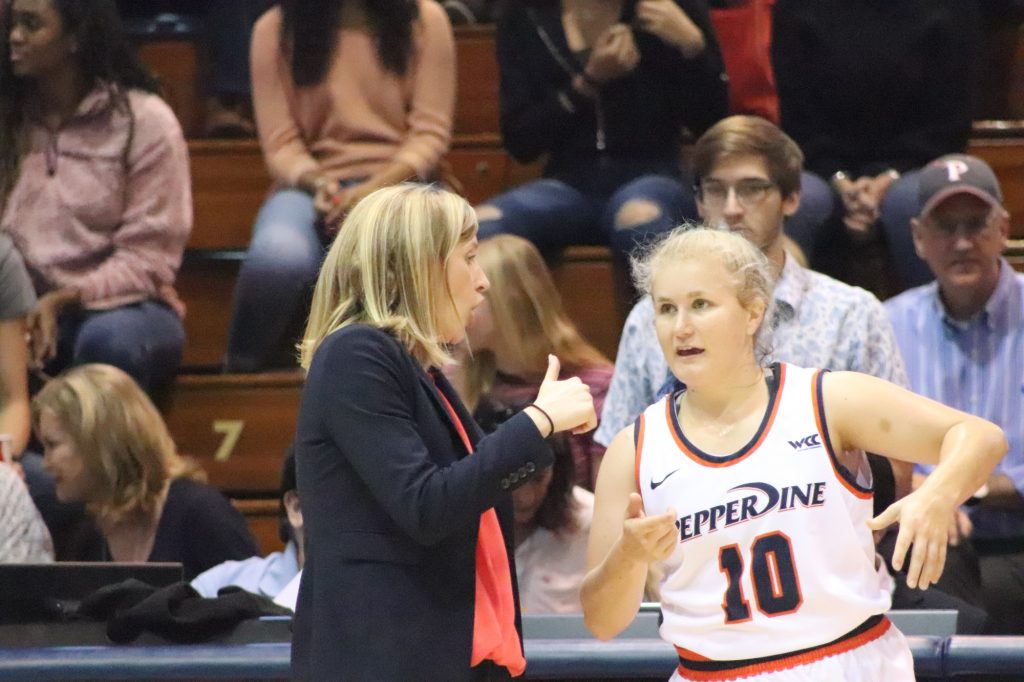 Two starters used the home opener as a time to shine, nailing down 36 of the 63 points themselves: sophomore guard Malia Bambrick scored 21, and redshirt senior guard Paige Fecske followed with 15.

The Waves posted a sound 48-85 defeat for their first game of the season Tuesday, Nov. 5, versus the Washington State University Cougars.

“We’ve been preparing for our first home game since summer,” Fecske said. “[We’ve had] lots of hard workouts, practice every day. All of it adds up to be prepared for today.”

The Waves were ready for tip-off when they received a technical, allowing the Mustangs to put up the first points on the scoreboard before the clock even began.

Once the game started, Bambrick’s two baskets put up the Waves’ first four points, but that didn’t stop the Mustangs from running away with the first quarter.

Pepperdine was down 9-17, and not even a full quarter had been completed. After a slow start with a 33.3% field goal shooting percentage, the Waves were not in a favorable place. 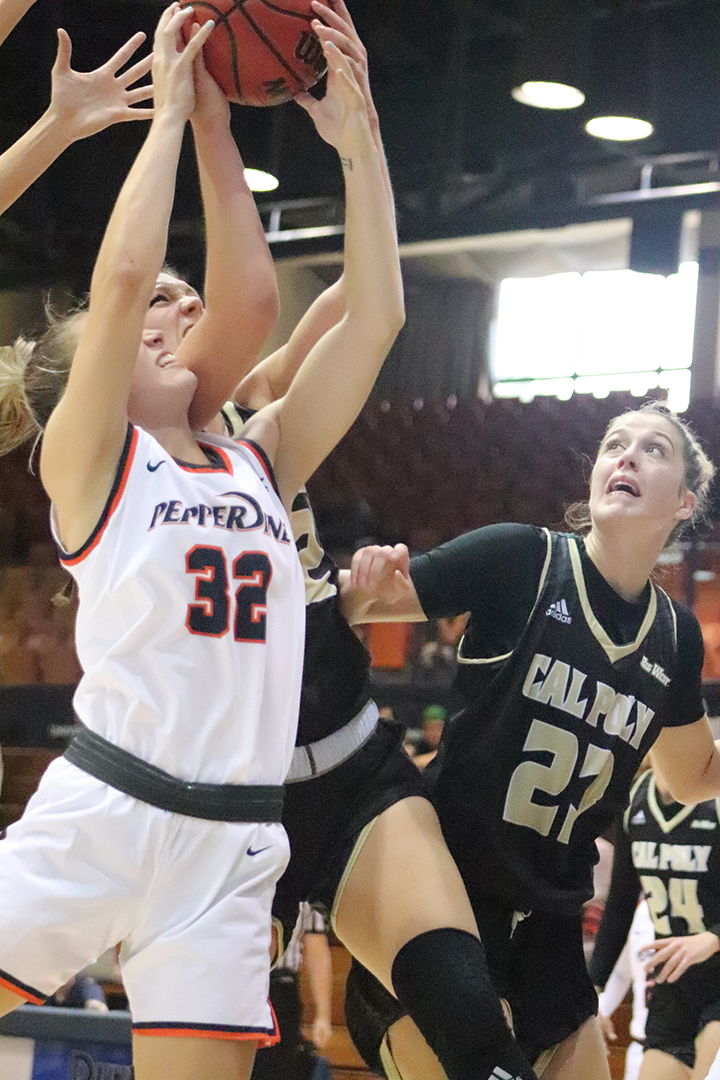 Fecske, one of the team’s leading scorers, was 0-6 in the field and behind the arc in the starting quarter.

“I definitely told myself to slow down and to finish my shot,” Fecske said. “And [to] just keep shooting; they’re going to fall at some point.”

Once her shot got back in place in the second quarter, there was no stopping her from dominating on the floor. 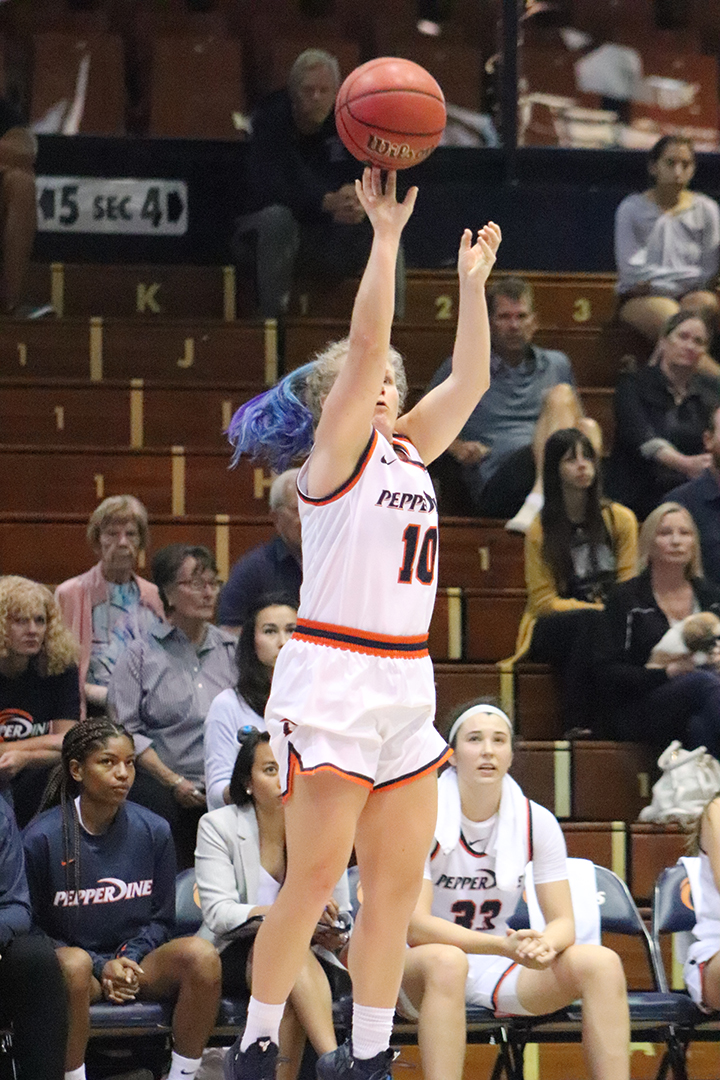 Redshirt senior guard Paige Fecske releases her shot for a jumper in the right corner Sunday.

All within 54 seconds, Fecske scored a three-pointer off a Cal Poly turnover, made one of two free throws, then swished a left wing shot to tie the score at 25-all.

The team took control of the court, rattling off a 13-0 scoring run in just under four minutes’ time.

Pepperdine trailed Cal Poly for almost 18 minutes but once Bambrick made a three and put the Waves up, 28-25, there was no turning back.

“[We were] focusing on rebounding, playing for each other, moving the ball more on offense — just the little things that we didn’t do at first,” Bambrick said. 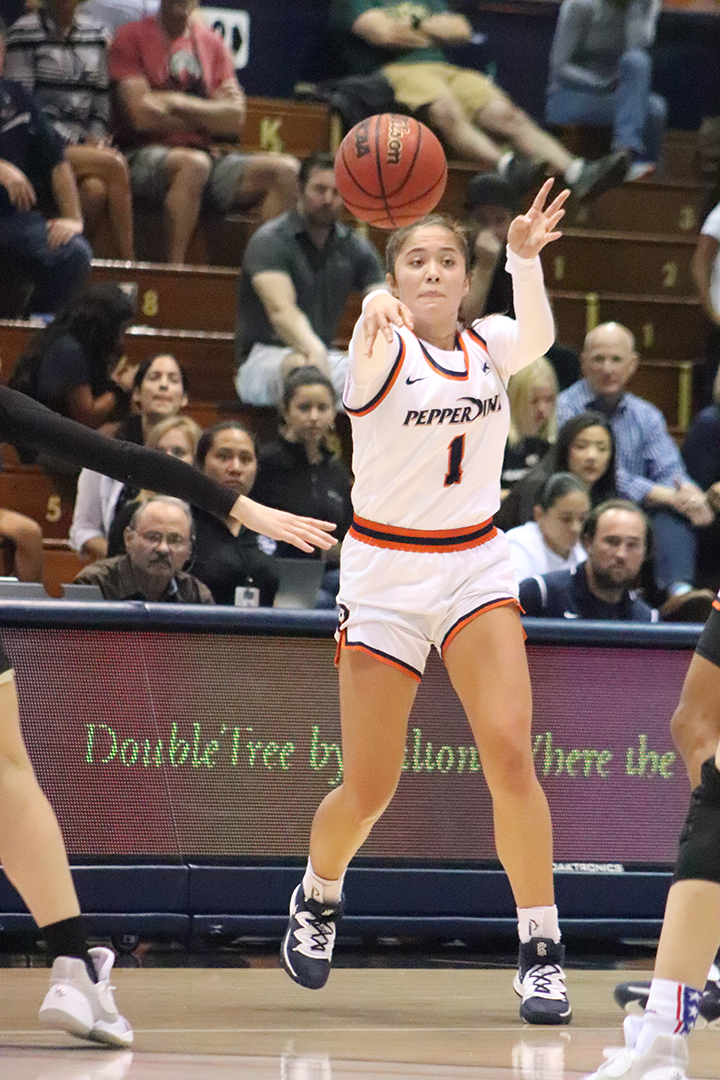 Sophomore guard Malia Bambrick makes a chest pass to a guard on the left wing.

A pick-up in the Waves defense held the Mustangs to a mere six points in the second quarter.

The Waves held on to their lead through the second half, with Bambrick hitting her stride and doubling her points, shooting a true percentage (three-pointers, field goals and free-throws) of 81%.

“Every practice, we’re working on our offense [and] shooting,” Bambrick said. “My teammates [are] doing what they can to get me open.”

Even though the two leading scorers were starters, the bench contributed 16 points, 10 of them in the first half. Junior forward Monique Andriuolo scored eight, making her the third-highest team scorer of the day.

“When people sub in from the bench, it should be a pickup, not a drop off, and we had no drop off,” Dowling said. “It’s a team game.”

Despite solid scoring, the Waves managed to get into foul trouble. Redshirt senior forward Ashleen Quirke fouled out a minute into the fourth quarter, redshirt freshman guard Jayla Ruffus-Milner had four and starter redshirt senior guard Hannah Friend received two of her three early on in the game. 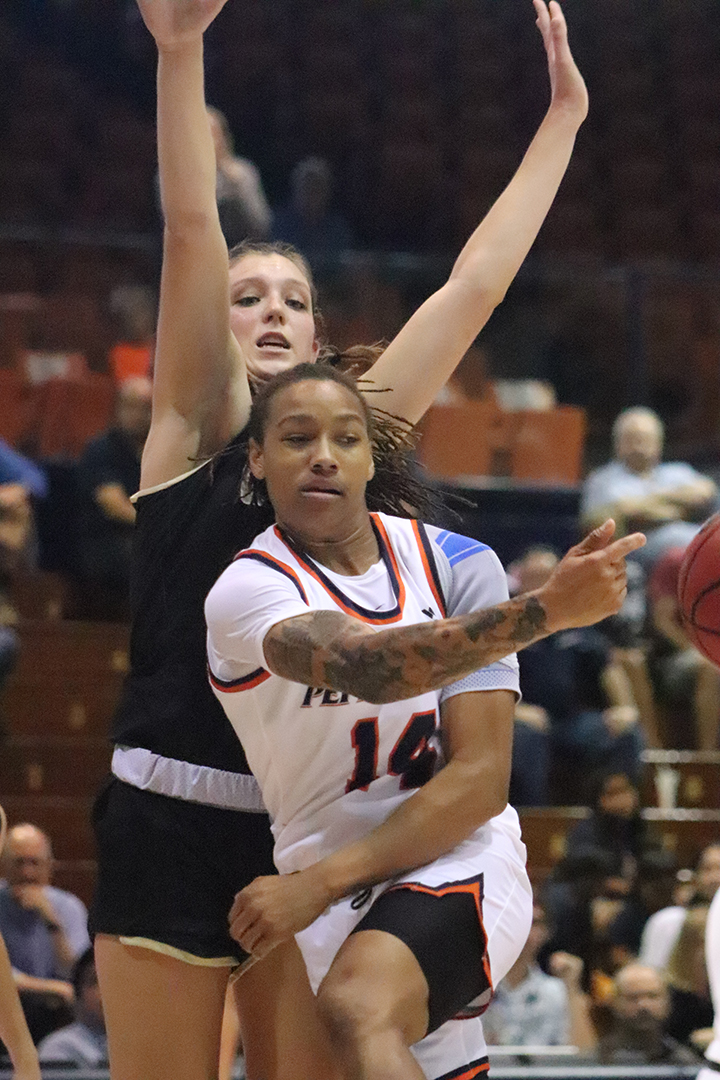 The Waves did not let the double bonus deter them from finishing the game strong, taking on a whopping 14-point margin in the third quarter. They held their consistent lead until the end buzzer.

“All the girls on this team have a lot of heart,” Fecske said. “They really, really want to win, so I think at the end of the day that if they have heart, that’s really all that matters.”

Pepperdine contributed their win to their defense surrounding post players.

“We were trying to work on our defense and helping the posts out there,” starter senior guard Barbara Sitanggan said. “Our defense was our key factor today.”

The defense translated into offense, as almost a quarter of Pepperdine’s points were because of forced defensive turnovers.

Being this early in the season, Dowling said she wants the team to improve on rebounding but the team took care of the ball well.

The Waves are back at home Friday, facing off with the University of Hawai‘i Rainbow Warriors at 7 p.m. in Firestone Fieldhouse. 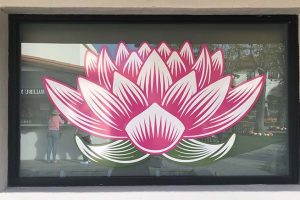 Photos by Jessica Stomberg Owner of SunLife Organics Khalil Rafati has made it his mission to be completely plastic-free...
Copyright 2013 Jupiter Premium Magazine Theme
Back to top