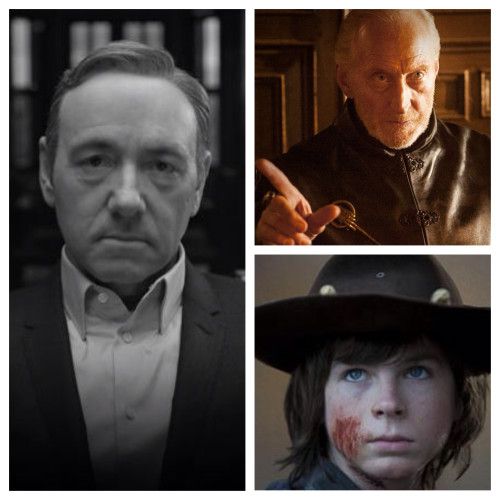 I was having a conversation with a friend recently regarding what we each consider to be the best shows currently on television. He told me his thoughts — to which I clearly disagreed — and I told him mine — to which he returned my sentiment in kind. But one of the things he said made me think a little more deeply about the type of serialized entertainment I most enjoy.

“You really hate the good guy, huh?” he said.

“What do you mean?” I replied.

“I’m just saying, the shows you like don’t exactly let the hero be the hero, do they?”

And he was right. My favorite shows currently on air are “The Walking Dead,” “Game of Thrones,” and “House of Cards,” three shows that by their very nature keep the good guy down while allowing the bad guy to reap the rewards. But I never looked at it like that until now, because frankly these shows are, in my opinion, very entertaining. So much so that I never stopped to think and realize that the success of these shows hangs on the notion of what I like to call the “perishable protagonist and the admirable antagonist.”

More simply, these shows exist on the premise that, despite the moral inclinations and actions of their leading heroes, they are destined to fail within the thematic constructs they exist in. Conversely, the leading enemies these heroes face are designed to expertly navigate these thematic constructs to succeed in their often nefarious deeds almost each and every time — and more often than not, look cool doing so. It’s not the typical structure for most television shows, and it is certainly a far cry from the situational dramas and comedies that like to play it safe with a set cast fulfilling their set roles each and every week.

What’s great about TWD, GoT and HoC is that you never know what’s going to happen, and you never know which of its characters, regardless of their importance to the show, will be facing the chopping block each week. It’s tense drama, and the surprises are the most genuine that you are likely to find in any entertainment medium. What these shows are able to do is take the notion of the “perishable protagonist and admirable antagonist” and construct a universe in which this notion can play out in understandable ways that allow this cycle to make sense, while creating characters with enough depth that the audience not only understands why they do what they do, but feels for them while they do it, regardless of whether it is for good or bad.

Take “The Walking Dead” for example. A zombie apocalypse has left the world a barren wasteland populated by the undead and rag-tag groups of survivors willing to do anything to live another day. It’s a world in which moral obligation is not just foolish, but a glaring weakness when it comes to survival. Many of the series’ characters have learned this the hard way, while other characters have taken the notion so closely to heart that they become a necessary evil. Protagonist Rick Grimes has let his moral compass allow those close to him to die, while The Governor, an antagonist, has forgone his morality in order protect his own interests. The idea of morality comes into play on the series multiple times, and the unforeseen consequences of juggling with it are what allow the show to shine, regardless of the revolving door nature of its characters. More so, the wicked nature of The Governor is, in a twisted way, relatable, in that the audience gets why he does what he does even though it is evil. Even beyond that, the audience revels in it, because they understand that the universe in which the show exists calls for a man like The Governor to do what he does.

“Game of Thrones” takes this idea of an admirable villain to new levels. The political drama set within a fantasized version of medieval times has seen many a fan screaming at their television sets whenever an emergent hero meets the end of a blade, because although the audience knows that none of the characters on the show are safe, they are nevertheless shocked at the circumstances that lead to a character’s demise. This is because the notion of evil in the “Game of Thrones” universe is even less black and white than we are accustomed to in the real world. Rather, evil is something that is ingrained in every character on the show in one way or another, and if you haven’t realized by now, every ounce of good in the “Game of Thrones” universe is very quickly extinguished. What’s left is a cast of characters who must necessitate evil in order to achieve their goals, and as an audience we come to not only accept that fact, but rejoice when our favorite characters do so successfully. The oft quoted sentiment that the characters of this universe share is that “when you play the game of thrones, you win or you die,” and as an audience, we tend to win every time someone dies.

“House of Cards” takes a deliberately slower pace when it comes to those who “die” on the series, in that the show revels in career deaths more so than the physical kind (although the physical kind do happen from time to time). The show is also unique in that it flips the notion of “the perishable protagonist and admirable antagonist” in an interesting way. Senator Frank Underwood is the main protagonist of the series, but he is no hero. He is evil incarnate, and his antagonists are in fact the heroes of the show who perish in the wake of his wrath. Underwood is a senator who expertly navigates the political landscape of the series to meet his own ends, oftentimes resorting to the most disgustingly evil tactics imaginable in what is a realistic take on the political hierarchy of Washington, D.C. As an audience, we become engrossed in Underwood’s story and even support his malicious intentions because we have no choice but to experience the series primarily from his point of view. Underwood even breaks the fourth wall on the show and addresses the audience directly, providing exposition on his thoughts and motives that further invests you in his tale of political depravity. “House of Cards” is a show that by its very nature allows evil to exist, because if that evil were stopped, the show would end.

Don’t get me wrong, I’m not a supporter of unbridled wickedness. I just think the shows mentioned above allow us as an audience to question what it means to be good or bad in an interesting and entertaining context. Whenever I finish an episode of one of these shows, I can’t help but sit back and ponder why I might think a heroic act was foolish, or an evil one was justified. These shows continuously bring to bear deeper questions about society and humanity in general, and when a show is able to make you think while simultaneously providing an entertaining respite from your day-to-day life, I think it is deserving of praise. More so than a predictable sitcom like “The Big Bang Theory,” as my foolish friend should contend.