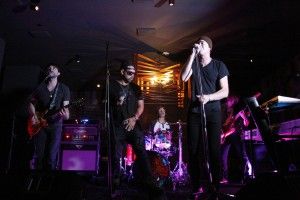 Imagine Coldplay, Kanye West and OneRepublic came together for an album. That’s what you get with 7lions, the newest band signed to 2101 Records that merges rock and hip-hop in a way that truly has not been done before. Sure, that’s what they all say — but these guys are serious.

7lions performed at the W hotel in Westwood on Sept. 20 to an intimate crowd for a special performance benefitting Rock the Vote, a movement aimed at “building political power for young people.” Even though the venue was small and the fan count was relatively sparse at this performance, that is hardly an indication of the success 7lions is likely to see in the very near future. They kept the crowd rocking with their newest tracks “One Man Symphony,” “Emergency,” “Taking Over” and “One More Time.” They also played their hit single “Born 2 Run” that is easily a fan favorite. The song reached quick mainstream popularity and has already been remixed to make the LA Kings/Born 2 Run, Stanley Cup theme.

7lions has made appearances at Summer Sessions Rock, Wango Tango and the CityWalk stage at Universal Studios. And the best part about these performances is their truly unique sound: They are just as good live as they are in their music videos, and their high energy on stage is contagious.

“I don’t know of a band today that is blending electro, pop and rock with the textures that we do,” the band’s rapper, Prophet, said in an interview. “Our classic rock texture with my poetic low tones creates a unique mixture of sounds … it’s hard to explain because there are so many different pieces.”

The band has been playing together for approximately three years and just recently signed with 2101 records. The formation of the band was fairly organic but ultimately began at mixer events held by an artist’s in-residency program in the L.A.  area. Prophet and keyboardist Morgan Taylor Reid were the masterminds behind the plan and the band naturally grew to include lead singer/guitarist Forrest Fulmer, lead guitar and back up vocalist Will Carpenter, bassist Daniel Hange and drummer Tony Tommasi to serve the musical needs of Prophet’s and Reid’s vision.

Even though the band recently signed with a record company, they are intent on keeping their own branding visible and recognizable. As Prophet said in his interview, the band “doesn’t want to be defined as a label,” and he maintains a serious interest in helping create the image of the band, having a say in all areas of the band’s image from promotional posters to band merchandise.

Some may wonder where the band’s name 7lions comes from considering there are only six members of the group. According to Prophet, it was a name the band came up with on the spot. The “seven” includes Fulmer’s younger brother who lost the battle to muscular dystrophy and whom the band believes is constantly looking down on them. The “lion” has a much more idealistic meaning behind it, serving as a symbol of loyalty, class and wealth. The album, which carries a refreshing positivity, is in large part about overcoming obstacles.

“All of us were in a place where overcoming struggle was a big part of what we were doing,” Prophet said. He also explained that some sentiments behind the name include “being the king of your own jungle,” “life is a jungle” and “I am a lion, hear me roar.”

Prophet explained that the band has been influenced by small local concerts that have a Caribbean or North African vibe. The combination of these set the band apart from others.

“We are on the cusp of a generation,” Prophet said. “There are no genre lines anymore and I think we as a band reflect that.”

Nobody knows the circumstances of this week’s bad parking job. If it occurred during an emergency situation,...
Copyright 2018 Pepperdine Graphic
Back to top